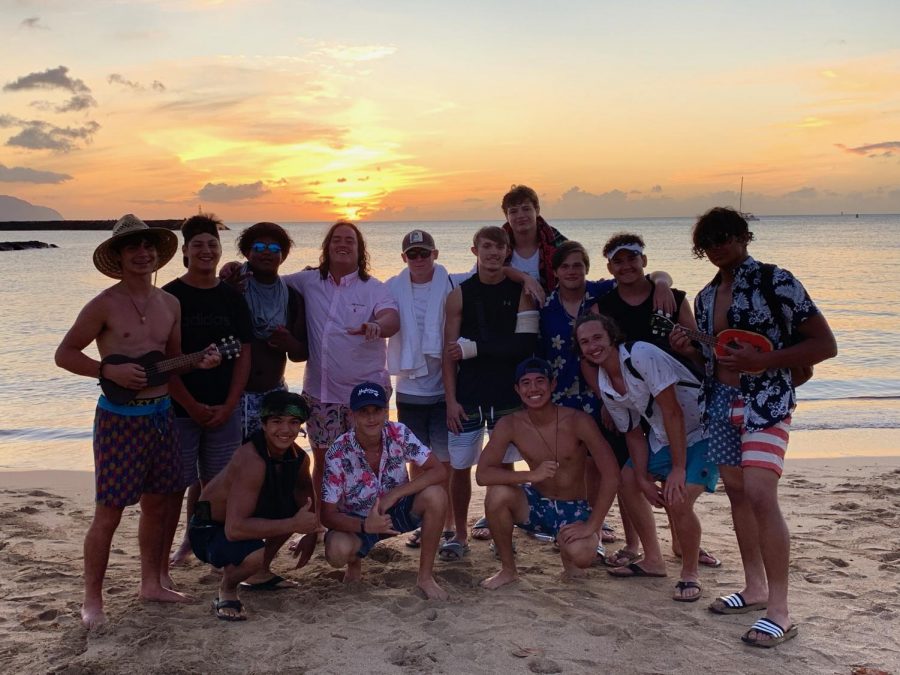 Photo Courtesy of Andrea McCall OHS football players visit the beach during their trip to Hawaii.

For many high schools, playing a football team from another state is a huge accomplishment. Not only did OHS varsity football have the opportunity to play out of state, but they also got to travel across an ocean to Hawaii to play James Campbell High School. Last year, JCHS came to Arizona and beat OHS, so OHS was eager to return the favor when they traveled to Hawaii.

While they came up short, losing 47-35 and falling to 1-2, the team still had a great experience in the tropical paradise.

“It was just a really cool opportunity to play a team that most schools in Arizona would never get the chance to play. Just going on a trip like that with your entire team and all your friends was like a once in a lifetime experience,” said Dylan Simonton, senior.

The team left for Hawaii on Sept 2 and stayed for almost a week, participating in many activities, ranging from visiting historical sites to enjoying the beautiful scenery.

“We went to different places in Hawaii. We went to Pearl Harbor, which was neat to see, and we went to the Polynesian cultural center; that was cool,” said Daymian Ortiz, senior.

One of the main differences between Hawaii and the mainland was the unique Hawaiian culture that players encountered.

Simonton felt that the Hawaiian culture was much more laid back, but that did not stop JHCS team from coming onto the field with more intensity.

“They’re more physical. They’re big. They bring a different energy to the field than they do here in AZ. They play with a lot of passion which is cool to see,” Ortiz said.

Because JCHS traveled to Arizona last year and stayed with the OHS players, many of the players recognized each other on the field.

“It was pretty cool seeing some familiar faces, like most games that you play you don’t know the kids that you’re playing unless you’ve grown up with them or worked out with them before,” Simonton said.

The different style of play caught OHS off guard, but they were able to turn it around in the second half as they were more prepared for the hard hitting Hawaiians.

“In the second half we definitely battled a lot better; we made plays when they needed to be made,” Ortiz said.

Brandon Craddock, sophomore, also felt that the defense was more prepared to take on JCHS in the second half.

“In the second half we fought through the challenges of the refs and the cheap shots and we feel like we came together at the end,” Craddock said.

Still, OHS’ slow start did the team in as their strong second half could not overcome their first half difficulties.

“The second half we came out really strong, much better than we did the first half. So really we’re just going to try to come out the same way that we did the entire game instead of starting slow,” Simonton said.

The loss was disappointing, especially since OHS was looking to avenge last year’s loss on their home field.

“Obviously we didn’t come out with the result we wanted, and it was frustrating coming out with another loss to them because we feel that we are the better team in terms of not only character but on the field. We’re disappointed, like we feel we should’ve won that game,” Simonton said.

OHS had another difficult matchup against Perry after returning home, who boasts one of the state’s top quarterbacks in Chubba Purdy. OHS had to contain the explosive quarterback to keep up with their high powered offense.

“Since I’m on defense I think our defense needs to stay physical and do our jobs, trust coaches and trust each other,” Craddock said.

Unfortunately for OHS, they came out with another loss to Perry. However, the team will look to rebound against Boulder Creek, having learned valuable lessons against JCHS and Perry. Of course, their trip to Hawaii will remain one of the highlights of the season and gave the OHS team a unique and memorable experience.

“I don’t know how many kids can say that they went across the ocean to Hawaii with their entire team,” Simonton said.