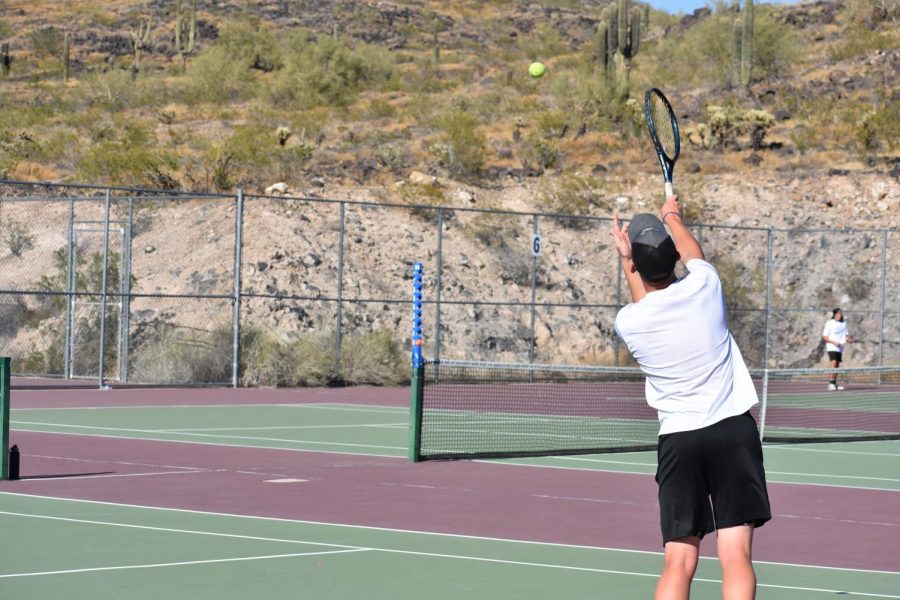 Boys: Since the OHS tennis season comes to a close, Varsity and JV manage to maintain a fairly successful season. Varsity managed to make ends meet with a final record of 9-4. Regardless of coming back late in the game, Boys tennis has been up to the task.

“Despite any shortcomings, I’m having a really good time this season,” said Haydon Knudson, junior, “This hasn’t exactly been a perfect year but I think a lot of us are just trying to make up for that.”

The Varsity team had been cutting it close with a 5-4 game against Liberty on April 8, and Ridge 5-4, on April 13. The team suffered some major losses but that didn’t stop them from having a good time.

“I’ve been able to improve a lot in terms of skill set, our coach has been really pushing us so that we play our absolute best. I think me, personally, I have improved quite significantly and I think that can be seen in my latest games,” Knudson said.

JV ended the season with a 10-3 record, with a recent 2-8 loss against Perry, a 5-4 win against Liberty, and a 7-2 against Mountain Ridge. While the season has been rocky, the team is certainly maintaining a positive attitude, no matter the case.

“I don’t know about anyone else, but I’ve been having an absolute blast on the court,” said Tyler Darr, junior.

Darr had to stay online for a large portion of the year for safety reasons, losing his rank in Varsity, going back down to JV.

“My main goal is getting my rank back, because I was Varsity until COVID hit and I had to go online. I really missed being out on the court with my friends, just having a good time.”

Girls tennis finished with a 4-9 record, just recently winning a game against Cibola with a strong 7-2 finish. While the season hasn’t gone as well as they had hoped, varsity has still pushed through a tough season with a positive frame of mind.

“It’s been a struggle but we’ve still been having fun,” said Rosie Nathal, senior.“A lot of the younger players have been bringing a really positive attitude to the game and that always helps during practice and games.”

A lot of athletes are still trying to get back into the swing of things due to being out of the game for so long.

“I think we’re all just happy to get back onto the court, this time around,” said Nathal. “t’s been a tough year for everyone so we’re just grateful to get back into the game.”

This year has definitely been a trial for most everyone, leaving it difficult for people to adapt to the current landscape.

“I think the worst part is we’re all so off balance,” said Jade Robey, sophomore. “This year has been crazy, and we’re also all trying to balance our school work because it feels like teachers are just pushing out so much work for us.”

While it’s been a trial this year, the team is looking on the bright side of things.

“We’re just hoping to finish off with a strong season,” Robey said.