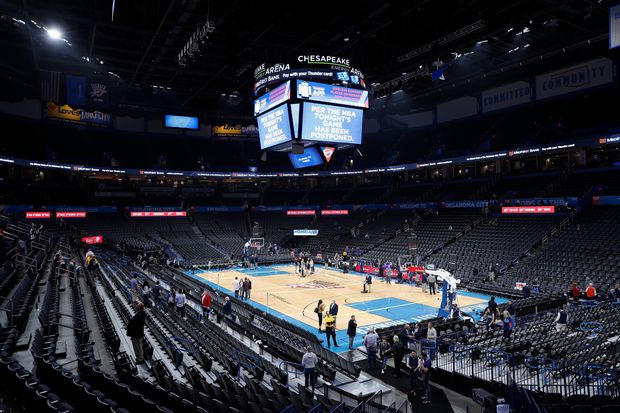 Fans leave the Chesapeake Energy Arena on March 11th after the game between the Oklahoma City Thunder and Utah Jazz was postponed due to coronavirus.

As the coronavirus pandemic continues to sweep across the globe, the sports world has seen some of the largest casualties, as major events and leagues have either been put on hold or cancelled. Sporting events on the international stage, such as The Masters and the Olympics have been postponed, while domestic leagues in Europe and the U.S. have also been forced to abruptly halt their seasons while they rapidly search for contingency plans to safely continue their seasons and crown a champion.

Here in the U.S., all of the Big 4 leagues have had to drastically alter their seasons in order to counter the spread of the virus, as the NHL, NBA, and MLB have indefinitely suspended their seasons while the NFL has moved the draft to a virtual format. These changes have had a large impact on the financial aspect of the sporting business, since the slew of cancelled events have caused the league to lose revenue from fans and sponsorships. This issue, paired with the public desire for sports, has caused leagues to look into unique solutions that have led to some controversy.

For example, the NFL has been widely criticized for continuing to hold the draft on the scheduled dates in late April. As the league has banned travel for coaches and players, teams are unable to physically scout draft prospects, forcing them to rely solely on game tape. This complicates the pre-draft process for team executives, forcing them to make decisions that could turn out to be incorrect due to their minimal knowledge about some players. The draft’s virtual format is also a significant departure from the NFL’s usual publicized event that draws in large numbers of fans. A fully virtual draft also poses countless issues, such as hacking or technological difficulties, which could prove to be devastating as teams have limited time to make their draft choice.

Still, despite the many drawbacks, the NFL’s decision is the right one. This format poses no safety risk to players, coaches, and executives, but still manages to get the job done. More importantly, the draft will prove to be a welcome sight for sports-starved fans. The NFL already had success with their wild free agency period, with players like Tom Brady and DeAndre Hopkins changing teams, which provided some sort of entertainment to sports fans while also promoting the upcoming season. Similarly, the draft will give sports fans and pundits something to discuss while the rest of the sports world stands still.

Unfortunately, other leagues such as the NBA and NHL were already in the middle of their season, while the MLB was just about to get started. For these leagues, they do not have the luxury of time if they hope to keep up with their yearly calendars. A common idea that has been proposed is to have a neutral site host all the games of the league. For instance, one possible route the MLB has suggested is playing all of their games at spring training parks in the Phoenix area. Teams and essential staff would be sequestered for that period of time, and games would be held without fans. Although the league would lose profits from ticket sales, their main source of revenue is television partnerships, which would stay intact with this proposed plan. Many have speculated that the NBA could take a similar path with their games being hosted in Las Vegas.

Once again, these plans are highly flawed, and could prove to have some safety issues for the players. 15 members of the NBA community, ranging from staff to players, have tested positive for the virus, and if even one person has the illness, they could easily spread it to all the players living in a quarantined area. Beyond the logistical issues, the idea of playing a game without the presence of fans in an eerie silence is far from ideal. Yet during these times, these leagues must prioritize finding a safe and fair solution to finishing their seasons, and their current ideas may prove to fulfill those requirements. If medical professionals deem these plans as sufficient, there should be no hesitation from league executives. Not only would resuming the season start up the incoming revenue, but it would also provide entertainment fans whom these leagues are built to cater towards. And so in spite of all the negativity, sports must find a way to come out on top, for their own good, and for the good of their loyal fans.