Chiefs and 49ers face off in Super Bowl LIV 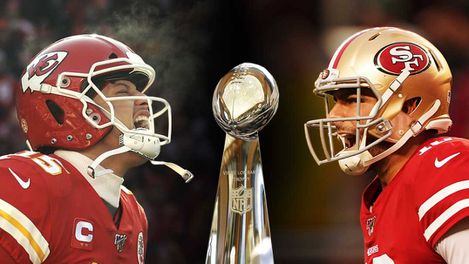 They say defense wins championships. Patrick Mahomes and his Kansas City Chiefs will be looking to change that narrative as they take on the San Francisco 49ers in Super Bowl LIV.

The Chiefs will bring their high-powered offense against the stout 49ers’ defense that has stifled almost every offense they have faced. Meanwhile, Mahomes has been torching defenses throughout the season, and has kicked it up to another gear in the playoffs. In the Divisional Round against the Houston Texans, Mahomes rallied the Chiefs from a 24 point deficit to score 41 unanswered points. Against the Tennessee Titans, Mahomes once again faced a double digit deficit, but led his team back with four touchdowns, including a memorable touchdown scramble just before half time.

The 49ers have a menacing pass rush to harass Mahomes in the pocket, but the challenge will be to keep him from extending plays with his legs. With Nick Bosa and Dee Ford on the edge and DeForest Buckner inside, the 49ers will look to keep Mahomes contained in the pocket, making for a fascinating matchup between the astounding quarterback and fantastic pass rush. The pass rush will also have to pressure Mahomes quickly so he doesn’t have time to find his speedy wide receivers or All-Pro tight end Travis Kelce.

On the other side of the ball, the 49ers will look to continue their success in the run game, likely relying on Raheem Mostert, who rushed for 220 yards and four touchdowns in the NFC Championship Game. The Chiefs have struggled against the run, but they were able to limit the Titans’ Derrick Henry to only 69 yards, so they could find a way to stop the 49ers rushing attack. However, the Chiefs will look to get an early lead in order to force Jimmy Garoppolo to make big-time throws. In two playoff games, he has only thrown 27 passes, and is untested on the game’s biggest stage, though he does have one of the game’s best weapons in tight end George Kittle. If the Chiefs can force the 49ers into passing downs, they can utilize their defensive strengths in the pass rush with Frank Clark and Chris Jones, as well as their secondary that features Tyrann Mathieu.

Finally, the game pits two brilliant coaches against each other with Andy Reid facing off against Kyle Shanahan, both of whom are searching for their first Super Bowl victory. Reid has proven to be one of the best coaches ever in the regular season, but has repeatedly come up short in the postseason, while Shanahan represents the new wave of young, offensive-minded coaches entering the NFL. The coaches’ gameplans will make for an interesting chess match between two teams with different strengths. In the end, one team will raise the coveted Vince Lombardi trophy in a classic matchup of offense versus defense.