Baseball dives headfirst into another season 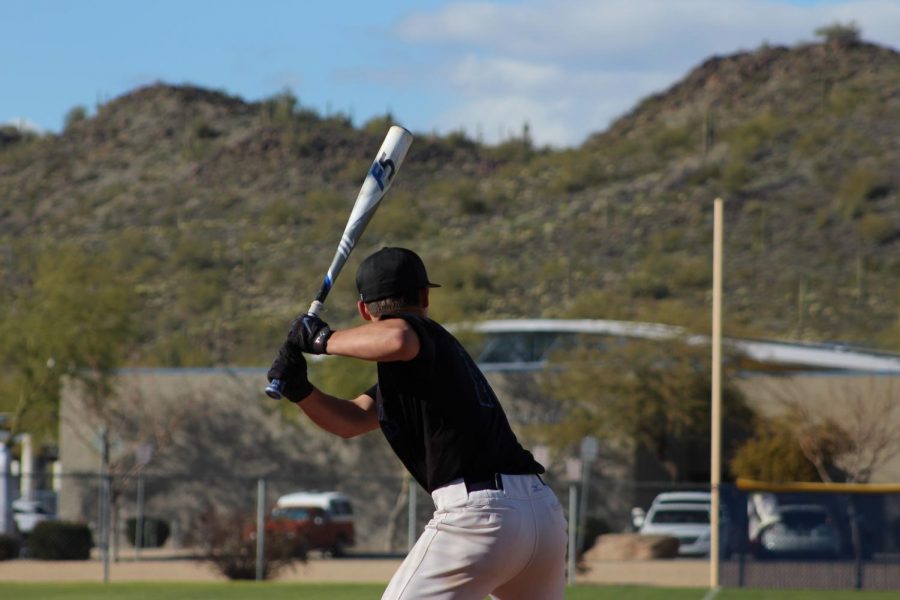 Levi Meyer, junior, hits during batting practice on February 19th in preparation for the start of their season.

As another season of winter sports comes to an end, spring sports step up to the challenge to make it a great season. Baseball in particular is one sport that is revved and ready to go.

After last year, with baseball winning the state championship, the team would like to see another successful season be added to the record books.

With most of the same players coming back for another season, teammates are taking advantage of the opportunity to build onto relationships created last year to create a stronger team atmosphere.

“We’ve actually gotten closer this year than last year cause we had a lot of underclassmen play last year so they didn’t really know much but this year we have a lot of upperclassmen so we feel more closer as a team,” said Brayden Nichols, senior.

A lot of training and preparation is needed from the players before season starts. Physically and mentally they need to be ready for the games and playoffs to come.

“[We’ve prepared from] a physical aspect just kind of working out, staying strong, throwing stuff like that. Mentally realizing that this is kind of a big year in fact coming off of the state championships just kind of preparing for that and realizing it’s going to take a whole team together not just one individual,” said Chance Van Dyke, senior.

With baseball’s win at state championships last season, there is a certain amount of pressure to do just as well and even better this season.

“This year I hope to accomplish making playoffs in baseball because last year we made playoffs and actually won state so I’d like to re-do that,” Nichols said.

Baseball has started off their season well with their first win against QCHS at 3-1, this being the first step towards their championship goals.

However, a team is not made of one person and therefore one person is not able to carry the entire team. It takes every player to make a successful season.

“I think we’ve realized that it needs to be a very well balanced team and growing in the fact that not one of us is going to carry the whole team it’s going to take a whole effort to come together,” Van Dyke said.

Just as many opportunities await JV as the varsity team. The prospects of a new season present themselves as some players may have the opportunity to play on varsity.

“I hope to, kind of like last year, just hit well, play well, and just overall do a good job. And then hopefully get some innings in varsity on the mound and the see what happens next year,” said Aidan Sullivan, sophomore.

With new coaches and fresh minds inspiring players, there is hope in maintaining an exciting season.

“We have some new coaches on staff, we have two new JV coaches that have really been helpful and are really going to work with us. And then one of my JV coaches moved up to varsity to help with the infielders on varsity. And we are always looking to bring out new drills just to keep everything fresh and to keep the guys working hard and trying to experience a little change as they go through the season,” Baumgartner said.

Part of being a good teammate is looking out for one another and building each other up when they feel at their lowest.

“We make sure that if someone makes mistakes we don’t let them get all worried about it we make them pick their heads up and move to the next play. We don’t want anyone to get their hopes down or anything cause it could create just all kinds of problems and bad chemistry,” Sullivan said.

As a whole, players feel prepared for the oncoming season and are excited to make it a great one.

“I’m excited, the team is pretty good I think for freshman obviously you’ve got things to work on but the goal is to win,” said Kolton Kurzman, freshman.

Because freshman are playing on a high school baseball team for the first time, there is a lot they can learn from their older and more experienced teammates on the varsity and JV teams.

All the team can hope for is to do their best and play to the best of their abilities as they hopefully win a few games.

“This season I hope to win as many games as possible and maybe get bumped up to the JV team,” said Ethan Colton, freshman.

Players such as Colton have confidence in their team and their teammates.

“I feel like we have a pretty good team and we could do well this season and years to come,” Colton said.

*Due to The Talon going to print, scores for the Mountain Pointe can be found at AZpreps365.