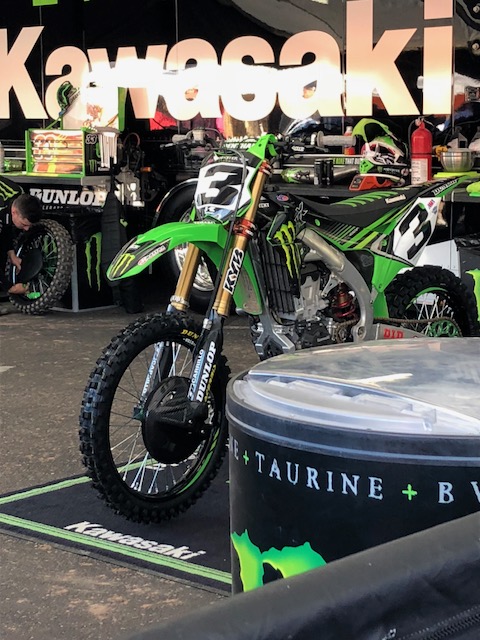 Eli Tomac, 450SX main event winner, has his bike worked on in between qualifying by his mechanic.

There is no better way to celebrate the new year than with Monster Energy AMA Supercross. Round four of the series was held at the University of Phoenix stadium on Jan. 27.

The night was filled with twists and turns as riders battled to get out of the gate the fastest.

The 250SX fastest qualifier was Joey Savatgy, who was close to setting one of the fastest lap times of the night, 55.872 seconds. Savatgy came into the Glendale race with the red plate, along with Shane McElrath. The two being tied in the points standing after Supercross’s introduction of the Triple Crown.

The 450SX fastest qualifier was Jason Anderson, with a lap time of 55.709 seconds. Anderson won in Houston, Texas on Jan. 13, giving him the red plate for Anaheim two and the Glendale race. After round four, he would continue to keep the red plate going into Oakland.

After sustaining a hard crash in the whoops section, Savatgy was forced to line up for the LCQ in order to try and qualify for the main event. Luckily, he was left mostly unharmed and won the LCQ.

On the other hand, the shared points leader, McElrath, won the 250 SX Heat Race one and did not need to race the LCQ.

With a very stacked and competitive 250 west coast class this year, there is a three way battle for the points standing between Savatgy, McElrath, and Plessinger, with barely five points separating third from first.

The 450SX Heat Race one was won by Justin Brayton, as he claimed the holeshot in the very beginning of the race and was able to defend his position until the end.

Heat Race two was won by Anderson who had a slight interference with riders Cole Seely and Blake Baggett. While Anderson was able to continue riding forward, Seely and Baggett went down on a corner and were forced to fight their way through the pack to try and make a qualifying position.

After the completion of both classes’ LCQ race, it was time to drop the gate for the main events.

The 250SX main was won by Plessinger, but not without a lot of hard passing and determination. The race started with Savatgy getting the holeshot, however on lap two, McElrath caught Savatgy in the whoops and was able to pull ahead. It was only a few turns later when Plessinger was also able to get around Savatgy.

The next few laps was a toss up between McElrath and Plessinger as they continued to go back and forth on making moves. After nearly crashing three times in the rhythm section, McElrath was passed and first now belonged to Plessinger.

After crashing in the main, Savatgy was able to end with a fourth place finish right behind Adam Cianciarulo.

The winner Aaron Plessinger, proceeded to do the “worm” after his victory and now gets to enjoy having a red plate on his bike.

On a roll, the 450SX main event was won by Eli Tomac. After winning last week in Anaheim, Tomac came into the weekend strong. After getting a good start, Tomac was able to start by pulling away from the pack as Weston Peick and Justin Barcia began fighting for second.

The battle began to heat up quickly as some of the best riders in the country found their way through the pack and started to make a run at everyone in front. Heat race winner, Jason Anderson, struggled, as he started being passed by numerous riders. Coming back from his hospitalizing crash, Ken Roczen found his way into third place and finished the night there.

As the battle behind Tomac got more intense, Barcia began cutting down Tomac’s lead. However with small mistakes made by both Barcia and Roczen, no one would catch up to Tomac to take the win.

While Tomac did win two weekends in a row, he is sitting at 10th with 53 points. Red plate holder, Anderson, sits at first with 89 points.