Swim and dive tests the waters of a new season 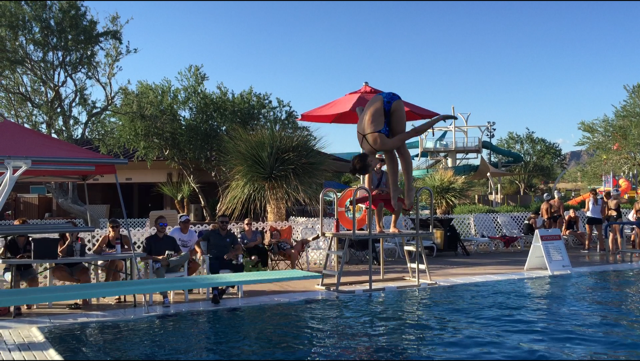 Diver Addison Krupp wows the judges with an inward dive. On September 8, the OHS swim and dive team conquered their first meet.

Get your floaties out because swim and dive has finally started. The new season began its journey early August in preparation for their first two meets on September 8 and 15.

Both teams have welcomed new members as well as a new coach. The dive team was excited to introduce coach Tyler Gabel to the club.

Both sports have put in the time and effort for upcoming meets. Zach Benjamin, senior swim captain, is extremely proud of his team and other team captains for their work so far this year.

“We have a lot of new people who have never swam before, but they are doing really good,” Benjamin said.

Freshman athletes on the team are also putting in all their energy to help benefit their school in any way possible.

“On every swim team your goal is to beat the clock and get some points for your team,” said Lena Ericson, freshman.

The duo are just now dipping their feet into this competitive season and are excited to see what is to come.

“My goals for this season are to improve my diving skills and learn as much as I can from others,” said Addison Krupp, sophomore.