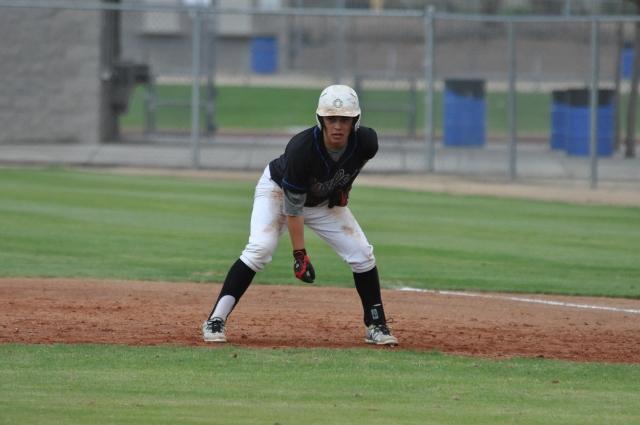 Dakota Solis, senior, stares at homeplate, ready to run quickly, as soon as his teammate hits the ball.

The baseball team ended their season with a loss to Chandler in the first round of playoffs, finishing the season with an overall record of 18-13.
“We go into every season with three goals- to beat Ridge twice, to make the playoffs and then to make it to the final eight, and we got two of those three goals done,” said Colby Wyatt, junior.
According to Jeff Baumgartner, head coach, the team also improved their bond this season.
“I thought the chemistry was a lot better this year. I think the guys at least liked each other and played hard for each other,” Baumgartner said.
According to Baumgartner, overall the season went pretty well since “we were a really young, inexperienced team and we came out and we achieved some
of our goals.”
Losing in the first round of playoffs has definitely made an impression on the team’s goals for next year.
“Next year they definitely should have the fight and the urge to want to go out there and be the best that they can be,” said Dakota Solis, senior.
Baumgartner hopes that next year the team will strive to be even more of a team.