The Chief Chaplain at Harvard is an Atheist?

Greg Epstein, author of, Good Without God, which millions of non-religious people believe in, has been Harvard University’s humanist chaplain since 2005, but in 2021 he was given the honor of being chief chaplain. As Harvard’s new chief chaplain, he will provide activities with over 40 chaplains from 20 different religious, ethical, and spiritual traditions.

There is only one concern that people are questioning; Epstein is an atheist.

People are starting to question the fact that he is an atheist because he is working in a religious position. Although people think a person who doesn’t believe in god should not be a chaplain, what he stands for and the things he is trying to do is absolutely outstanding.

Although he is an atheist, he is bringing all religions together and giving everyone the opportunity to find what their culture is. He hopes that his students find nirvana and peace. Epstein believes that everyone should feel equal at the school regardless of their religion.

Epstein hopes to reach out to students and help them find their religious or spiritual beliefs that they did not know they believed in. Every day he helps kids find what they believe in and find happiness. Epstein’s goal is to promote human connection; he wants to unite religious and nonreligious people because he believes that what everyone needs is connection with each other.

Even though Epstein promotes a positive message and is trying to accomplish his biggest goals, many people still believe that a chaplain should not be an atheist. Even though he is a non-religious man in a religious position, that should not be an issue. Epstein stands for something greater than just one religion, he stands for all religions. He stands for equality and wants to show younger people that even if you don’t know your own religion, or do know, you can find a place where your beliefs are accepted.

The goals Epstein is trying to reach and how he is reaching out to students is amazing. He is giving non-religious, spiritual, and people that have no idea what their beliefs are, a safe place to attend and be a part of while at school.

Epstein grew up in a Jewish household and was raised very religious. When he grew up, he started to have his own beliefs and that led him to being an atheist. Epstein knows what it’s like to be forced to follow a religion and being confused about your religious beliefs. When he found out about what he believes in, he wanted to help other people discover what they believed in.

In a world full of darkness, Epstein is the light at the end of the road for many kids. He’s giving young adults a safe place; a place where they can go to be with people that understand them. Epstein wants to create a safe, calm campus for students to find themselves through church whether religious or cultural beliefs. Even though people think it is wrong for the head chaplain to be an atheist, it is a fantastic thing because what he stands for is equality and human connection. 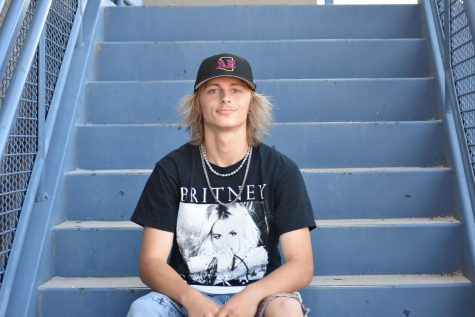 My name is Michael Brown and I am a staff writer on the Talon. This is my first year being on the Talon and I am very excited to be a part of the team....