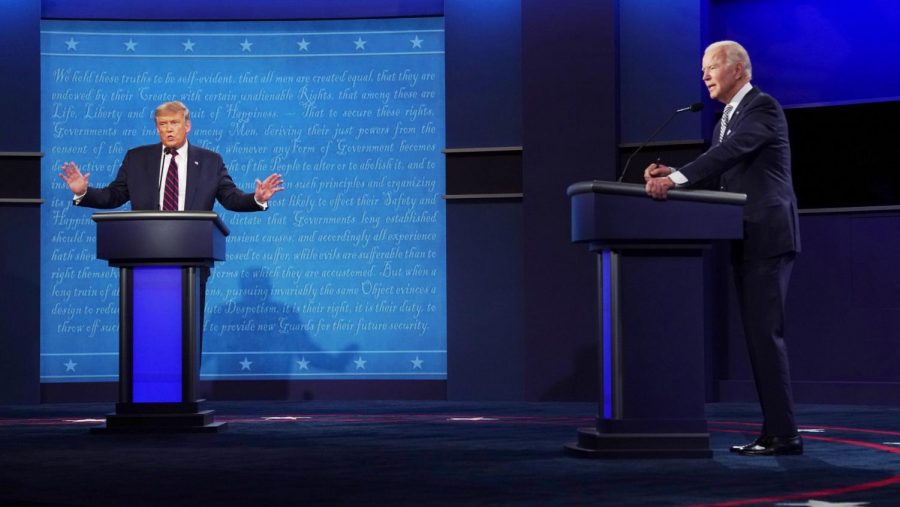 The 2020 presidential election is less than two months away. This election has the ability to change the future in a major way with president Trump running against Joe Biden. There is no doubt that both candidates have their flaws but the United States needs the more qualified candidate for the protection of its future.

Racism is a topic that comes up often when the names Trump or Biden are mentioned. There is no doubt that Joe Biden has said many racist statements in the last six months alone. For example in an interview in May with Charlamagne tha God, Joe Biden said, “if you have a problem figuring out whether you’re for me or Trump then you ain’t black.” Now since when does race restrict people to a certain political party or who they vote for? Joe Biden has also said, “what you all know but most people don’t know, unlike the African American community with notable exceptions the Latino community is an incredibly diverse community.” Joe Biden seemingly doesn’t have any problem spewing out these hateful and racist comments. Joe Biden also helped write the 1994 crime bill which led to mass incarceration of African Americans. In 1974 Biden even opposed integration of busing in America. He even said that he didn’t want his children growing up in a ‘racial jungle’.

Donald Trump on the other hand helps the African American community. In a recent police reform executive order he released thousands from jail with 90% of those people released being black. Also under the Trump Pence administration there has been record low black unemployment (5.5%); whereas under the Obama Biden administration the record low was 7.9%.

Trump is not only a helpful and effective president for the Black community but helpful for other minorities. Donald Trump is the first president to go into office supporting the LGBT community and even launched an effort to decriminalize homosexuality around the globe. Joe Biden has quite a record in his 51 years in politics. Biden supported the “don’t ask, don’t tell” policy in the 1990s which prohibited openly gay people serving in the military. Biden also supported the Defense of Marriage Act of 1996 which barred legal recognition of same sex marriages.

Something else to note is that Trump has broken a 39 year streak of US presidents either starting a war or bringing the United States into one. He also played a vital role in a peace agreement between Israel and the United Arab Emirates. Both of these achievements have led to him being nominated for Nobel peace prizes. Joe Biden on the other hand was one of the 77 senators in 2002 to vote for the war in Iraq and he still struggles to explain his choice.

Although Trump has had many great accomplishments, his main flaw is his ego. Trump is very egotistical and even narcissistic. He lets his pride get in the way of his duty to this country. This can be seen as a less than admirable trait, while Biden, on the other hand, struggles to make coherent sentences. Joe Biden doesn’t even know the first paragraph of the Declaration of Independence. He actually said, “we hold these truths to be self evident that all men and women are created by the oh you know you know the thing.” It seems like every time Biden gives a speech he either forgets how to talk or where he is.

It’s clear that Biden isn’t the right president for America. In the 51 years Biden’s been in politics he’s always been on the wrong side of history and he will keep claiming that he will fix this country but he hasn’t shown how. He hasn’t fixed this country in the last 51 years so why will he do it in the next four? This country needs a strong leader and it isn’t Biden. Trump has had many achievements in his four years in office and another four years is what the United States needs.

My name is Jackson Morgan I am a sophomore and this is my first year writing for The Talon as a staff writer. I am also on the wrestling team. I spend...