Why Streaming Is Dominating The Music Market 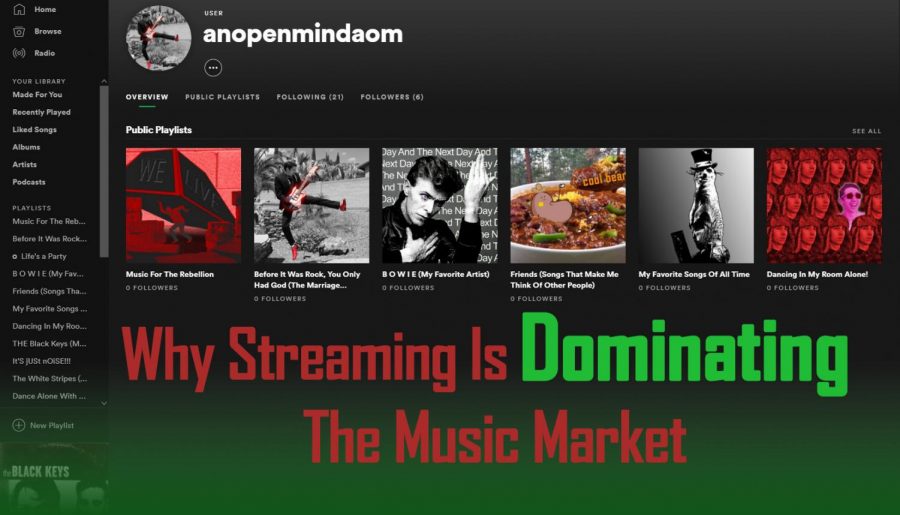 Perhaps no other art form has witnessed so much change in its distribution to the masses in the past few decades as the world of music. Rewind to the ‘80s as the era of cassette tapes died away, and CDs began dominating the market. Then at the turn of the century, the internet flipped the music world on its head. No longer did one need a physical copy of a record in order to blast their favorite band’s tunes. Now, just like so many of our other commodities, all it takes is the click of a button. Music streaming, which was originally met with hostility from the music industry, is now being fully embraced as the main catalyst for delivering music to hungry consumers. The road to getting to this point was a bumpy one, and now more than ever, it’s evident that this is a one way street.

Starting in a Dark World:

Music streaming in its infancy started in a rather dark chapter of the online world. In the early 2000s, websites allowed for the illegal copying and distribution of music on a mass scale. The most notable of these online thieves being Napster, a service that allowed anyone to upload and download songs without paying a penny. Once legal action was taken against these websites, the music industry took a sigh of relief. However, the world was now fully up to speed on the idea of having all their music in a digital format, and it was only a matter of time before someone took it to the next level.

Enter the online streaming industry. The earliest pioneers of the music streaming world created the foundation for the services we have today. Pandora, launched in 2005, allowed consumers to make their own personalized radio station with a $10 fee for advertisement free listening. MySpace Music gave a taste of what was to come by allowing the direct playing of tracks from artists, however, these artists were less well known indie artists. The real kicker came in 2008 when a small company based in Sweden took all the elements, and put them together. Spotify allowed users to stream music directly, gave them the ability to personalize what they listen to, and provided an ad-free subscription option with their new service. Their humble beginnings were eventually challenged by corporate mega giants over the following years such as Amazon and Google Music looking to take their own piece of the pie. Despite the multitude of different services, all of them essentially had the same idea, and their effects were changing the way people listen to music.

Over the past decade, streaming services have made huge gains in profit while downloads and physical music sales have continued to decline, and in 2015, for the first time ever, music streaming revenue surpassed both downloads and physical sales. It’s really no wonder why music streaming has taken the market by storm. Consumer preference always leans towards the more affordable, and more readily achievable products. Music streaming is the pinnacle of both of these factors. The cost for ad free listening to a music streaming service’s entire catalogue tends to be $10 a month. When you put that in perspective, that means for just $120 a year you have access to millions of songs from as early as ‘20s speakeasy jazz and ‘50s rock n’ roll, to modern pop hits. Compare that to listening to new music on a CD or record player. New CDs tend to sell anywhere from $10 to $20. That means if you are an avid music listener, you’re spending more than the average monthly subscription to millions of songs on one CD. Also, a CD isn’t always readily available to listen to. You have to have a CD player on standby. Meanwhile, music streaming can happen on your computer at home, connected via bluetooth on your car radio, or on the go with your phone.

Spotify serves as the number one music streaming service in the world with over 231 million users. The company’s growth would obviously amount to nothing without the artists who make the music possible. Currently, the site has over one million verified artists, ranging from the most popular stars to underground rock bands, who many of which are paid by Spotify based off of the number of plays their songs have.

These artists are what made consumers willing to jump on the music streaming bandwagon, but acquiring the artists wasn’t easy; in fact, the service has struggled to keep certain artists happy with their paychecks. This challenge is worth mentioning considering it’s one of the largest battles happening in the music streaming world. Many question if artists are being paid enough by services such as Apple Music, Spotify, or Google Music for their work. However, paychecks aside, it’s tough for artists to say no to streaming services. At this point, if they can’t get a hit on the radio, how else can they get their music heard when streaming is becoming the sole way to listen to music? The debate has yet to be settled, but certain benefits for artists from music streaming services such as free exposure to a large base of music listeners, and promotion of their music at no extra charge can’t be overlooked.

Streaming has become the number one way to listen to music in this digital age with consumers embracing its diversity, and with the music industry converting in its favor, it’s safe to say that it’s here to stay. There might be those that will happily purchase physical copies to support their favorite artists, and swear by the warm sound of a record player, but no matter their tastes, the number of plays will keep on growing.