Star Wars and the never ending journey across the galaxy 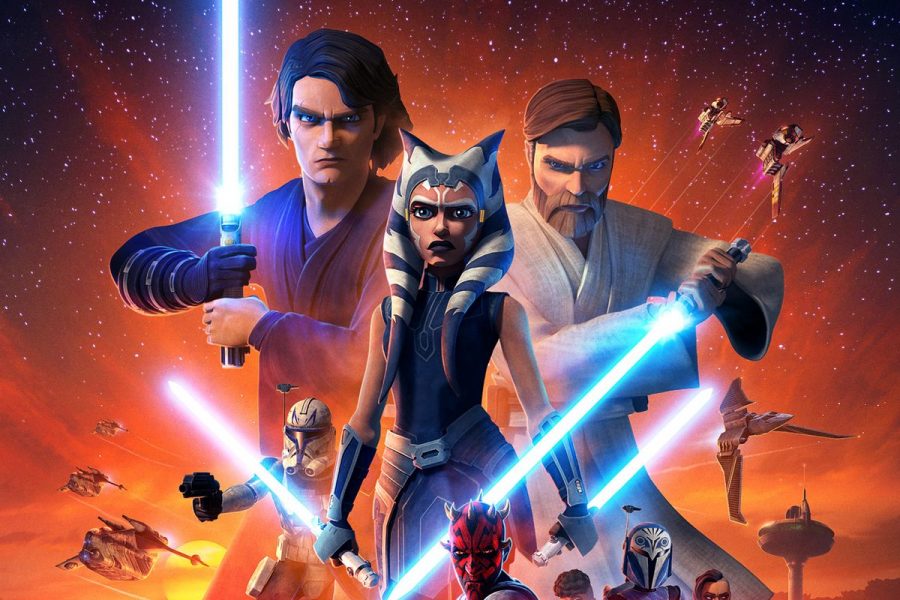 It’s been over 40 years since Luke Skywalker destroyed the first Death Star, and lit the spark of hope that fueled the flame of the rebellion. In one way or another, everyone has been exposed to the vast galaxy that is Star Wars, whether it be movies, cartoons, comics, books, or video games. Sequel fan, prequel fan, original fan, or all of the above, Star Wars is internationally beloved.

The impact its had is unprecedented. It’s a franchise that’s irreplaceable with all of its lore and beautiful world building with all of the books, cartoons, and spin-off movies. Despite the Skywalker Saga being over, Lucasfilm and Disney are still going full sail on multiple television productions, and continuations of previously ended productions.

On Feb 21, Disney Plus aired the seventh and final season of “Star Wars: The Clone Wars”. The show is meant to bridge the time gap between “Star Wars: Attack of the Clones”and “Star Wars: Revenge of the Sith”. Keep in mind, this show happened before Disney bought the Star Wars IP. Before the show aired on Cartoon Network, the movie sharing the same name hit theaters. Both the movie and the show follow the war between the Galactic Republic and the Separist Movement, spanning across the large array of characters and planets and building on top of the already massive world of Star Wars. Most of the episodes follow Jedi Knight Anakin Skywalker, Jedi Master Obi Wan Kenobi, and Anakin’s new padawan, Ahsoka Tano, who has become a fan favorite of the series.

Around 2012, the show moved to Disney XD after George Lucas sold the rights to Star Wars. In 2014, Disney XD aired what fans thought was the final episode of the beloved series, leaving loose ends, never to be explained, or so everyone thought. Then in 2017, the trailer for season seven dropped at Comic Con. Nobody had expected this. In the wise words of Sheev Palpatine, “a surprise to be sure, but a welcome one”. The show has received more praise than any Star Wars media that’s come out in the past decade. As for the Disney Star Wars films, not so much.

In 2015, Disney released “Star Wars: The Force Awakens”, the highly anticipated continuation of the Skywalker Saga. The movie garnered over two billion dollars and revived hype for the once dormant franchise. The majority of critics and fans liked the movie, despite its flaws, and were ready for a sequel. Then, all that excitement for the continuation of the story died, when “Star Wars: The Last Jedi” hit theaters in 2017. Not only did the film consist of so many logical errors and poor writing, it managed to destroy the character of Luke Skywalker and contradict so much of the established lore. In spite of the film being objectively bad, it still made over a billion dollars. Dedicated Star Wars fans lost any passion for the continuation of the franchise.

These new characters that were brought in were shallow, with little to no consistency or likeable traits. Nobody wanted Rey or Finn; they wanted to see the real Luke Skywalker, Princess Leia, and Han Solo together, fighting for peace and prosperity. We haven’t seen the main trio on screen since 1983, and now we never will. We’ve been left with a new group of characters that lack any team chemistry or flair. The prequels may have been poorly acted and constructed, but it was the characters that made it so beloved. Rey, Poe, Finn, Rose, and all of these characters are written so flat and inconsistently. None of them have any well written arcs. It has nothing to do with the actors, and everything to do with the deficient script. The only good thing to come out of this sequel trilogy is that it strengthened the love fans have for the prequels and the originals.

Disney is like the little engine that could, putting as much Star Wars content out as humanly possible. So far, three shows have been officially confirmed and will start filming this year, going into 2021. “The Mandalorian” was a triumph for Star Wars and will be receiving a season two. A spin-off of “Rogue One: A Star Wars Story” will also be filming later this year, following Cassian Andor, loyal hero of the rebellion. Lastly, fans will finally receive a limited series, following Ewan McGregor as Obi Wan Kenobi, in his years of hiding on Tatooine, protecting a young Luke Skywalker.

Disney has created this trail of twists and turns for Star Wars, creating content ranging from horrible to a stellar space opera. The future of this wonderful franchise is up in the air in terms of quality storytelling. Fans of pre-Disney Star Wars can only hope that it will one day regain the magic that was once lost.