Trump’s State of the Union not lacking in entertainment 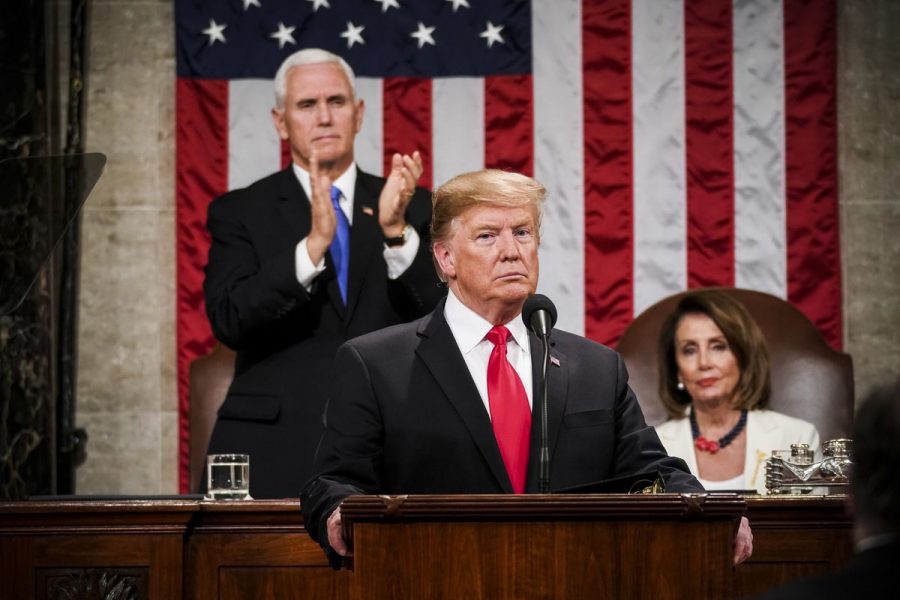 President Donald Trump delivered his annual State of the Union, flaunting his accomplishments, introducing special guests, and surprisingly awarding the Presidential Medal of Freedom. On the eve of his acquittal for abuse of power and obstruction of justice, Trump was mostly tame in his speech, rarely bringing up controversial issues and focusing on the positives of the growing economy.

Trump focused on the economic growth that has occurred during his presidency. The president declared that seven million new jobs had been created during his administration, while unemployment was at an all time low for many minority groups. Additionally, he touched on international issues like trade and immigration. He spoke about how he pulled American out of North American Free Trade Agreement (NAFTA), and had helped the United States become more respected internationally. As for immigration, he remained steadfast in his approach against immigrants, criticizing sanctuary cities for their housing of illegal immigrants. Once again, Trump renewed promises that the wall between Mexico and America would be built as he championed his “America First” ideology.

Perhaps most entertaining to the causal viewers were Trump’s guests. It was evident that Trump was attempting to sway black voters in the upcoming elections as he focused on the stories of many African Americans, ranging from Tuskegee Airmen to an army veteran who struggled with drug abuse. Trump also introduced Juan Guaido, the opposition leader in Venezuela against Nicolas Maduro, and declared that America would support Venezuelans’ fight for a rightful government. These were the rare moments that were applauded by both Democrats and Republicans, as they came together on these heartwarming topics.

Yet President Trump also showcased his entertainment flair, since he clearly tried to keep viewers captivated. In a seemingly ordinary move, Trump called attention to a woman and her children in the audience whose father was in the military abroad, and then surprisingly, the president brought him out to be reunited with his family on national television. While the scene was heartwarming, it felt like it should have been part of a television show, not the State of the Union. But perhaps the biggest surprise was Trump awarding the prestigious Presidential Medal of Freedom to the former conservative television host Rush Limbaugh, who had recently been diagnosed with cancer. Though he deserved sympathy, it was questionable whether Limbaugh deserved this award. This was a man who had made countless racist remarks, such as claiming the NBA was played between Bloods and Crips due to the large amount of black players.

Finally, the highlight of the speech came at the end. House Speaker Nancy Pelosi was seen ripping up the copy of Trump’s speech given to her, leading to mockery from Republicans. Some speculate she took this action because Trump refused to shake her hand before the speech, but still the move was heavily criticized. Overall, the State of the Union provided some idea to the direction Trump will America, but also resulted in an entertaining political chess match for viewers.