The Umbrella Academy portrays superheroes as not so super 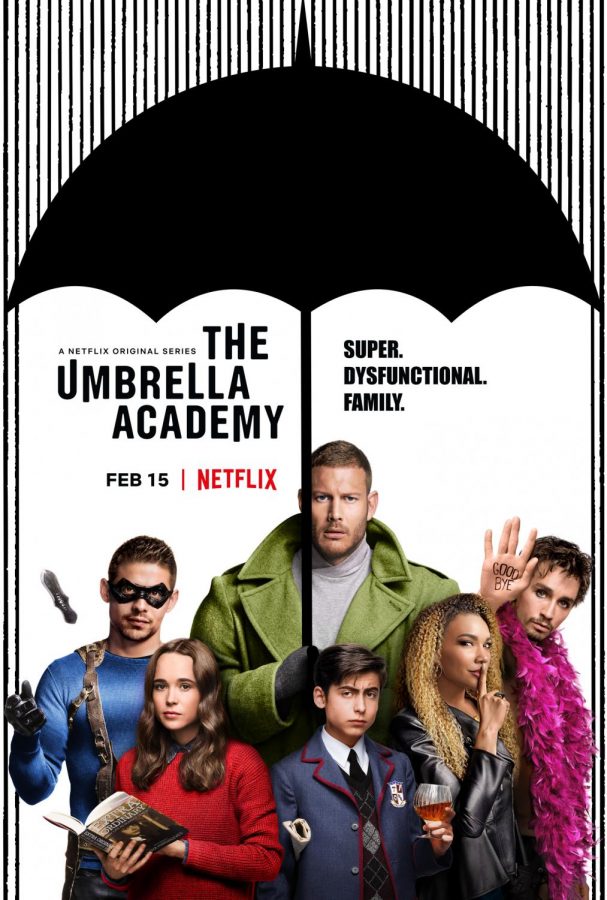 The Umbrella Academy portrays superheroes as not so super

Superheroes with addictions and daddy issues? Of course, this sounds crazy when compared to the superheroes we know and love. But what if they were not the proud symbols that people made them out to be? Could they still inspire hope even if they are too preoccupied with their own chaotic lives? Prepare to be in awe as an alternate universe is discovered where superheroes hide in plain sight but don’t exactly focus on the good of the people.

The Umbrella Academy is a brand new Netflix Original Series based off of the American comic series written by Gerard Way. With its premiere on Feb 15, this series shows the dedication and creativity of Netflix to produce something more unique to the public eye. As people’s interests tend to revolve around people becoming heroes of their own stories, The Umbrella Academy plans to satisfy their viewers with a different take on your average hero.

This story takes the audience through a whirlwind of events as it begins with a man named Sir Reginald Hargreeves, played by Colm Feore, adopting seven randomly selected babies. At the time, it was discovered that a strange phenomenon occurred where several women from all over the world gave birth on the same day, although none of them were pregnant.

However, this was an intriguing piece of information for Sir Reginald Hargreeves. And since he was overflowing with money, he decided to take a few of those babies, (as some of the mothers were willing to do so). Already becoming very peculiar, the audience starts to wonder as the show does a great job of paving the way for these children’s stories by giving off a sense of oddity.

Up until this point, it feels like the audience will be bored with another imitation of superhero characters. Still, the future of these children is something to not lose interest in as there seems to be much more specific content than what meets the eye. In all honesty, questions are asked as to what is to be expected from another wannabe superhero story. And with that, if the audience is willing to look deeper, so begins the creation of the Umbrella Academy for the seven soon-to-be “superheroes.”

The main focus is on these seven special children. But the question is: Why are they so special? Clearly with so much attention on their existence, it’s pretty clear that they probably have superpowers. Sir Reginald Hargreeves had an intuition that they had something like that within them, and he planned to test his theory and possibly train them.

Then, The Umbrella Academy immediately fast forwards to the present day, where all of the children have grown up to be somewhat successful in their own way. Their names are Luther, Diego, Allison, Klaus, and Vanya, played by Tom Hopper, David Castañeda, Emmy Raver-Lampman, Robert Sheehan, and Ellen Page respectively. However, the last two are not revealed just yet, which amps up the curiosity.

The five that are known to us thus far can be described as exciting yet average at the same time. Diego fights crime as a detective but he is not an actual cop, which sounds quite abnormal. Allison is a famous actress with lots of connections, but has trouble with her own family. Vanya tries to improve her violin career, although luck doesn’t seem to be on her side.

On the other hand, Klaus wastes his life away with drugs and parties; he’s definitely the comedic relief. And with Luther, he lives his “normal” life on the moon, which was probably one of the most shocking moments for the audience as they watches everyone’s story take place.

Their lives head in different directions, with each one fighting to survive their strange lives, but the lingering question still remains: What is to be known of their past?

To answer the question, the storyline switches to when they were all children again in the hands of Sir Reginald Hargreeves, which ends up being a little bit of a messy transition, but gets the job done in order to add the necessary background.

Right away, it’s obvious that the Umbrella Academy had a military-like home. The children were numbered off 1-7 and experienced what it was like to be a famous group of child superheroes who fought crime and were admired by others, except Vanya who is actually revealed to have a special power later in the season. But this was nonexistent at home where they had a non emotional father who trained them to develop their own powers and never accepted mistakes.

Still, they all began to form their chaotic family. Although some aspects were out of the ordinary, including an ape butler and a robot mother, they had each other’s backs through thick and thin, despite a rough childhood with not much love.

From here, the story cuts back to the present day, and the audience now knows how these children came to be. The other two children, Number Five and Ben, played by Aidan Gallagher and Justin H. Min, are nowhere to be found, but that is something for the audience to watch out for.

They don’t know it yet, but the remaining five will soon team up, like all superheroes do, to fight against evil one last time. With another cliche already forming, they have to do absolutely crazy things to save the world from an unexpected villain.

Full of surprising turns, The Umbrella Academy is one for the books. Although it does have the tendency of being confusing with the switch between past and present, it eventually comes together to create a cohesive story of different elements.

From shoot-to-kill agents to drug raves, “crazy” is definitely an understatement for this show. Netflix has really outdone themselves since cheesy superhero shows are way out of season. Watching episode to episode in this first season is sure to make audiences wonder with amazement and be slightly uncomfortable from time to time. So, when it comes to those unexpected shows that people learn to love through time, The Umbrella Academy doesn’t disappoint.