What to believe about Justice Kavanaugh? 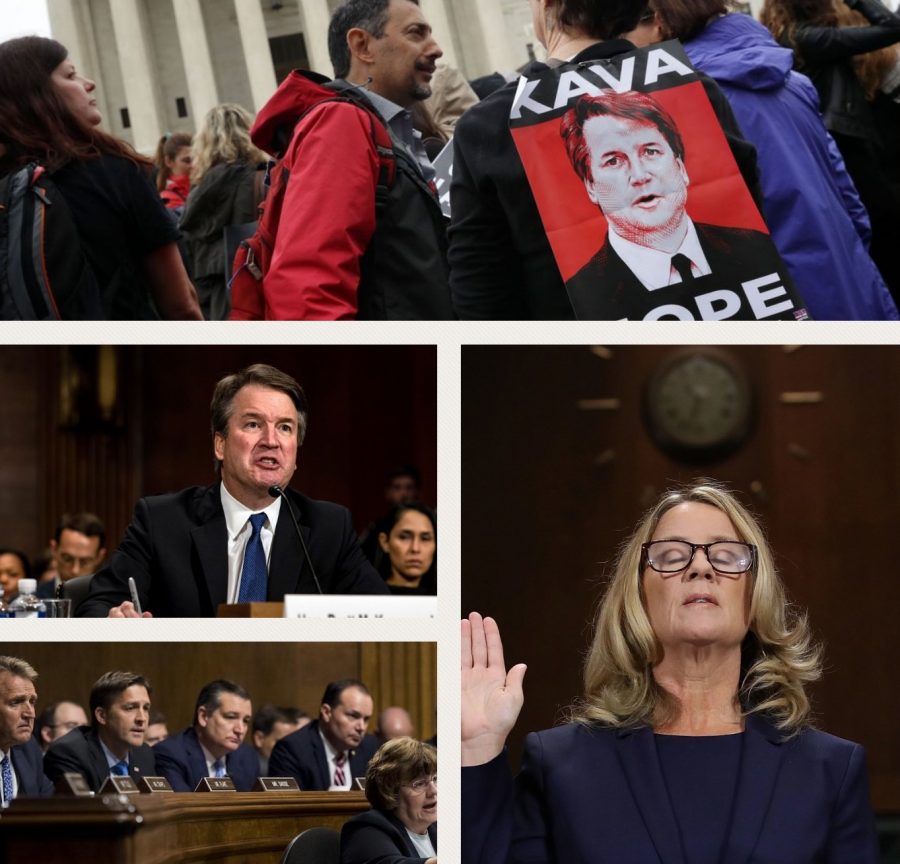 From top to bottom: Protestors outside the Capitol building voice their disdain; then-Judge Kavanaugh speaks during his hearing; Christine Blasey Ford is sworn in during her hearing; US senators listen during the Senate hearing.

The past few weeks have marked some very hard times for the US Senate, as so many events have unfolded during the confirmation hearings for Brett Kavanaugh’s Supreme Court candidacy. Specifically, the most controversial and significant development has been the sexual assault allegations levied against Kavanaugh by Dr. Christine Blasey Ford, a professor that went to the same high school as him more than 30 years ago. Supposedly, Kavanaugh assaulted Ford at a high school party in the early 1980’s.

There are multiple questions to answer in this scenario. How valid are these claims since they are dated so far in the past? Should these allegations prevent Kavanaugh from a spot on the bench? Whose word do we believe? And was the timing of these allegations a partisan move and political strategy?

Society has changed drastically even just in the past two years. Multiple men of high status and position have been exposed of sexually assaulting women as of late. Certainly we wouldn’t want somebody with these kind of crimes behind them on the Supreme Court bench because then we would be contributing to the overall problem. Both Kavanaugh and Ford testified on Sep 27 to Congress, and the general consensus afterwards from the American public and Congress alike was that they didn’t know what to believe.

Senator Jeff Flake, a Republican from Arizona, called for an FBI investigation the day the Senate Judiciary Committee voted to move on with Kavanaugh’s nomination 11-10. This delayed the vote by a week as the FBI interviewed nine people who possibly had recollections of the incident. This investigation was definitely needed, as there is much uncertainty about who did what. Ford’s testimony was compelling and emotional, but was filled with a lot of “I don’t remembers”.

The investigation’s results turned out to be not much different than what senators and the general public already knew. Many argue that Kavanaugh’s confirmation sets a despicable precedent for the women who desire to speak up about their sexual assault experiences. At the same time, Kavanaugh shouldn’t be punished for merely having allegations levied against him, especially if the evidence is pointing to him being innocent.

However, another aspect of the hearings that casts doubt over Kavanaugh’s fitness to be a Supreme Court justice, is his behavior during his own testimony. Yes, surely most of us would intensely defend ourselves given an untrue allegation about our character. But Kavanaugh’s testimony was considered inappropriate by many viewers. He painted a picture of himself as a raging alcoholic in his high school years, and asked a senator whose father died of alcoholism if she’d ever passed out drunk. His conduct was not one that we should expect as a nation from a justice on the highest court of the land.

Trump’s administration could have easily chosen one of the other multiple conservative candidates on his list. Even Republican senators such as Susan Collins, Republican from Maine who was a deciding vote for his confirmation, admitted he should have stepped down after the testimony he gave.

There were a lot of missteps by a lot of people as well as a lot of voices contributing to this confirmation. Both parties carried out shameful tactics. The Republicans belittled Ford’s accusations, with President Trump even horribly mocking her at a rally in Mississippi. The Democrats kept putting off the vote as a political tactic, and waited for the right opportunity to disclose to the public Ford’s letter to Senator Dianne Feinstein, instead of mentioning it earlier. Ultimately, in the wake of a 51-49 vote in favor of Kavanaugh’s confirmation, there are still two fairly distinct opinions.

Either we can disagree with his appointment due to his temperament and the allegations, or we can accept his appointment due to the lack of corroborating evidence in the FBI investigation and the principle of “innocent until proven guilty”. Either way, we will now see Kavanaugh take the Supreme Court bench with a gloomy, charcoal gray cloud looming over America’s political system as the public looks on.