In spite of rain, Ryan’s Race persists with a smile 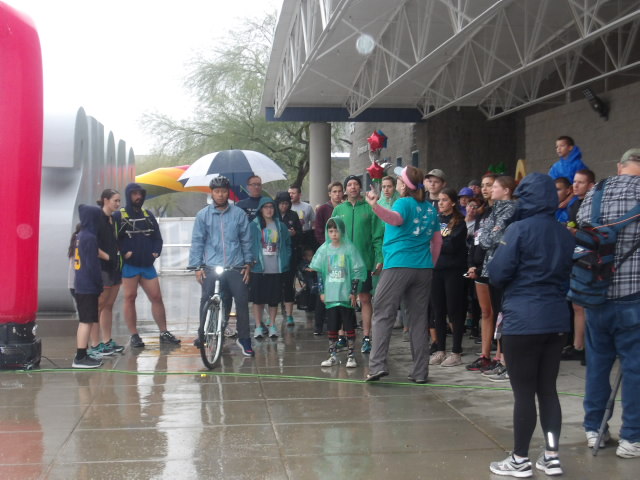 Racers stand at the start line, gearing up to begin their race in the rain.

What comes to mind when envisioning a cloudy day full of pouring rain? On television, rainy days typically make the setting for a rotten, sorrowful, and wretched event. In some cases, rain can destroy a bright, sunny, lively day. However, on Saturday, Feb 22, the rain had the exact opposite effect.

Feb 22 marked the fifth annual Ryan’s Race. Former student at OHS, Ryan Edwards, passed away five years ago, and  in an effort to prevent and inform the community about depression and suicide, Edward’s parents created Ryan’s Race.

“Our purpose is to raise funds for mental health awareness and suicide prevention,” said Dana Edwards, Ryan’s father. “That’s a pretty serious subject, but we think it is important to talk about it and make it okay. The event is a really positive environment and very supportive.”

Ryan’s Race is a huge event, full of various activities for everyone. The biggest part of Ryan’s Race is the race itself. With a one mile, 5k, and a 10k race, the event welcomes all levels of runners. Seeing as running isn’t a universally loved activity, Ryan’s Race also features numerous other events, including pictures with Comicare Superheroes, a yoga class, a pound fitness class, a lollipop race, and so much more.

The event garnered some 190 people. This is tremendous growth compared to the last few years.

Ryan’s Race is the epitome of a community event. It was created for the people around OHS, and has grown because of community support.

The support from the community came not only from people who signed up, but also local companies. Mascots from Chick-fil-A and Texas Roadhouse were at the event, helping encourage runners and hype the crowd. Spiderman, Iron Man, and Black Panther from Comicare Superheroes were also there, awarding high-fives and taking pictures with participants.

“I thought the superheroes were really cool. They went around to everybody giving high-fives. Everybody was smiling and laughing. That part was really cool,” said Dante Milo, sophomore.

Ryan’s Race took place on OHS soil. The courses wrapped around the school, and the other events took place in the gymnasium. OHS’ band supported the event by playing the national anthem and pep tunes.

“Ryan was a member of the band several years ago. The band teacher told us about his story and the whole event. I had to be there to play pep tunes, which was an honor,” Ngo said.

A substantial amount of OHS students attended the event. Some were there to run, but the majority of students volunteered. OHS softball, National Honor Society students, and numerous others helped out with the event.

“I was there volunteering with some of my friends. I needed hours for NHS, and this was the perfect opportunity,” Watson said. “It was fun, I genuinely enjoyed it. The rain definitely made it harder to organize the race, but everybody had a really good attitude about it.”

Ryan’s story shows how important it is to pay attention to other people. It can be difficult, being a student, because oftentimes, students don’t know how to handle something like that. However, it is easy to speak up, encourage each other, and find someone that does know what to do.

“The event made me realize that we need to care for each other more, and check up on one another, and make sure no one is hurting. Everyone was positive in thinking how we can improve from here on out, and encourage each other more, and not just act like everything is fine,” Milo said.

Ryan’s family has turned sorrowing circumstances into an inspiring event.

“I think it is really heartwarming because they turned Ryan’s circumstances into something that could help other people. Instead of having his memory of just Ryan, they made a race for him, something to remember him by,” Ngo said. “The legacy left behind is helping out other people who are in a similar situation.”

As word spreads about Ryan’s Race, more and more people are being inspired to speak up and aid those around them who are struggling. The race is a great way to speak to people who have had similar experiences and struggle with depression. The community and the people involved in the race are influential, good-natured, and tender-hearted. It is a fantastic event that continues to change lives.

“I’m definitely going to do it next year. It was really fun, and everybody was so nice. I really enjoyed it. This year I did it to get hours for NHS, but next year I am going to volunteer because I really had fun,” Watson said.