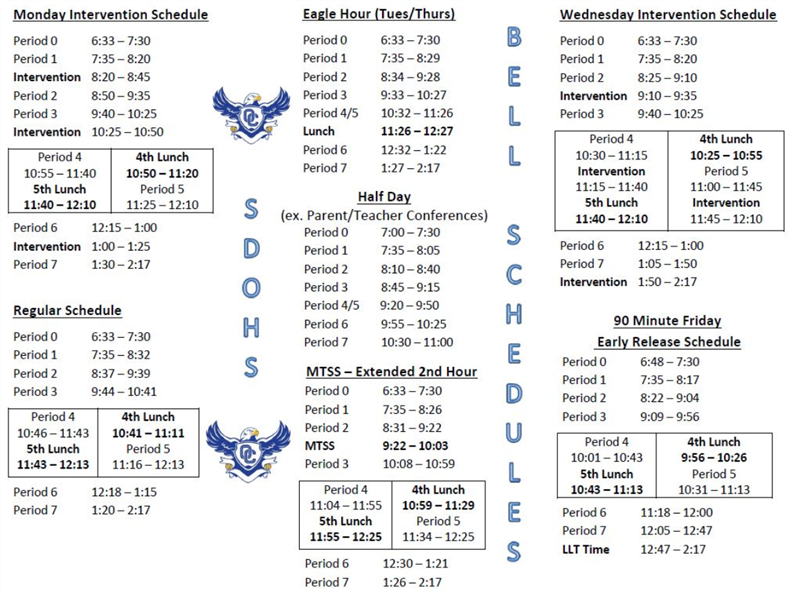 Over the last few years, changes have been made to the school schedule in hopes to improve the academic performance of students. In addition to Eagle Hour, which has been implemented for the past two years, a new intervention schedule will be put in place this year to add to students’ resources.

Starting the week of Sep 9, every Monday and Wednesday will have its own intervention plan. On these days every other class period will have an extended 25 minutes of class time to get help with misunderstood material, time to make up tests or quizzes, and asking teachers questions about homework. On Mondays, only periods one, three, and six will have the extra intervention time. While on Wednesdays it’s periods two, four or five, and seven. Along with an improved schedule for Mondays and Wednesdays, new early release Fridays have been put in place, and Eagle Hour will also remain a part of the weekly schedule on Tuesdays and Thursdays.

For academic heavy students, kids with a greater amount of challenging classes, the new intervention schedule could prove to be helpful with maintaining a thorough understanding of the class material.

“I think it’s better. I think it’s modified a little bit more, suited around student’s needs. Especially now that I’m a junior with a lot of AP classes coming in, it’s kind of necessary for us just because of all that new material. Compared to years past, I think it’s a huge jump for us with the different schedules, provides a lot more opportunity for students,” said Max Lyons, junior.

While some students see this change as a positive addition to their school experience, others do not have as optimistic of an opinion. Nicole Hoffman, senior, is one student who starts school second hour, adding more complications to her schedule in particular.

“I didn’t like it because, having to remember to get to school at different times everyday and all the different times and classes I thought it would be hard. But I’ll probably get used to it,” Hoffman said.

In addition to the Eagle Hour days, the new intervention schedule has been put in place to help students’ academic performance and provide extra time for them to ask questions to better understand the material learned in class.

“We realized that while Eagle Hour is effective and has really been helpful with students getting some of the help that they need, they weren’t getting the help they need in all of their classes. So we thought it was hard for students who were maybe not doing well in three or four classes, to go see that many teachers,” said Ray Utter, Dean of Students. “So we thought it would be beneficial to add in some extra time during the other days like Monday and Wednesday to give students more time to go get the help they needed in their specific classes.”

Also new, starting this year, approximately three Fridays out of every month will be an early release schedule where students get released from school at 12:47. Most students see this as a good way to end the week.

“I personally like it because it gives us a shorter snippet of time but it also allows enough time for teachers to still give the curriculum that they need to do. It also sets up the week for a quiz mentality that a lot of people do, that sums up the week because that shorter time allows for a quick quiz or a quick activity,” Lyons said.

Besides students going home early, there were other reasons behind this new schedule change. Specifically, teachers now utilize this extra time after school to work on improving their effectiveness in the classroom.

“The teachers get together and they look over data, whether it’s assessment data or whatever and they basically discuss how their classes are doing. If one teacher’s class isn’t doing as well as another teacher’s classes, then they can kind of figure out what’s working in one class, what’s not working in a different class for these kinds of students, and they actually come up with different ideas, plans and strategies to help out students differently,” Utter said.

Some of the brains behind the operation come from OHS’ very own history department. They, among other departments, help in brainstorming different ideas to improve the schedule so that it could benefit both student and teacher needs.

“Multiple schedules were proposed for this. And so certain people in my department got together and brainstormed what they thought would be the best option. Realizing, many people would just prefer with the written schedule the way it was, if we were going to do this, then we wanted to put forth the best possible way to do this. And so there was just some brainstorming that went on and this was something that came out of that,” said Rick Weyker, POS 110 and Economics Teacher.

With having a different schedule almost everyday, things are bound to get complicated. Hopefully, with time, students and teachers alike will be able to adjust to these new changes.

“I think it will be confusing at first. I mean there’s no way it’s not going to be confusing. I’m trying to do everything I can to make it as easy of a transition as possible. But I’m realistic, I know it’s not going to go over well which is why I came up with all of these different ways of presenting the bells to everyone… [But] It’s like anything else there’s always some growing pains at first but once we get used to it I think it’ll just become commonplace,” Utter said.

Ultimately, the goal behind these new changes are meant to be beneficial in the long run despite the irritation it causes presently.

“I think the most important thing to always remember is that everything that we’re doing here is built around the idea that we’re trying to help students learn better and that there’s no argument that public education always needs to be trying new things to help students learn, especially in modern economy,” Weyker said. “And so, while I totally understand the focus and frustrations with this, I think it’s worth the effort just to see if this even helps just a few kids learn the material better.”