Large student population forces staff to get creative with their space 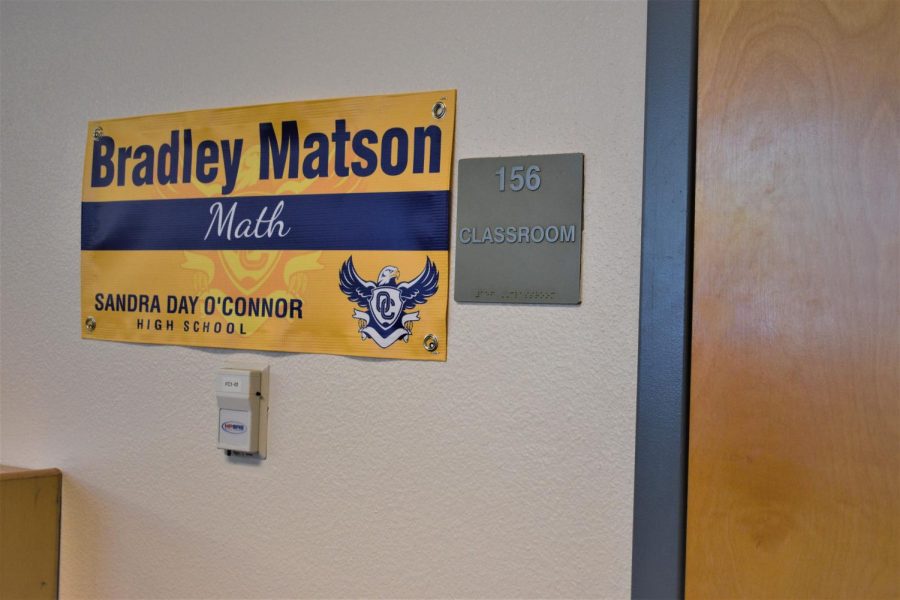 The entrance to Matson's room in the library.

Nearly 2700 students roam the halls of OHS this year, filling the campus to the brim and requiring more staff members than ever to teach the massive amount of teens. As a measure to help the campus operate at maximum capacity, a system of “traveling teachers,”’ or teachers without a permanent classroom, has been put into place. Along with this, some teachers have moved into the rooms attached to the Library/Media Center. With these changes, OHS is able to accommodate for its thousands of students.

Though there are currently more students in attendance than in previous years, the concept of traveling teachers is not new to OHS. Every few years or so, the school has to take select staff members and move them around in order to make up for the lack of classrooms.

“There are four or five [traveling teachers] and it’s usually about that many,” said Kim Parker, English teacher. “It’s what we have to do, so we make the best of it.”

Parker has never been a displaced teacher before, so she “can’t be as efficient as [she] used to be.” She believes that this is because she does not have a place of her own to teach.

“[Travelling teachers] don’t really have a home, so I can’t go into [my classroom] where all of my stuff is because a teacher is teaching a class,” Parker said. “I guess it’s my classroom for the moment, but I never feel like it’s my classroom. I always feel like I’m a guest because I didn’t set it up and I don’t want to disturb other people’s stuff. You just never feel like you’re settled or that you have a place to be.”

Another way of keeping up with the number of students on campus was to move teachers to the Library/Media Center, away from the rest of the campus. Brad Matson, math teacher, was moved to one of these rooms and has had mixed feelings about it so far.

“People in the math department that somewhat know me will say that I have a tendency to be hiding out in my room alone anyway, so I thought it would be great to be able to hide out and be alone,” Matson said. “But, even me, with all my feelings about being alone, I feel really alone over here. I very rarely see my fellow math teachers, and I hate to say it, but I do miss them.”

While being separated from the rest of the teachers has been a challenge, there have also been some benefits. The new rooms are equipped with more advanced technology and have more space than the other classrooms on campus, making the move easier for teachers like Matson.

“When they showed me the room, I knew that this was going to be a very big and spacious room, and that was exciting,” Matson said. “I do enjoy being over here. From the time we had our first summer meeting, a lot of the teachers thought I was lucky because I got this big room and this fancy Apple TV. A lot of people are envious of my room now.”

Although some of the changes that have been made on campus have had some adverse effects on the staff, the changes helped to bring more students to OHS. These accommodations made by the staff help to ensure that every student can receive the best education possible.