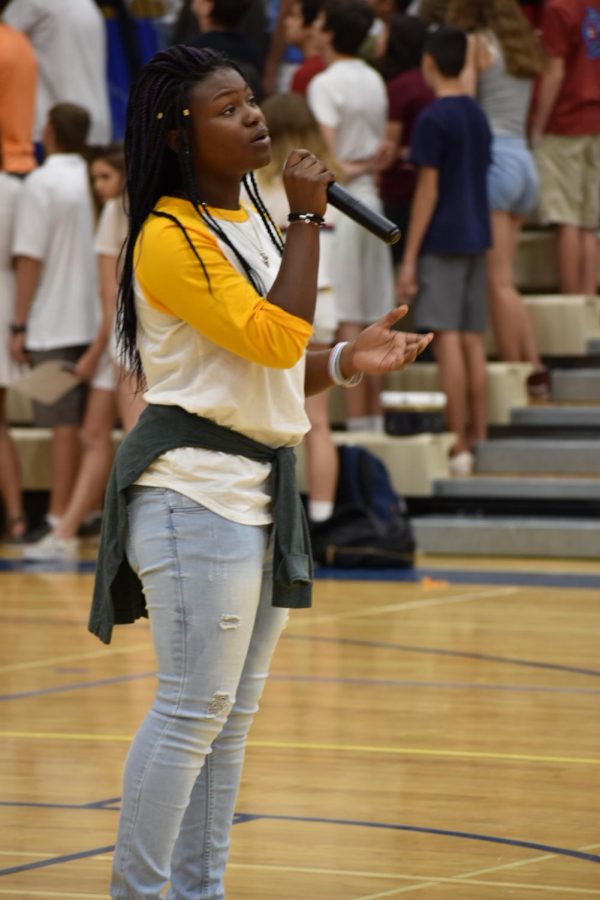 Every year, Stugo puts on a homecoming assembly, a time when many sports, clubs, teachers, and even students get recognized around the campus. Among the celebrations are performances from the various art departments around the school.

This year, some might have noticed that two performance arts that usually make an appearance were missing: choir and band.

Typically in these assemblies, choir sings the national anthem at the beginning of the event and band comes out and performs some songs from their set. This year, Stugo decided to cut and replace these two events with elements from them, having a single honor choir girl sing the National Anthem and only drum line performing.

Many students that participate in band and choir voiced concern over their absence in the assembly.

“A lot of us were upset because this is what we were looking forward to,” said Jamie Bond, junior and member of the honor choir. “It was the only way that we could represent choir and get noticed throughout the assembly so that people would think that choir is actually great.”

At one point, choir students were on Twitter talking about the issue, and asked Stugo what was going on. Eventually, the news spread to Stugo kids and they responded saying that they needed to reduce time. Bond was upset because “that didn’t make sense because someone was still singing it” and that made tensions even higher than they previously were.

In reality, part of the issue was scheduling, but the reason why the full honor choir wasn’t present at the assembly was because Stugo wanted to try something new.

“All that happened was that Stugo wanted to change up the assembly and be different,” said Baylor Gibbs, senior and president of Stugo. “It wasn’t anything about leaving choir and band out at all; we just wanted something new.”

Though band and choir were the ones that got the attention for being reduced, many of the other aspects of the assembly had to be shortened as well.

“We didn’t just have to cut performing arts out,” Gibbs said. “Even sports didn’t walk out on the floor. They just got a video and stood up.”

Concerning band, three days before the assembly, students in band were notified that only the drumline would be performing. Many band students were upset because they were not expecting to get taken out of the assembly for what they believed was no reason. Kaelen Wilber, junior, with some help from Lauren Kisicki, junior, went as far as making a petition to get the performing arts back into the assembly.

“There was never any malicious intent towards Stugo [with the petition],” said Kisicki. “We did not mean to attack them. We just wanted our voices to be heard.”

Maddie Oleson, senior and current drum major in the band, made sure to communicate with Stugo to make the situation more clear for everyone.

Many were upset because they feel as if the assembly is their only time to show the school what they’ve been working so hard on.

“We came to an understanding as a band that a lot of the reason why this was so important to us was because it’s like our only time to perform for the student body,” Kisicki said. “People were definitely upset because there’s a really strong emotional attachment to that performance.”

Although many people were vocal about being upset, people seem to agree that Stugo wasn’t intentionally attacking the arts; instead it was a communication issue.

“I think that the problem was the lack of communication; the discussion wasn’t there,” said Gabby Ilunga-Kabamba, sophomore, honor choir member, and the person who sang that national anthem at the assembly. “We probably should’ve all sat down and talked about it just to clear the air, because the way it was done kind of made it seem like choir was thrown out.”

According to Marc Mur, advisor for Stugo, the change had been planned months in advance, and due to scheduling issues, some things had to be cut. Mr. Mur believes that all of the anger could have been avoided with better communication.

“We’re trying to be very inclusive, and the way this was handled created the issue,” Mur said. “We want to accommodate everyone as much as possible.”

“People got really mad, and I totally understand that,” Gibbs said. “It’s just really unfortunate, the circumstances we were given, but I just want people to know that it wasn’t any vicious attack against band or choir.”