Students show their support through charity 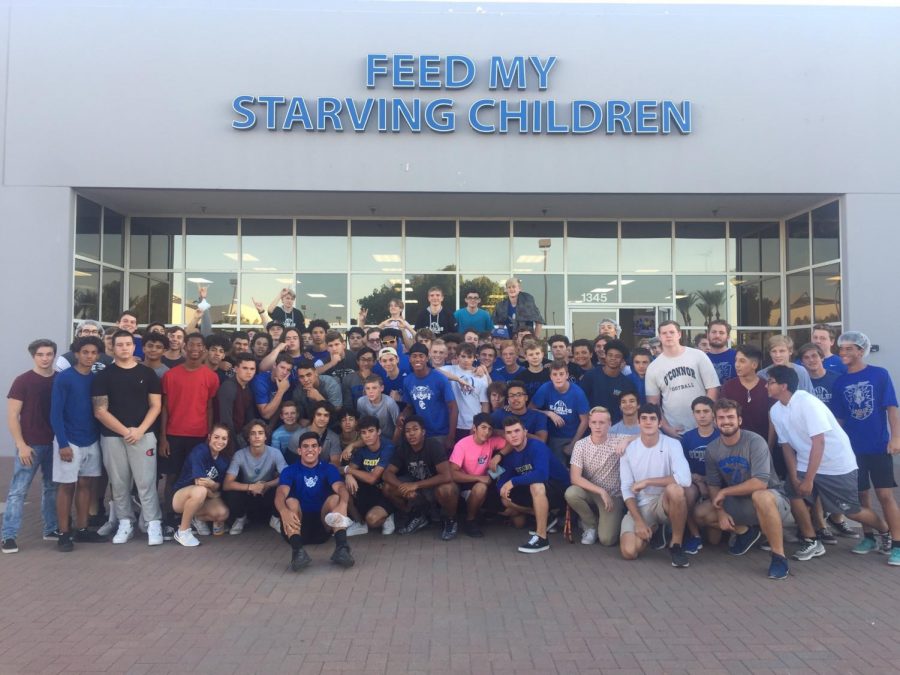 OHS Football and spiritline teams help out those in need through Feed My Starving Children packing programs.

OHS is blessed to be a community where helping others is encouraged. There are groups all around campus specifically created to help out the people around them, like the Interact club and even the Freshman Mentors. This year, there has been a surge of charity happening on campus involving many students, from the sophomore English charity projects and the football teams volunteering.

“We’re talking about being selfless,” said Steve Casey, coach of the varsity team. “It’s one of the things we try to teach our kids about. Serving others. I think that’s the lasting effect that this has in just anything we do.”

Recently, both the football team and the spirit line have volunteered at the organization Feed my Starving Children and participated in CCV’s Excelling Stars, a program where kids with special needs can play the sports they love.

“My favorite part is watching their faces once they realize the impact that they have on those kids,” Casey said. “Watching their interactions with [each other] and knowing that at the end of the day, they helped someone they might never even meet, like with Feed My Starving Children, and the fact that it does touch them.”

This is not the first time the team has done charity work like this. For the past few years, Casey has been orchestrating the addition of charity into his kids’ lives, volunteering at many different places throughout the years.

“I hope this gives them a perspective about how football is a game that’s going to end for you, so it’s about what you do with your life and how you serve others and how you feel about yourself,” Casey said. “I think it gives them a perspective on what life’s really about. It’s really not about that football game and there are other things in life that will bring you joy and prosperity.”

The athletes involved also felt as though helping others has positively impacted them.

“It made me feel better and made my day better,” said Piper Linneer, a junior on spiritline. “It made me happy that I was helping someone. Now, someone has food because we got together and helped.”

As a team, they were able to seriously impact many people’s lives. Through Feed my Starving Children, the teams were able to see the benefits of the time they had spent helping others.

“At the end, we got to see how many bags of food we ended up making for all the kids,” Linneer said. “It showed you how many people get fed for a year from all the food we packed. The guy that ran the event said that the program actually helped him get food. He got better and ended up coming and joining the program to help other kids get food.”

Although a huge impact had been made on other people, there were also some good things that came about in the team itself.

“It’s impacted the team because we’re a lot less stressed, because it’s a team bonding thing,” said Ben Fuenmayor, a senior on the varsity football team. “It’s good help your community. As a football team, it’s nice to get away from football. Just being able to not focus on it and make a difference in other people’s lives and do something outside of football was really cool.”

The football team isn’t the only group doing good for their community. Along with the charity work the football team has been doing, English Honors sophomores have been tackling a huge charity project all year.

Introduced this year, teachers in the Honors English program have made an assignment for their sophomores to research a charity, somehow help out their organization, and make a documentary video about how their experience was.

This project was inspired by the story of Malala Yousafzai and how she advocates and brings change in her community at such a young age.

“We’re trying to show that one person can make a difference like Malala did,” said Rhonda Cunningham, an English teacher. “Ours isn’t as big of a deal, but I think that they’re finding that there’s things that they can do locally to help make a difference. A lot of times, people just don’t realize that there are little things that they can do, and I wanted [the students] to see that.”

The students have been working on this project since the beginning of this school year. The projects are due on Oct. 31, so many charity activities have already been completed.

“So far, my favorite part has been when they go to do that community service project, they are so excited about it,” Cunningham said. “It makes it super fun when kids can come in a say ‘we made $250!’ Watching them get excited about it is what’s been really fun, because they’re getting it.”

There were all kinds of charities that the students were able to reach. Joey Tse, sophomore, and her group volunteered with After the Home Stretch, an organization that helps to rehabilitate and rehome horses in the valley.

“My favorite part about the whole experience was going out of my comfort zone and meeting new people, and doing something that I never thought I would do,” Tse said. “[Volunteering] something that I’ve never considered to be apart of my life, now is something I might go back and do again.”

Another group got the chance to help out the Foster Home Foundation and go see a baseball game with foster kids.

“My favorite part was probably just seeing the kids,” said Isabel Ramirez, sophomore. “There were huge groups of kids and they all just had the biggest smiles on their faces. They were all screaming when they scored, and it’s cool to see them be able to do that.”

Ramirez enjoyed being able to help out children in need and bring some light into their lives, and believes that it is an experience everyone should have.

“A lot of kids that go to this school live in an area that’s really privileged,” Ramirez said.  “Seeing different foundations that are doing something for those who are in need, it’s opens their eyes.”

Overall, the project has helped many kids see the world around them in a different light, showing them that they can make a difference in their world.

“I thought the whole experience was very good,” Tse said. “Since we are doing a project based on Malala’s story, and how someone our age had such a big impact, I feel like it’s really good for us to get out and try to do things more often rather than seeing this as just an assignment.”