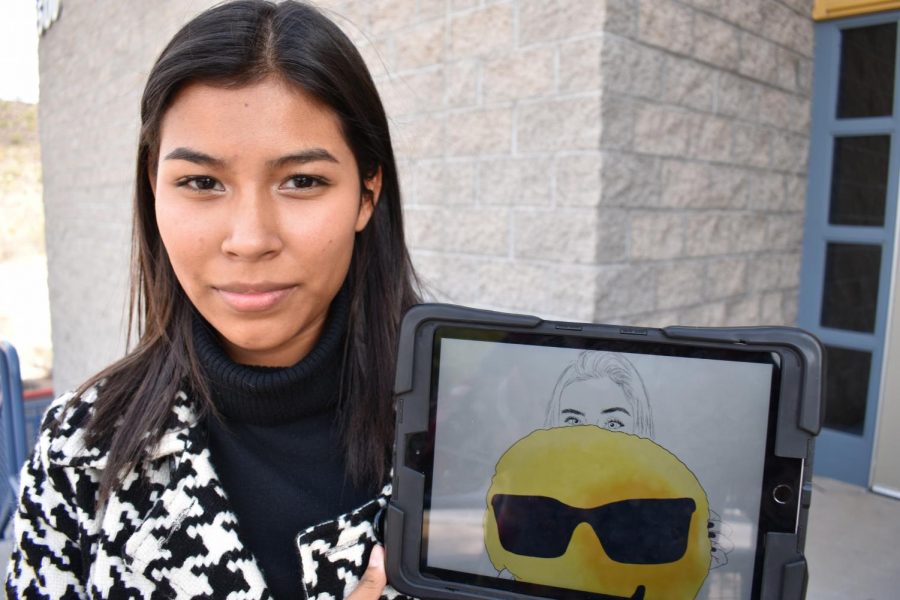 Mia Hernandez, freshman, displays her art which she creates on her personal iPad.

Service clubs on campus are constantly pushing their students to come up with ways to help the community by doing the heavy lifting kind of tasks. Mia Hernandez, freshman, is finding a new way to help and that’s through the power of art.

Hernandez is beginning a program to raise money for Guatemalan orphans on her website thecartwheeler.com. She is doing this to give back to her home after she was adopted from Guatemala. Money is raised through the sale of Hernandez’s art.

“I do digital art. That’s what I started out doing because when I was younger I was really into art and so my parents approached me with the idea of starting a non-profit organization where I sell my art and then I use the money and donate it to an orphanage in Guatemala,” Hernandez said.

Casa Guatemala is the organization the cARTwheeler is donating to. Hernandez focuses her art pieces on portraits of people.

“I was 11 months old when I was adopted and at the time my parents lived in Indiana. So they would send me stuff from where they lived and I thought that was really cool,” Hernandez said.

Hernandez wants to send back to Guatemala like her parents sent assistance to her. The cARTwheeler currently is fundraising money only, but it is going through the lengthy process of registering as a non-profit.

“Digital is stuff that’s [already] done like drawings and paintings of people that are famous so anyone can have those, but then custom I have it set up so someone can put their name and what they want,” Hernandez said.

Canvas art is similar to digital in content, but is done with paint. She wants the cARTwheeler to be a long term project.

“I really want it to be something I can do a lot because it’s something I really like doing. I love drawing, but the fact that I’m able to give back to something that is really personal that I care about is really cool to me,” Hernandez said.

The artist also said she would love to connect it to campus possibly with the art class.

When it comes to drawing pieces her work can be based on many different parts of her life.

“Most the time it’s stuff like my friends telling me ‘hey can you do a drawing of me’ and I’ll do that or I recently did a bunch of sketches of people from “Stranger Things” because that’s something I’m really into. I know I’m doing another one right now of Pennywise because that was “IT” and that was a big deal,” Hernandez said.

Finishing a piece takes dedication. Luckily she is able to space out the digital drawings, but canvas work has to be all done at that time. This adds on to the need for a photo because it would be difficult to have someone sit for such a long period of time.

“For digital drawing it’ll probably take me like 3-6 hours. It takes quite a bit of time, but paintings and stuff that can take up to a day,” Hernandez said.

The process is multilayered for the creation of art on the cARTwheeler.

“Usually it starts out with a sketch and then I always if I’m drawing a picture of someone start out with their skin tone and then I add on to the highlight of their face and the contour of it. Well, it’s kind of interesting because it’s like doing someone’s makeup,” Hernandez said.

Surprisingly, the art that is the basis of the cARTwheeler only began this year.

“I liked to draw a lot as a kid, but I started doing digital art only back in February. But I feel like it’s changed a lot since then,” Hernandez said.

She is honing her skills everyday by drawing and she only needs a few tools to get her work done.

“I have a green pen that I think I got at like TJMAXX at one point or something but that’s usually what I use or I use my fingers. Mostly I just draw on my iPad.”

She does all of her work with a mere $5 dollar app.

The non-profit is called the cARTwheeler because she said it contains the word art and “it’s kind of a joke.”

Mia Hernandez and her non-profit organization are elevating the campus to give back to others and Hernandez wants students to realize they can too.

“I think other students should do stuff for it. It’s something that I feel like is kind of simple in a way. So if they can help out then they should,” Hernandez said.