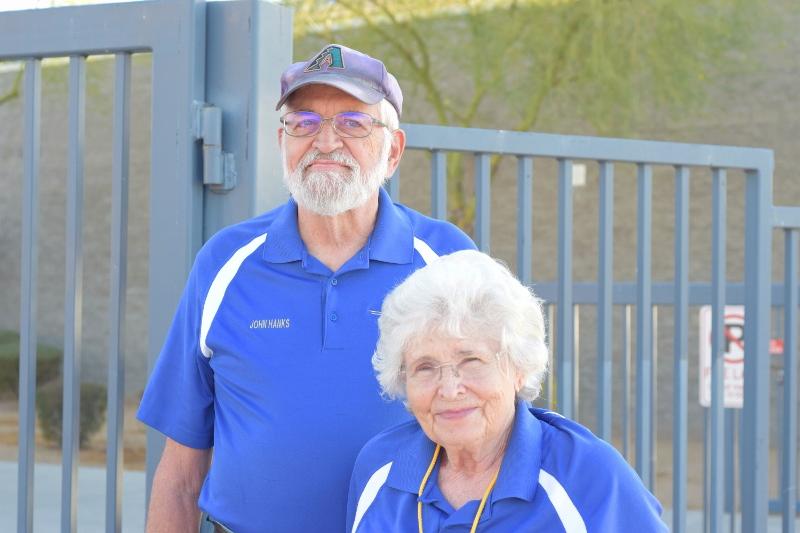 John and Wilma Hanks pose for a picture as they greet students coming in from the student parking lot.

John and Wilma Hanks are the smiling couple that greets students coming in from the student parking lot every Tuesday morning. They have been greeting students since 2009 through their church, CCV.

“At the time Bryan Jacobs was the Vice Principal, we talked to the school district about having greeters. We had 20 seniors at the beginning, since then some have passed away and others are incapable of coming out here anymore.” John explained.

When the senior greeters first started coming out in 2009, they were seen all over campus, not just in a few places.

“The first year people didn’t know how to take us, they weren’t as friendly. But in the years’ time they realized we were going to be here every Tuesday.” Wilma said.

John and Wilma love seeing the different types of students that walk past them in the morning.

“You get some that have their headphones in and their eyes down and they walk past like you’re not even here.” John said, “And others are very cheerful. You get a variety of characters, different ones and different actions. And some you get to recognize that you see for a while.”

John and Wilma have even gotten to know many students along the years, and are sad to see them graduate.

“2 years ago one of the girls started hugging us and it was so sweet. She did it for 2 years. After she graduated another girl started greeting us.” Wilma said.

Many students love seeing them in the morning as it shows that people care enough to come out and tell them good morning. They love seeing the couple come out every Tuesday.

“Seeing them in the morning definitely brightens my day,” said Chloe Lopez, senior, “It makes me happy that their days are being brightened as well when they greet us in the morning.”

When asked to give some advice to the students, Wilma answered, “When you look back on high school you’ll realize that it is a good time.” She explained. “I think the hardest time for people that age is when you graduate and go out to work or college, I think that’s a big step.”

John and Wilma can act like grandparents to some students and love doing so.

The campus loves having John and Wilma greet students in the mornings just as much as they love being there.