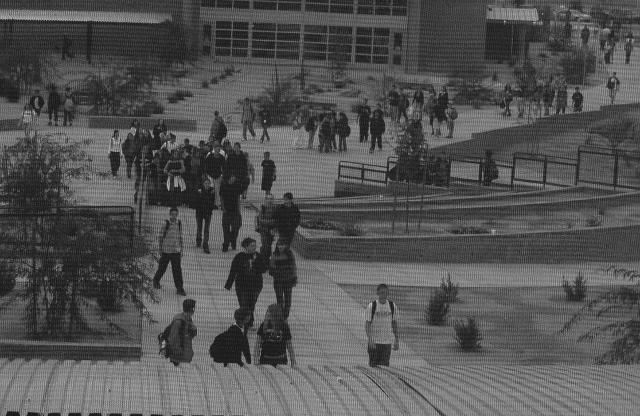 The first class of students to walk the OHS campus enjoy a cloudy morning.

“Tbt” has undoubtedly been infesting your social media feed for many months now. Nostalgia and fond memories of the past are difficult not to get swept up in.

While most students have known nothing other than OHS for the duration of their high school lives, several staff members remember when the school was opening it’s doors for the first time.

“The first year it seemed like there was a fight or two every week,” Baumgartner said. “And the cafeteria and the 400-500 building were the only buildings that were done.”

Cindy Knoll, math teacher, came to OHS in the second year it was open and remembers a similar situation.

“For some reason the kids were kind of crazy,” Knoll said. The first sophomore class had the option to stay at their old school or come to OHS, which is what Knoll attributes to the first graduating class being so rambunctious.

“I think that the students that came here were probably students who didn’t fit in at the schools they had gone to their freshman year, so I think they were kind of like lost souls,” Knoll said. “We were kind of glad when that first graduatingclass graduated because things sort of calmed down after that.”

While the students at OHS may have started out a little crazy, Rosa Leptich, conduct secretary, remembers the beauty of the campus when it opened.

“I thought it was just beautiful and massive,” Leptich said. “The setting with the mountains and everything I just thought was very, very pretty.”

Like Knoll, Ronda Cunningham, language arts teacher, came in OHS’ second year but thinks back to a much smaller community.

“There weren’t as many teachers as there are now, so it was a lot smaller, but everybody was very helpful,” Cunningham said.

Leptich similarly recounts a tight knit staff when OHS was getting off the ground.

“It was like a family type feel because it was so small and intimate,” Leptich said. “We still have the family feel, but the intimacy has definitely broadened since.”

Melanie Britton, band teacher, has been at OHS since it began as well and has witnessed the fine arts program expand from the ground up.

“I always wanted to start a program from scratch and create all of my own traditions,” Britton said. “You have to go through every little detail and then you know it gets done right.”

Britton accomplished her goals, from designing the band uniforms to composing the official OHS fight song.

While Britton was thrilled with the idea of starting the band program at OHS, she and several other staff members loved working for the first principal, Jack Dillard.

“He was a really good man and I liked his philosophy on how a school should be run,” Britton said. “I liked the concept of having somebody in charge who valued our personal time.”

Many staff members appreciated Dillard’s work, including Leptich, which is why she came to OHS initially.

“When he received the position here as principal I just followed him over,” Leptich said.

Although Cunningham had never taught high school before, she had confidence going to OHS, partly because of Dillard’s leadership.

“At our my very first staff meeting, he introduced all the new people without a list,” Cunningham said. She was very impressed that he knew everyone before the year had even begun and felt that OHS would be a cool environment for her.

This year’s seniors will be the eleventh class to graduate from OHS, meaning that years of memories fill the halls. Baumgartner has one that stands out in his mind.

“The first time when Sandra Day O’Connor came on campus and kind of blessed the campus so to speak,” Baumgartner said. “I think that was a big moment for our school.”

“This was such a great group of kids to experience what it was like to win,” Britton said. “I pretty much almost passed out.”

Looking back on her years at OHS thus far, Knoll has a very personal connection to her favorite memory.

“My son was a sophomore, and the very last full day of school, there was a huge food fight in the cafeteria,” Knoll said. “As soon as the fight was over, he loved this pink shirt that he wore, so he came running in and he was so mad that he got a stain on his pink shirt.”

Regardless of difficulties or struggles at OHS, Cunningham always remembers one thing about the school.

“I think that a lot of times, teenagers get a bad rap, and they shouldn’t,” Cunningham said. “I think that the kids here are wonderful.”