It: Chapter 2 floats along with mixed reviews 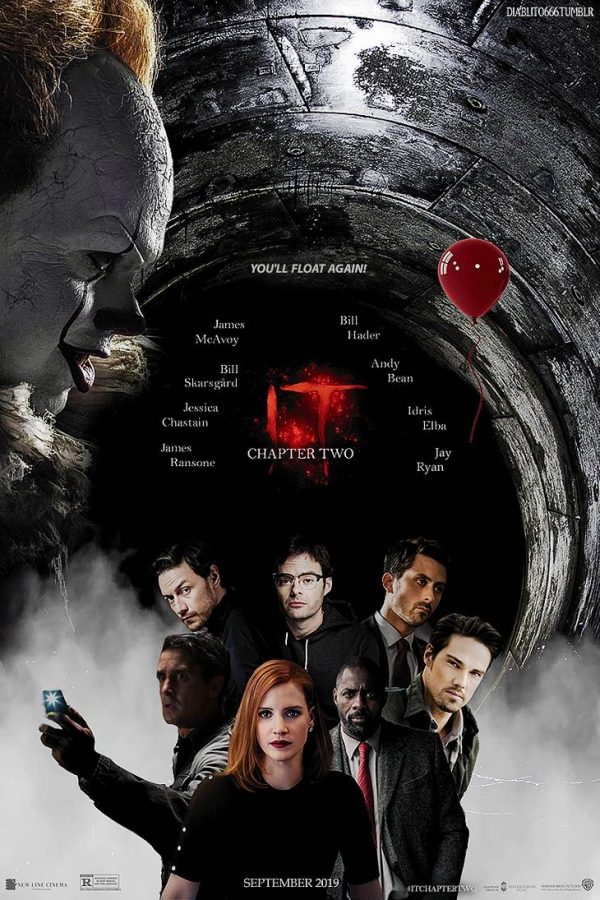 Photo courtesy of deviantart.com. A fan-made promotional poster for It: Chapter 2.

In the small town of Derry, Maine, sinister things are lurking about once again. Many will recall the 2017 horror hit, “It”, and the haunting story of seven preteens facing a demonic clown whose powers go way beyond smashing pies into faces and making balloon animals. Based off the iconic Stephen King novel, the second and final part of this saga, “It: Chapter 2”, was released to theaters on Sept 6, 2019. Though its reception might not be as overwhelmingly positive as its predecessor, “It: Chapter 2” delivers an entertaining end to the compelling story of the young Derry natives and their encounters with the supernatural.

“It: Chapter 2” takes place in 2016, exactly 27 years after the events of the original movie. The main cast of kids, self-named the Losers Club, have grown up and away from Derry, leading normal lives apart from each other. When Mike, one of the original Losers, notices strange activities occurring again in the small Maine town, he calls his friends to action to defeat the demonic Pennywise once and for all.

Jessica Chastain, James McAvoy, Bill Hader, James Ransone, Isaiah Mustafa, Jay Ryan, Andy Bean, and Bill Skarsgard play the parts of Bev, Bill, Richie, Eddie, Mike, Ben, Stan, and Pennywise the Dancing Clown. These actors were tasked with bringing these eight well loved characters back to the screen. Apart from Skarsgard, who reprises his role as the ancient poltergeist, these adult actors had to find the balance between playing their characters faithfully while also making sure they matured as normal people do over nearly 30 years. This difficult task was executed brilliantly through exceptional screenwriting and amazing performances from the actors involved.

One important thing to remember about “It: Chapter 2” is that it is not a sequel; it is a continuation of the original story. The Stephen King novel told this entire story in one massive book, making it so that the events from the first half are directly related to everything that occurs in the second half. This means that the original cast of kids, including Sophia Lillis, Jaeden Martell, Finn Wolfhard, Jack Dylan Grazer, Chosen Jacobs, Jeremy Ray Taylor, and Wyatt Oleff, play integral parts in this movie.

The casting of the adults in this movie is arguably one of its greatest assets. Each adult not only looks eerily similar to their teenaged counterparts, the mannerisms that distinguished each child in the first movie is captured so flawlessly that it almost seems like each character is played by the same actor digitally aged by a couple decades. What made the first movie so appealing was the chemistry between the central group and the authentic take on what life was like as a child witnessing horrors beyond their worst nightmares. Even though in the story, the characters haven’t seen or thought about each other in decades, the second they are together, they click in a way few casts do.

One particular standout from this movie was the character Richie, played by Bill Hader. In the original movie, Richie was a comedic character who managed to be crude yet completely lovable at the same time. Finn Wolfhard’s boyish charm translated perfectly into Hader’s sarcastic, yet endearing, adult version. Out of all the Losers, Richie’s character stayed most true to the original, providing much of the movie’s comedic moments that can almost make the audience forget about the gruesome horror happening every other scene. That being said, Hader’s portrayal of Richie brought a level of authenticity and depth to a character that was previously shown to simply be a comedic relief. What was once an immature young boy can now be seen as a man with a lot of troubles that are hidden behind layers of comedy, thanks to both the development of the character and Hader’s acting and comedic prowess. Hader’s performance as the unlikely hero makes the audience cry tears of happiness and sorrow, a feat that many other actors in the horror genre can only hope to achieve.

What “It: Chapter 2” has in character, it lacks in story and scares. With a runtime nearing three hours, you would think that the storyline would be more complex than getting scared the same way by the same villain while having flashbacks to a movie the audience has presumably already seen. The entire first hour of this movie utilizes the same set up/pay off routine repeatedly, to the point where the movie really isn’t even that scary. Having one character go off alone in search of childhood memories and then inevitably encounter Pennywise in some way shape or form is bound to get predictable. Not to mention, the entire character of Pennywise is basically copied and pasted from the first movie. While that may make sense in the context of the story, it doesn’t provide much room for shocking thrills and scares.  Whatever shock value the clown had in the original film is lost due to writing that didn’t give the movie a chance to explore new avenues of horror.

While the general consensus among critics and audiences alike seems to be that the movie didn’t quite live up to the standards set by the first chapter, “It: Chapter 2” still manages to be a highly entertaining horror flick with just enough story to fill in the gaps between massive character development. The “It” series itself seems to stand out from other horror films as stories rather than a long compilation of jump scares, thanks to some obviously brilliant source material. It may not be the scariest movie out there, but this film brings more to the table than just a spooky clown; it sends a message about the power of friendship and what you can do together is far greater than what you can accomplish alone.