Mobile Games usher in a new era of gaming 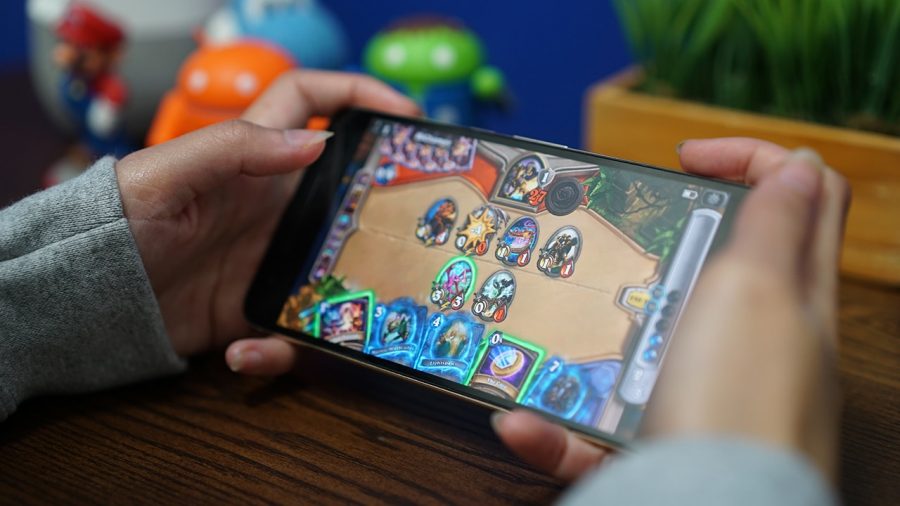 Heartstone, the game pictured above, was a very popular mobile game with its mobile version released in 2014.

Video games have made many evolutions throughout the years from what kinds of devices they are played on. Starting back on the arcade boxes to computer power houses, the way people play has changed drastically.

The newest addition to the family is in the palm of your hands. Recently big companies have started to look into the market of making big brand games for your phone.

Mobile games started out as simple and mindless tasks that would repeat forever. For example, Flappy Bird was one of the first most buzzed about mobile games. The world was captivated by this game even though all you did was tap a screen to make the bird go through mazes of pipes.

The creator of Flappy Bird, Dong Nguyen, started making $50,000 a day from the game alone. Even though this game was a major success, Nguyen shut the game down for personal reasons thus single handedly ending this era of mobile games.

After this, companies and indie startups were all racing to make the next big mobile title. They started releasing games in the simple style that was “popular” at the time, but no one was hitting it big.

Developers started to realize that the repetitive games they made were all the same and the masses got tired and bored of something they have played millions of times before.

Studios knew they had to change, but didn’t want to put effort on a full blown story because that type of story was more for games on actual consoles, like Red Dead Redemption or Halo. They decided to make it so that there would be levels to keep the gameplay fresh and customization to make the player want to be the most powerful they can be.

The perfect example of a company that adopted this was a developer named Glu. They made games like Gun Bros., Contract Killer, and Guts and Glory where they challenged the old style of games very well.

Every game had the basics of story like “two brothers fighting aliens”, “you’re a sniper shoot the target”, “you’re a gladiator rise to the top”, etc. But that was backed up by 3D worlds not just a 2D plane like Flappy Bird, and you could customize not only your character but their equipment as well.

Finally things you did in the game actually mattered and you could get better by buying new equipment for your character to do more damage with a better sword or take less damage from enemies by buying that gold armor you have been saving up for.

The buying part of these games is where ideas of profit comes to mind. The creators of these games would make a “pay to win” system. You could pay real world currency and get high powered gear for doing nothing but putting in those sweet credit card numbers.

This caused a tremendous increase in profits for mobile games, making other companies jump on this new train making most games “pay to win”. This did not sell well with people, especially with games like Clash Royale where you could just pay to get the best cards and you would dominate other players like it’s nothing.

This caused casual players to stop playing these games because they did not want to waste money or put immense amounts of time into the game. This left the players who had extra cash lying around and the hardcore fan base that didn’t mind grinding days into the game.

Games like this have evolved and dominated in the past four years by releasing sequels with improved graphics and new items to keep the masses interested. People were getting less and less interested with mobile games, but the big companies like SuperCell didn’t care because the people who stayed had endlessly spent money on these games whenever something new came out.

Now we arrive at present day, where companies are questioning the industry once again. China has been known to be the powerhouse in the mobile games industry for a long time. A lot of the revenue these games make are from China, which makes sense considering the massive population.

A mobile port of the Final Fantasy games was released in China, and it made even more tremendous amounts of money than ever before. Everyone was shocked because it was a game the likes of the ones on consoles and gaming computers. It had a story along with all the flashy add ons of a mobile game.

Instantly simple games like Player Unknowns Battlegrounds and Fortnite released mobile versions of their games. They made so much money even though those games had little to no story at all. This showed that games that were meant for consoles could do just as well, if not better, on the mobile platform.

Bigger names like EA, Bethesda, and Blizzard started making games from their established brands like Command and Conquer, Skyrim, and Diablo, into stand alone mobile games.

This solved some issues and caused more problems. When games started putting micro transactions in their games, people were outraged because they already had to deal with this same problem in their normal games, but now if they played the mobile versions it would be severely worse to deal with.

Another outrage from players was that their beloved game franchises next installment was going to be some flimsy mobile game instead of a fully fledged game on console or PC. This happened specifically with Diablo Immortal, the upcoming Diablo mobile game. Fans were very upset that instead of getting a sequel to a game that’s been on hold they are getting a cash grab mobile game, but it’s not all problems.

Some of the solutions of the new mobile games are that a wide variety of new players can now start to enjoy the games they have been missing out on because they can’t play them on console or PC, whether it be because they can’t afford it or it’s not available in their country.

This will also help bring casual players back because they can just relax and play games that used to be only at home, but are now on the go and playable anywhere.

Overall, the history of mobile games is a long and untold story that is filled with games that are meant to help keep you occupied and not bored when you’re on the go.