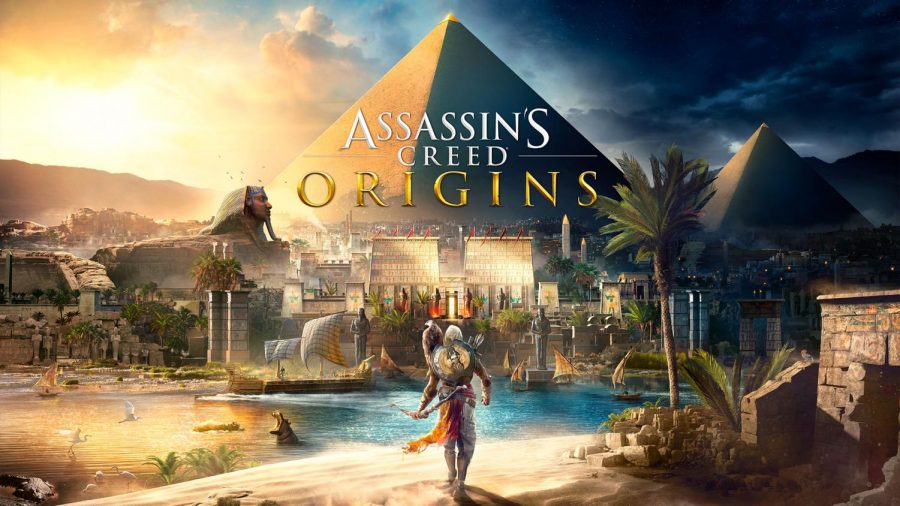 DISCLAIMER: Assassin’s Creed: Origins is rated M for Mature. You must be 17 years or older, or have the permission of a guardian to play it. The Talon does NOT encourage underage students to obtain the game without permission.

Secret societies, mystical ancient artifacts, and exploring unknown lands- what more could you want in a video game? Luckily, the new “Assassin’s Creed” has all of that.

“Assassin’s Creed” has been an ongoing video game series since their debut in 2007 with a video game with the same namesake. Since then, the franchise has released 15 games in total, but only nine of them follow the main storyline while the others are additional side stories.

The whole series primarily follows the rivalry between two ancient secret societies, the Assassins and the Knights Templar, and their quests to attain certain ancient artifacts that hold unknown amounts of power. Rather than being entirely submerged into the time period from which the games are mostly set in, the games add a twist in that the ancient settings and environments the player is venturing around are actually more so memories of the protagonist’s ancestors that are achieved through a virtual simulation.

The real-world setting of the plot is actually in present-day and revolves around Abstergo Industries, the modern-day adaptation of the Knights Templar, and their secret device that allows its user to experience the memories of their ancestors. With this device, named the “Animus”, Abstergo basically kidnap people who are suspected descendants of those who have come across or even interacted with the relics they are searching for.

“Origins” serves as the series’ prequel and analyzes a bit more deeply the origins, hence the game’s title, of the centuries-long conflict between the Assassins and the Templar Order, though the antagonist order in this game specifically is the precursor of the Templar Order.

Since the franchise spans a decade, comparing “Origins” to its forerunners show major improvements.

Compared to the first game the franchise has ever released, the graphics for “Origins” are definitely more detailed and provide a more clear, focused landscape for which the game is set in. The animation for the scenery is also more open and less suffocating, compared to the more urban settings the previous games leaned towards.

With the more open space “Origins” is set in, it feels more loose and seems more appropriate for the assassin-protagonist concept, considering an assassin’s need for subtlety and low number of witnesses to the crime.

Of course at the time of its debut, the graphics for “Assassin’s Creed” were advanced and the concept of the plot that the franchise revolves around, mainly the stealth adventure prospect of it, was fairly new to audiences.

Gameplay has also improved immensely from previous games, mostly on combat. Combat in “Origins” is more of a free-for-all, with whatever weapon the player is holding hitting anything in its range allowing for more variations in combat outcomes, which is a step up from the predetermined animations and calculated combat movements the other games provided.

In addition to the combat improvements, arena fights separate from the narrative of the storyline were introduced and the opportunity for the player to simply explore the world of the game without the need to check off objectives or engage in combat has been announced for a future update for the game itself.

“Origins” has, so far, been received as one of the best games in the franchise and the game itself proved to be worthy of those reactions. Though most of the gameplay is undoubtedly the same as it was for the past eight games, the switch to a more open, both space-wise and culture wise, was a refreshing idea in itself.

This recent installment of the “Assassin’s Creed” games kept many of the same aspects that popularized “Assassin’s Creed”, down to the smallest technological bugs, and then built on those foundations and upped their graphics and interactivity. It was a great addition to the, seemingly, still ongoing series and is definitely a beautiful mystic adventure game to immerse yourself into.