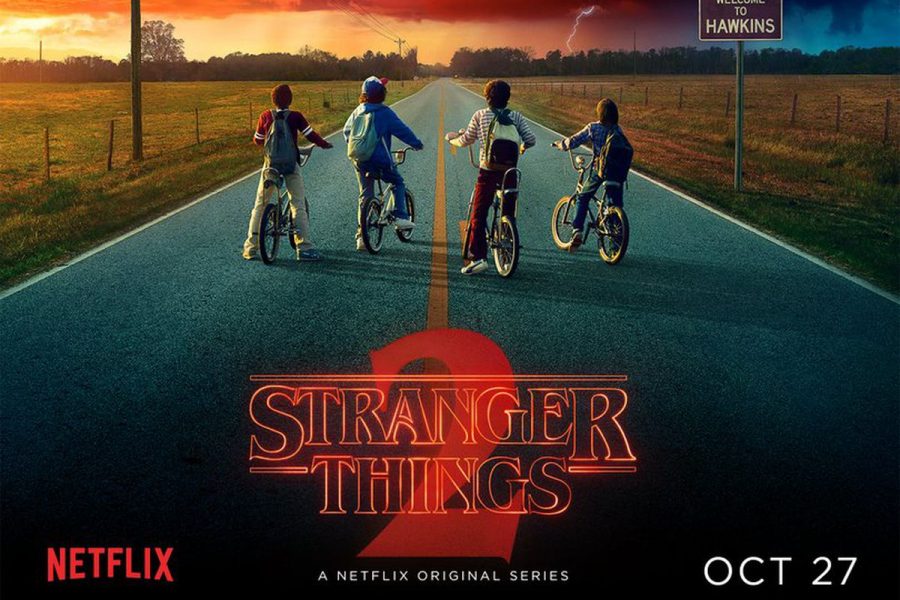 This review contains spoilers from season 2 of Stranger Things. Heed with caution.

The first season of Stranger Things was a smash hit. It was an amazing take on the sci-fi genre adding 80s flair and a coming of age story. And the second season unequivocally lived up to the hype.

The season starts out with the re-introduction of all of the well known characters having fun and living normal lives. Along with that, new characters are introduced, Bob Newby played by Sean Astin, Max Mayfeild and Billy Hargrove, played by Sadie Sink and Dacre Montgomery, respectively. being the major three. But it isn’t too sweet for long: it’s soon discovered that Will has what seems like Post-traumatic stress disorder from his time in the upside down, crops are randomly dying, and Eleven, played by Millie Bobby Brown, has been living with Chief Jim Hopper, played by David Harbour, but she is not allowed to leave or see Mike Wheeler, portrayed by Finn Wolfhard, ever.

The season also starts with robbery and car chase that ends when a girl with the numbers 008 tattooed on her wrist makes the police see the bridge collapsing when there is nothing at all. Leading with this scene and revealing the tattoo extremely similar to Eleven’s 011 tattoo, alludes to the possibility that there might be more children, 10 more to be exact, just like Eleven.

The girl is not mentioned or even seen again until episode 7 when Eleven goes on a small journey of self discovery that leads her to her mother, and then the girl with the 008 tattoo is revealed to be Kali, portrayed by Linnea Berthelsen, a girl who was tortured just as Eleven was and can make others see what she wants them to see. This episode seemed like an afterthought. The pacing of the main story was put on halt for this, and as a result it seemed very out of place.

However, as far as this idea is concerned, if done right, this could be a fantastic part of the next season. If given less exposition and more of what stranger things does best, creates an emotional connection between Kali and the audience, they will knock it out of the park yet again.

This whole season was done and acted out so beautifully. Not a single character was cast wrong for this show. The relationships between characters on this show seem so natural and are so well acted you will love to love them or live to hate them. And it’s impossible to say that without mentioning the two most heart wrenching scenes in the whole season.

The reconnection of Mike and Eleven was full of pain, sorrow, loss, happiness and love. You could see every one of those emotions going across both of the actor’s faces. It was an extremely beautiful but painful moment, and was acted out so well it would be hard to distinguish it from the real thing.

The scene just following, of Mike and Chief Hopper, hurts in a much different way. Mike blames hopper for keeping Eleven hidden and screams at him, wails on him, screaming saying everything is his fault, until he is so overcome with emotion he collapses into his arms and sobs. Rarely you ever get to see this much emotion displayed between two male characters and it was extremely refreshing to see.

These raw kind of drama filled moments compared to the lightness of other moments of the show are part of what make this show so special.

Overall, this was a fantastic sequel to the original season and it was gut wrenching and hard to look away, in all the right ways. The third season is one year away from release, so start counting down now.