Movie Maketh me snooze: Kingsman: The golden Circle leaves a lot to be desired 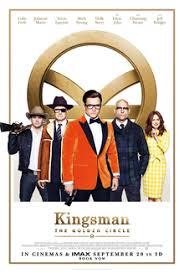 “Kingsman: the Secret Service” was an energetic and surprisingly clever movie that had fun with the tropes of the spy genre while also poking fun at its ridiculous clichés. Its sequel, The Golden Circle, has about half of what made the first one so memorable, leaving audiences with an overall forgettable experience.

“Kingsman: The Golden Circle” starts shortly after the first one where Eggsy (Taron Egerton) is a seasoned member of the Kingsman, an underground British spy organization where each of its members represents one of the knights of the round table. A new villain, Poppy (Julianne Moore) and her drug organization, The Golden Circle, cause groundbreaking trouble for the Kingsman forcing them to join forces with their American counterpart, the Statesman, and bring down this organization who might just have a scheme that could end millions of lives.

It’s not a wholly original plot, but for this franchise that’s ok, so long as it finds clever ways to subvert spy tropes while also striking a fine balance with fun, ridiculous action scenes. This is The Golden Circle’s biggest problem, as it doesn’t really do anything new or clever for this franchise or genre and instead just goes straight for ridiculousness.

This doesn’t tank the movie or make it unwatchable by any means, as there’s plenty of fun to be had with its action set pieces and banter between characters, however one should come to expect a little more being the first one actually had some brains in its script.

This is seen most with the antagonists of the two films, as in the first one Valentine (Samuel L. Jackson) was an evil mastermind that showed no remorse for brutally killing millions of people, but was also a pacifist with a squeaky lisping voice who hated the sight of blood. Making the villain a cowardly pacifist was a brilliant way to satirize typical spy movie villains who are too cartoony in how bloodthirsty they can be, and the juxtaposition of these different traits made for some hilarious scenes.

And what about Poppy in the latest movie? She’s evil. She’s eccentric. She’s obsessed with the fifties. She turns humans into cheeseburgers. Cool, so what? Is there really anything more to her character other than that she’s weird and goofy? Moore has a lot of fun and gives a memorable performance, but there’s really nothing clever about her character, she’s just a goofy villain.

While there is fun to be had particularly in the first and last acts, the middle act of this movie is just dull. Harry (Colin Firth) from the first film returns and they handle his character in the most frustratingly uninspired plot line ever regarding his memories and spend too much time on that. Meanwhile Eggsy and a member of the Statesman, Whiskey (Pedro Pascal), take a detour to go to a music festival to find an asset to the Golden Circle.

Too much time is spent at this festival when what they did with the asset could’ve taken two seconds realistically. This sequence culminates with a gag regarding the asset’s private parts, which will surely be talked about for a while, and then the movie moves on.

The action sequences are entertaining in their ridiculousness much like the first film. The way music is used adds a ton of flavor, however much like everything else in the film it just pales in comparison to the first one. Nothing really stands out like the church scene or climax of the first one, it’s all entertaining but nothing new.

Entertaining but nothing new is basically the crux of this movie, it’s a shame the first one already did so much this movie does but ten times better. Had this been the first Kingsman film it probably would’ve felt a lot more fresh and innovative, but since the first film is in the back of my mind I can’t help but feel let down by this movie.

While it’s generally more silly than it is smart, it does have hints of the brains the first one had. This is primarily seen with Eggsy being in a committed relationship with the Swedish Princess (Hanna Alström) he met at the end of the first film. Being in the first film she came across as a throwaway girl much like James Bond would meet, it’s funny that Eggsy actually settled down with her and made a genuine relationship. Eggsy’s job conflicting with her is a very clever subversion of the womanizer trope that agents in the genre have. That’s about it though.

“Kingsman: The Golden Circle” is a fun time at the movies, just not a very memorable one. This is disappointing considering the quality of the first movie. Despite a boring and meandering second act, people can definitely have fun with The Golden Circle, just don’t go in expecting a truly inventive take on the genre.