Theatre prepares for The Giver 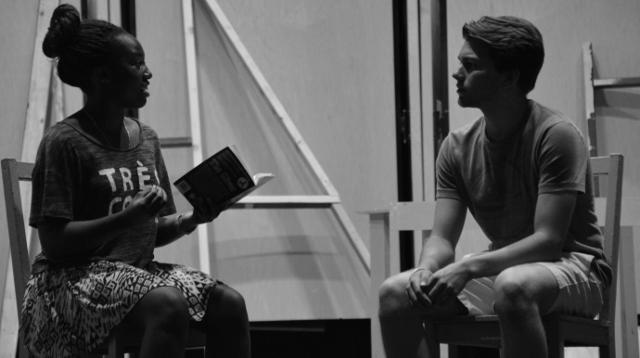 Jasmine Amoako- Agyei, junior, and Chris Ackerman, Junior, rehearsing for the The Giver.

The OHS theatre department will be performing the The Giver on November 12, 13 and 14.

Rehearsals have been happening Monday through Thursday, ending around 4:30. The first day of rehearsal consisted of reading over the scripts and practicing.

Learning the script before a show can be nerve racking, but according to Toni Fioramanti, theatre director, there are a few techniques to help an actor be prepared to play their part.

Fioramonti suggests that students use flashcards, repetition, lots of movements with your lines (actually acting it out).

“There are so many things that can go wrong in a show,” said Jessy Richards, senior.

Richards said that memorizing the lines is the hardest because you can’t actually use the techniques learned in theatre class until you know the lines.

However, for this particular play, Richards  is facing a different obstacle.

“For this show, what is really hard is the character analysis. The people [the characters] are bi-products with no emotion,” Richards said.

Kayla Guzek, senior, plays the mother in the play and the hardest part for her is playing the wife of her best friend.

“Seeing someone as your husband but he is your best friend, you just got to get into the mode of acting,” said Guzek.

Aside from the actors, the set and the costumes help bring the show to life.

“It kind of sets the tone for the show,” said Tori Niemiec, costume director.

As the costume director, the first task for Niemiec is to read the script and go through the characters to see what type of person they are.

“It is good to have a view of each character, you don’t want the costumes to blend,” Niemiec said.

For The Giver costumes, they are going for a futuristic uniform look.

“For this, it is more futuristic and that means I have to look sharper and clean cut,” Richards said.

Before the actors begin making the costumes, they check to see what pieces they have already.

“Sometimes we do borrow from Mountain Ridge because we are actually really good friends with them, at least their theatre department,” Niemiec said jokingly.

The designers also go to Joann’s fabric to get pieces to add to what they already have.

However, before they go out to shop for the supplies they need, the students have to get the store approved by the bookstore.

“If actors need to get anything for themselves, they go to Good Will because it is cheap,” Niemiec said.

Additionally, there is also a tech team who decide what kind of lighting will be used throughout the show.

“The Giver tends to be gray at the beginning and as the play progresses, we add more warm colors,” said Nick Ackerman, senior.

Any student can be a part of a theatre production, but they have to have previous experience before they begin.

“Anyone can try out but they need to earn their actor card,” Fioramanti said.