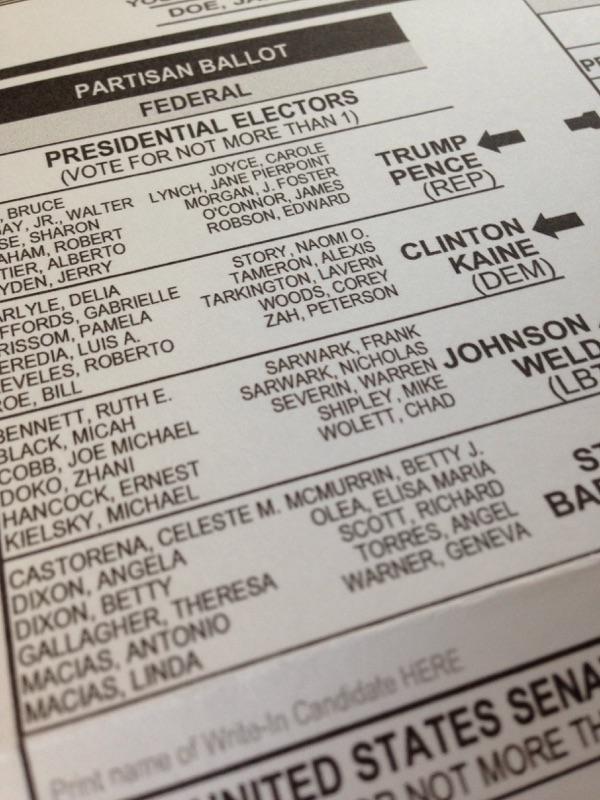 Early-voting ballot for this year's candidates (Courtesy of Ashlee Chanel)

Early-voting ballot for this year's candidates

Why Election day needs to be fixed

After over a year of campaigning for President of the United States, Donald Trump and Hillary Clinton look to one day to see who is the victor. The first Tuesday after the first Monday in November is America’s election day. But imagine this: before you have a chance to go and vote, the president is already chosen. How is this possible?

Citizens go to vote in their designated polling place where they cast their ballot. States that live off the east coast vote first. As the day goes on, polls open in states from east to west. For example, in Maine most polls open at 6 a.m. eastern time. In Arizona, polls open at 6:00 mountain standard time. But 6 a.m. in Maine is 4 a.m. in Arizona. Therefore, east coast states vote three hours before Arizona.

The problem with this? By the time western states vote, they could turn on the news and see “the next president.”

Who should be the next president of the United States?

The second problem is how the media determines the winner of each state. For a candidate to win the electoral votes of a state, they need to win 50% plus one vote. The electoral votes in 48 states are on a winner-take-all basis. But networks announce the winner when only a small fraction of the votes are actually counted.

They do this by exit polls. Reporters stand outside of polling places and ask citizens who they voted for. After they ask a certain amount (which is always a relatively small number) they announce to the country who the winner is.

This is a form of voter manipulation. A person can come home from work and go to vote, only to see that Hillary Clinton won their state. At that point, they wouldn’t bother voting if they were going to vote for Donald Trump, and vice versa. Therefore, if the news networks call the winner before all the votes are in, they are practically controlling who wins the state.

Not only that, but the wrong candidate could be announced. Reporters make the assumptions that exit polls are accurate, and they don’t question the sample size or the honesty of the people they are asking.

It happened in 1948 when Republican Thomas Dewey was announced the winner over Democrat Harry Truman, only for it to be a quick assumption. Once ballots were counted, Truman was the winner. It is commonly referred to as one of the greatest presidential upsets in history.

The third problem is the assumption that certain candidates will win certain states. Anyone in the media will say that Hillary Clinton will win California and New York because they are heavily liberal. They will also say that Donald Trump will win Kansas and Texas because they are heavily conservative. So if  someone is a conservative who lives in California are they  going to bother voting? Probably not. The same goes for a liberal who lives in Texas.

By making assumptions, voters are given the mindset that their vote doesn’t matter. This decreases turnout in the polling places and could potentially pick the next president.

The final problem occurring on election day is voter fraud. George Soros is a businessman who owns and manufactures voting machines in the United States. He is a liberal and has heavily supported the democratic party’s candidates in years past. And not only that, but Hillary’s daughter, Chelsea Clinton, is married to Soros’ nephew. Soros has been a long term friend of the Clintons.

There are accusations that Soros has rigged the machines. On other machines, new videos have been shared showing voters who vote for Trump and the machine registers as a click for Clinton. This could be a calibration issue, but it is occurring already in early voting nation wide.

If  the voter fraud not true, and George Soros did not “rig” the machines, why would the U.S. have to use his machines? Why couldn’t the government simply use machines from a non-partisan group, or at least spend more time making sure it is fair?

Another form of voter fraud was uncovered by Project Veritas, as they went undercover at a Democratic event. They talked to the NYC Democratic Election Commissioner, Alan, Schulkin who explained that “they bus people around to vote.” He went on to explain that they would bus a large amount of people and go from polling place to polling place, voting for democratic candidates.

Voter intimidation is part of this too. In 2008, it was recorded that members of the Black Panthers stood outside of polling places, intimidating voters and telling them to vote for Obama. 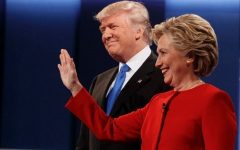 Students raise questions about the 2016 election

How do we fix these problems?

By having all states vote at the same time, regardless of time zone, it would make it fair for all people to have a chance to vote at once. By not allowing the media to predict winners of states until enough ballots are counted, it prevents an issue of calling the wrong candidate or being to quick to call the winner. And by not labeling one state as “solid Democrat” and another as “solid Republican” it would make everyone feel like their vote counts for something. And lastly, you elect the candidate who opposes government corruption.

As Americans, we all have a right to vote. It is something given to us by our founding fathers, and it is something most countries do not have the opportunity to do. However, we should make sure that the way elections play out are fair and balanced so that we may make the important decisions that will affect our lives.

*Changes to story: p.m. was listed rather than a.m.