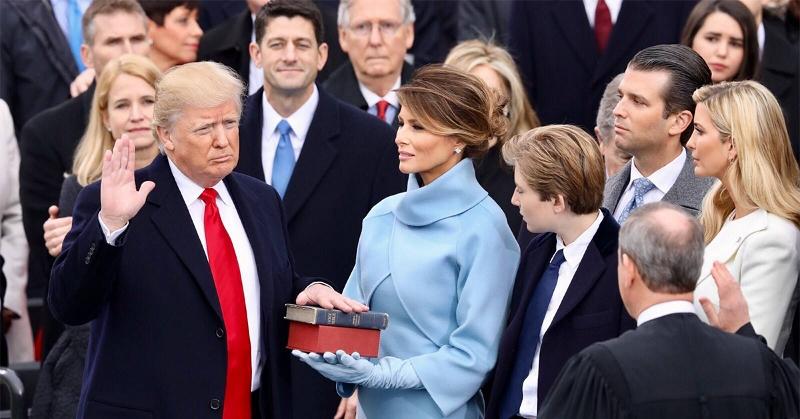 President Trump sworn in on Abraham Lincoln's bible and his own held by his wife, Melania Trump

In 1786, the Framers of the Constitution took to creating a new kind of document, one of democratic principles, that acted as a republic. This idea was revolutionary, as the existence of such a nation had not been but a thought. Some found the idea attractive, others opposed it. Today, it is the United States.

In these United States, Donald Trump has been sworn in as the 45th President. Over the past two years, he has ran a campaign for office that was arguably unconventional, and definitely drew attention to his message. His legitimacy as a candidate was inconceivable to some, and a bright future for others. And now he is President. President Donald Trump.

President Trump has drawn from democratic ideals that make his place of power seem like it will be the people’s, interestingly enough, the Framers drafted the Constitution in a way that prevents the people from holding power. The people are to be represented, but not in power, as James Madison outlines in Federalist Paper Number 10.

As Trump, in his inauguration speech, relied mostly on the idea that the people will once again be in power, it seems the people have taken his word for it. Realistically, there is still no way for the people to have any more power than they have now, as far as government goes.

The principles he believes in seemed to take effect in the hearts of the people soon after he stepped on the podium, although they were not necessarily “his” people. Protests broke out in the capital as the President Elect began to shed the second half of his title. The people took power in their situation. Later in the weekend, Women’s Marches across the country took place to initiate an era of progress in gender equality.

Early in President Trump’s speech he said, “Today, we are not merely transferring power from one administration to another, or from one party to another, but we are transferring power from Washington D.C., and giving it back to you, the people.” However politically unrealistic this is, it happened on a national level. If influence is  power, then the people took power.

“Together, we will determine the course of America, and the World, for many, many years to come,” Trump said. Think of it, groups of people who want to be heard on a national, political, and economic level, and a president who claims to want what the people want, and to give power to the people, the match seems natural.

Regardless of political opinion, it should be clear that the next four years will be very different from the last; transformative in the least, and surely trying.