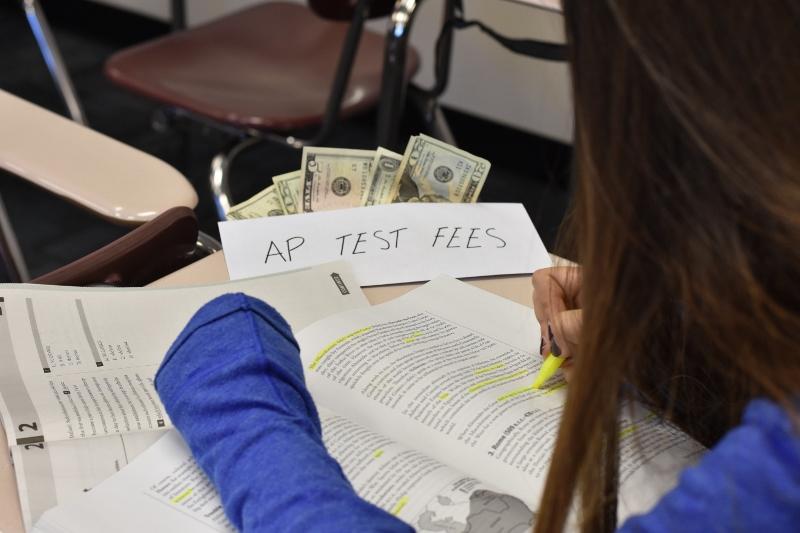 (Photo Illustration) A student studies the WHAP test preparation book, while the cost of the AP test rests nearby. (Emilie Reid)

(Photo Illustration) A student studies the WHAP test preparation book, while the cost of the AP test rests nearby.

AP grading system is not what it seems

Any AP student knows that the exam they take at the end of the year is the most stressful test of the class. However, the way these tests are graded is unknown to most people.

The tests are scored on a scale of 1 to 5, with a certain percentage marking each score. But how do they find the actual percentage for each grade?

After all the AP tests are read and graded, they are placed in one long list. The Chief Reader, along with statisticians, find a “break” in the list where each score would be. They look at the number of students who got a majority of answers correct, then give them the five.

The College Board, who writes and grades the tests, have the intentions on making a bell curve of the grades every year. This means that the number of students who get a 1 and 5 are the smallest amount, with 2s and 3s being slightly larger, and the majority of students receiving a 3.

The bell curve changes every year. If too many students got a 4, then the bell curve is shifted to the right, having those students receive a 3. This means that a student who receives a 5 one year could receive a 4 on the same test if too many other students did better than him.

Darrel James, former Assistant Chief Reader at College Board explains why they do this.

“If a bunch of students do well, it’s considered easy to Colleges.” said James. “Colleges wouldn’t give credit because they thought the test was too easy.”

When asked if a student that would pass one year could fail another because too many students did well James stated “[the test] is a competition. You’re basically competing with everyone else.”

[The test] is a competition. You’re basically competing with everyone else.”

James did, however, explain that if there were a large number of students who all got a 5 and all got the same percentage of questions correct, they would never put the break in between the students. They would give the students all 5s, and the graph would be skewed.

He also said that he has never seen this happen because never do so many students get the same grade.

If the test were to not be scored like this, and a percentage is set every year without change, more students could receive a five than in this style of grading. Therefore, it would lead colleges to not accept credit because too many students did well. So it does bring to question: would colleges look elsewhere? Having too many students be eligible for college credit would make the colleges look at something else of the student. This puts pressure on the College Board to maintain the difficulty on the test.

Think about this as well: if that is true, then is the College Board making it harder for students to get a 5 because they want the money of the students and they want the Colleges to look to their AP tests? Is this simply a business that is making money at the cost of students not being able to qualify for college benefits?