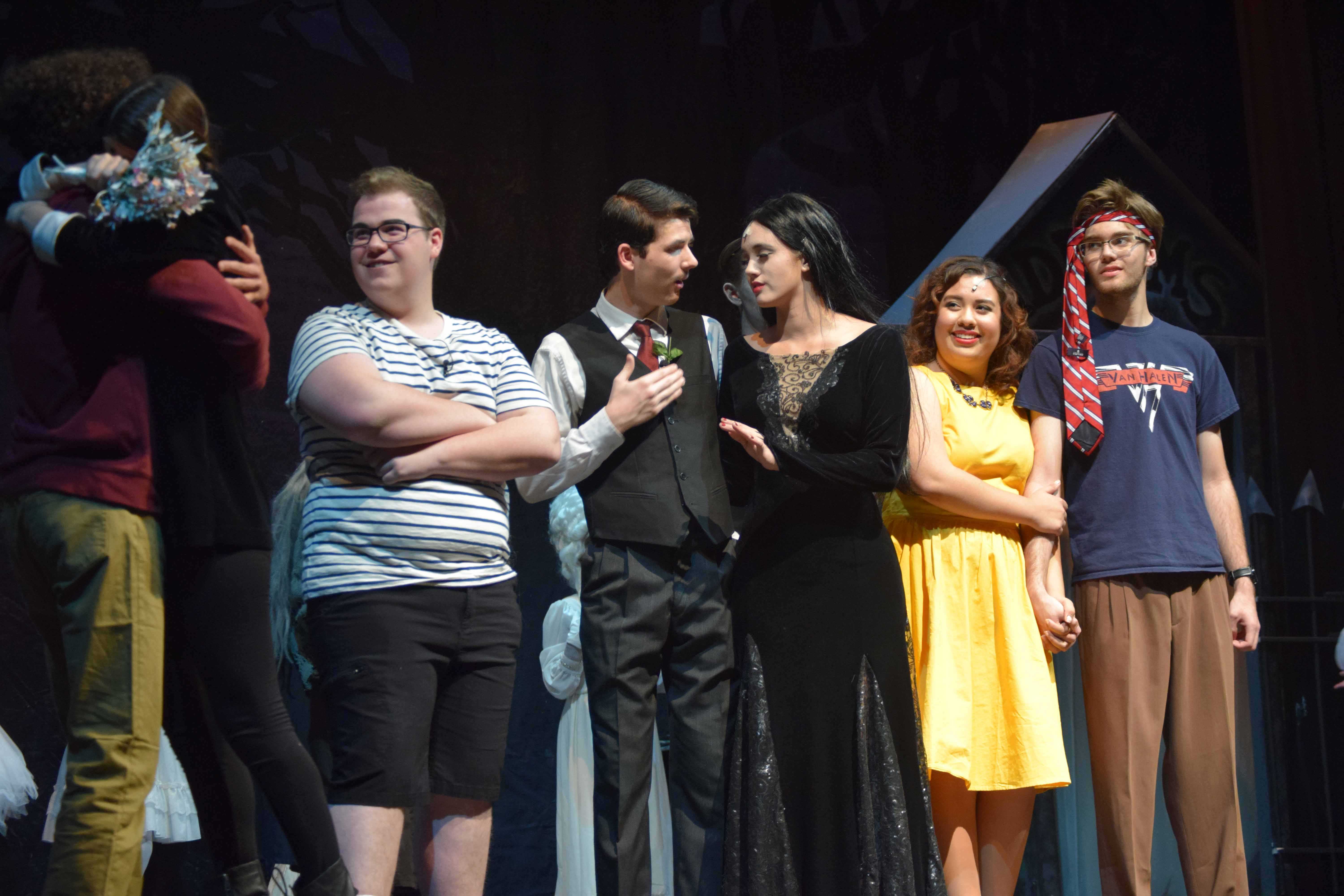 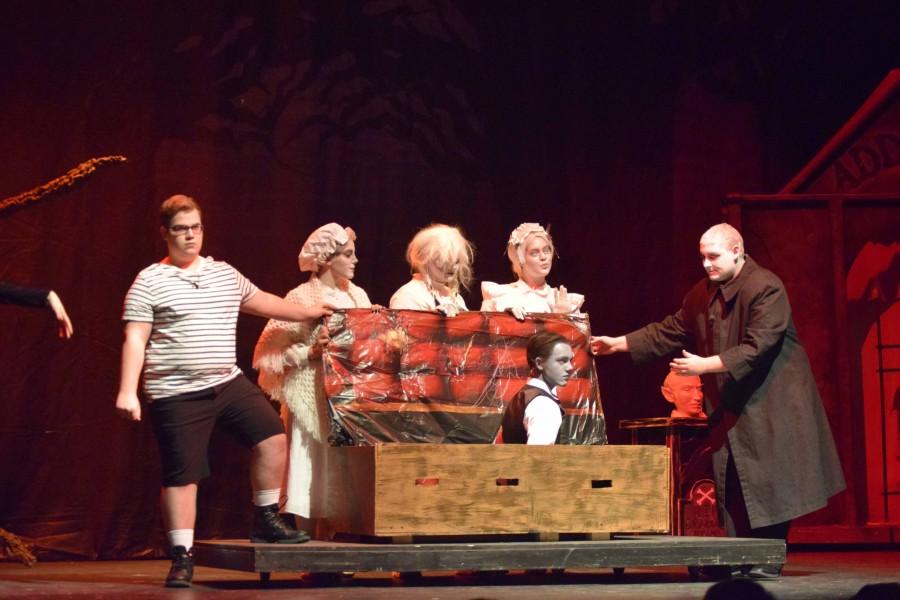 Gallery|22 Photos
Travis Robertson
Lurch, played by senior Ryan Clark, rises from his coffin during the opening of the Addams Family.

In the darkness of the theater stage there stands a spooky house owned by none other than the Addams family. Here awaits a tale of forbidden teenage love that will push two families to their limits.

The plot of this musical brings the typical teenage love story into the home of the Addams where a generic tale becomes an absurd yet laugh out loud one.

The Addams Family are the inversion of the typical American family. This means they present themselves as sinister and flat out absurd, however at their hearts they are not an evil family. Take Pugsley Addams for instance, his favorite activity with his sister is being tortured.

The children: Wednesday, the brooding teenager who falls in love played by senior Arielle Amrein, and Pugsley, the young annoying child played by junior Jacob Shaffe.

The Addams encounter a new family in this play the Beineke’s including: Lucas, the family’s only son and Wednesday’s lover played by One Griffin, sophomore, Mal, a father who has lost himself to the monotony of work played by Nick Leach, sophomore and Alice, a falsely cheerful mother hiding her anger under a smile played by Sophia Chavez, senior.

This main cast is backed up by background actors/dancers played by 17 students known as ancestors and eight pit singers, background singers not seen on stage.

The heart of this love story rides on Gomez, Morticia, Wednesday, and Lucas as strong main characters. Each of the four actors playing these characters brought the passion needed for their roles.

Gomez’s Latin nature, eccentric gait, and hilarious attitude could only be carried by an actor as charismatic and dedicated as him. As Craig’s first starring role he went all out starting by dying his red hair the same black as Gomez’s. Craig brought a strong charisma to the role that had me craving more ridiculous moments with the character. At the same time Craig proved he can carry a serious scene when he and Wednesday shared a very emotional moment towards the end.

Morticia’s dark yet seductive manner would require a lot out of the actress who played her. Hsu went above and beyond in this role. Her performance as Morticia was spot-on. Every moment with Morticia was perfect and as Hsu’s first role she could not have performed any better. She is the most stand out performance of the show and my personal favorite of the cast.

Wednesday had to be the most brooding at all times who was still capable of showing her soft side with Lucas. Amrein excelled at this task and commanded any scene with her family while also being the teenager in “puppy love” with Lucas.

Lucas needed to the very regular teenager who seemed like he was raised for business, but he also needed to be capable of growing, over the course of the musical, to be a real Addams. Griffin managed to develop Lucas wonderfully over the course of the musical. Without a strong Lucas there would be no love story, which means without Griffin this story wouldn’t have been possible.

Whether it was a side character or main, every cast member brought passion to their roles and it showed in a strong performance from everyone.

Set design, directed by Niemic, Riley Fawcett and Racheal Arns, and costume design, directed by Niemic, Madelyn Sperry, Arilyn Streety and with a thank to MRHS, were perfect in this play. Each of the multiple sets was unique and pleasing to the eyes. My favorite set was the background of the Addams home which had a very intricate design going as far as to contain photos of the actors as the Addams Family.

Every costume featured perfectly fit the characters. Gomez’s complex and suave suit jacket is a perfect example of this. Each costume was very attentive to every detail. Whether this was the little pieces on each ancestor costume or the many elegant outfits of Morticia.

The script of the play was mostly adapted but contained moments that were clever references  to the modern world and the actors took some liberties with off the wall improv. Craig, being the current improv head, brought a multitude of improv moments from references politics or just clever jokes that played on the other actors dialogue.

Ultimately the show culminated in the amazing Full Disclosure scene. Here every character is present and discloses their darkest secrets. This was the best scene of the show.

The previous play from the theater department was Once on This Island. That musical was much more serious in comparison to Addams Family so the only real comparison that can be drawn between the two is Angwin’s performance. Once again Angwin gives a great performance in a side role. From playing a loving father to now the role of the ridiculous Fester, Angwin has shown that he is a very competent actor.

Nearly every minute of this two hour show was a joy to watch that lacked any real important faults. Each music piece, set, actor, line of the script, improvised moment and outfit, were amazing. The only nameable technical errors were some audio issues involving the mics which were few and far between.

Quite simply every member of the cast and crew on this play deserve praise for putting on this wonderful show. The Addams Family is just the kind of break we all need during these insane two weeks of testing and I can not recommend you go see it any more than I already have. So what are you waiting for? Go become apart of the Addams Family.

*Review based on opening night showing.