McLain Steps Up To Help Maximize The Student Body’s Potential 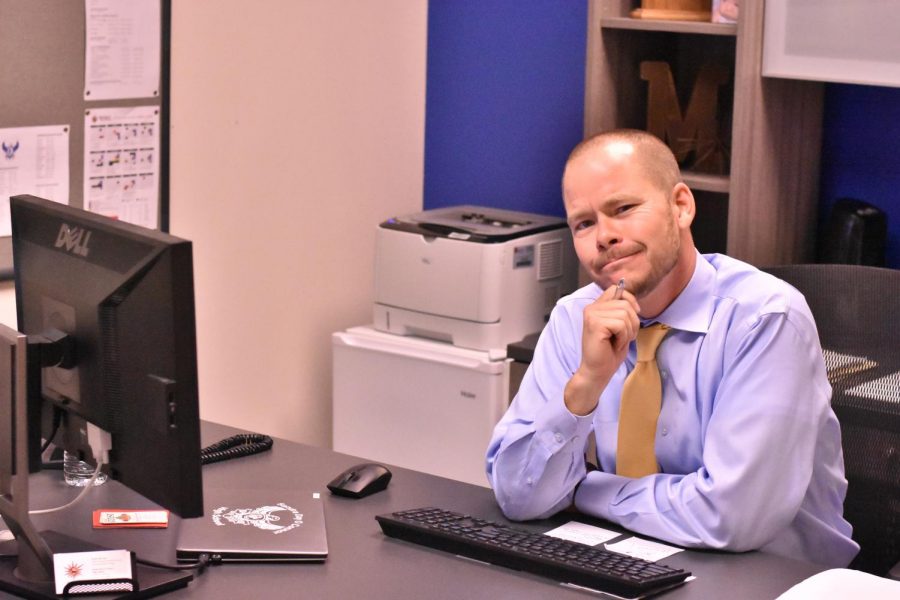 Mr. McLain makes a goofy countenance while working in his office.

OHS is growing fast, and as the student body continues to grow, it requires more guidance. This new school year calls for staff members to take on higher ranking leadership roles. Justin McLain, one of OHS’s Assistant Principals, was one of them, and he has found himself in the role of Athletic Director this year.

Before having his current role, McLain was a long time member of the math department. On top of his experience gained as a teacher, he also had experience in being a coach as he helped lead multiple sports teams.

McLain claims that the role of Athletic Director and Assistant Principal fits the criteria for everything he loves about working in education. So when the opportunity arose, he eagerly accepted it.

“Athletics was the reason that I got into education, because they go hand in hand, and I love teaching and I love coaching. I absolutely jumped on it when I had the opportunity, and it has been awesome,” McLain said.

This background helped him in getting ready to take on the challenges he now faces. On any given day, McLain has to deal with the general needs of students and teachers on campus. He juggles multiple school monitoring activities, such as regular teacher evaluations, overlooking clubs on campus, and handling student discipline. However, McLain’s main focus is overseeing the athletic clubs on campus.

“For our school I evaluate the athletic coaches. I’m over the facilities, the athletic budget, the mission of the program, coach evaluations, and new coaches. When decisions need to be made they go through me, and we collaborate and have a team decision for big problems that may arise. My goal is to really empower coaches to be the leaders, and hope that they are empowering student athletes to be leaders and captains, and to help manage their individual teams,” McLain said.

Having access to the stats of each team, McLain is able to gauge which teams has the most improvement. When asked what makes an athletic club more successful, McLain emphasized that the little things are what truly matter.

“The teams that typically tend to be successful are the teams that do the little things the right way in the long run. So you look at the coaches that have been on campus since the beginning, and look at how they run their program, look at the expectations they have for their athletes, and those are the programs that are the most successful,” McLain said.

As an example, McLain points to the success of the spring sports, whose coaches have proven through their team’s performance just how important it is to set the right goals and expectations for student athletes.

“It’s been our spring sports that have really helped us out, with softball winning the state championship last year, and baseball winning it the year before that. It’s those coaches that do the right thing over the long period of time that I have seen have the most success. It’s the coaches that have the ability to maximize their player’s effort within the time frame that they have,” McLain said.

With everything on his plate, McLain appreciates that he doesn’t have to handle it all on his own. OHS’s staff works as a team, and he is thankful for the other members that have helped make his monumental tasks more manageable.

“I have to give a lot of credit to Sue Perreault. She is the athletic secretary. She does an amazing job of helping keep the coaches in compliance to the necessary credentials to coach. She is also a huge factor in a lot of those day to day operations,” McLain said.

When asked if he could tell one thing to students at OHS, McLain stresses our school to widen its competitive scope to encompass more than just our schools rivals, and to take advantage of the limited time we have here as students on campus.