Virtual NFL draft proves to be a success for fans 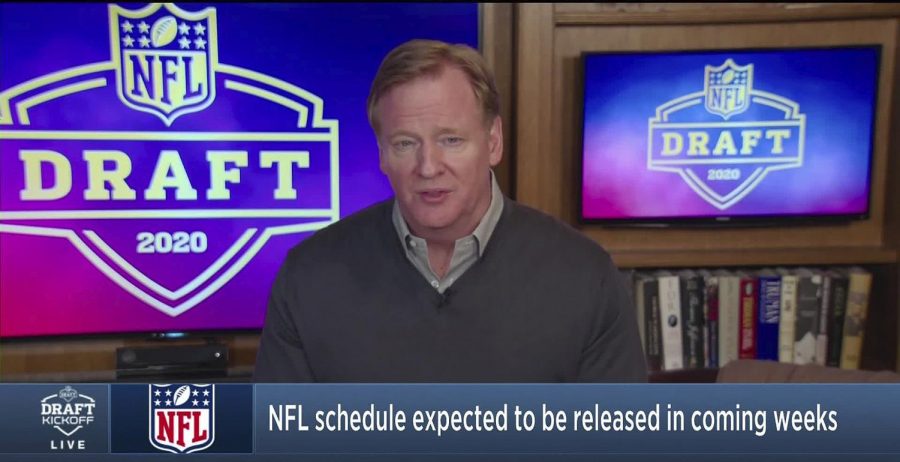 NFL Commissioner a Roger Goodell announced the 2020 draft picks from his basement during the fully virtual draft.

In a time where sports fans are starved for entertainment, the NFL draft was a welcome sight, even though it took place in a unique format. Despite the situation surrounding COVID-19, the NFL decided to hold the draft as scheduled from April 23-25, moving it to a fully virtual event. Though there were worries about having technological difficulties, the three-day event went smoothly without any major hiccups. While some traditions, such as draftees walking the stage and hugging commissioner Roger Goodell, were missing, the NFL tried to make the experience realistic for players and fans. Players still received team hats and jerseys, while fans from each team were brought in by video to cheer on their draft picks and boo Goodell. The draft was overall a huge win for the football community, as it drew in record viewers and provided fans with much needed sports. However, some teams may not see the draft as a victory, while others walk away with much needed help to become contenders.

Surprisingly, this year’s top 10 saw no trades as the draft panned out almost exactly as many experts expected. LSU quarterback and Heisman winner Joe Burrow went first overall to the Cincinnati Bengals, and he was followed by DE Chase Young and CB Jeff Okudah, both out of Ohio State. The first mild surprise was the New York Giants selecting offensive tackle Andrew Thomas with the fourth pick, but the Giants desperately needed help on the offensive line and Thomas was still a highly ranked prospect. Two more quarterbacks came off the board, with Tua Tagovailoa going to the Miami Dolphins and Justin Herbert heading to the Los Angeles Chargers. Sitting at pick number eight, the Arizona Cardinals came away with one of the best value picks in the draft as versatile Clemson linebacker Isaiah Simmons fell into their laps. Despite needs at offensive tackle, Simmons’ immense potential and ability to play at multiple positions was too enticing, and he will immediately help shore up the Cardinals’ porous defense.

Outside the top 10, there was a predictable run on wide receivers, starting with Alabama receiver Henry Ruggs being drafted by the Las Vegas Raiders. The first trade of the draft occurred when the San Francisco 49ers and Tampa Bay Buccaneers swapped picks. The Buccaneers moved up to the 14th slot to draft offensive tackle Tristan Wirfs, who will help protect new quarterback Tom Brady. The rest of the first round saw five more receivers drafted from a very deep class, but one team that notably passed on a receiver was the Green Bay Packers. In the biggest shocker of the draft, the Packers took quarterback Jordan Love out of Utah State, despite already having one of the best quarterbacks in the league with Aaron Rodgers, who desperately needed wide receiver help last season. And to make matters worse, the Packers did not select a receiver in the entire draft, even though a record 37 receivers were drafted.

Another head-scratching move came in the second round, when the Philadelphia Eagles picked Oklahoma quarterback Jalen Hurts. The Eagles already had a solid starting quarterback in Carson Wentz, but evidently decided that Hurts would provide solid backup play to the injury-prone Wentz. Reports have also said that they hope to use Hurts as a gadget player, so that he would be used in many different positions and on trick plays, but a second round pick seems to be a high price for such a player.

The last few rounds of the draft did not see many major moves, although there were a few minor surprises. In the third round, the Cardinals came away with another steal, as offensive tackle Josh Jones, who was predicted to be a first round pick, miraculously fell to them. Jones will provide offensive line depth to the Cardinals who gave up over 40 sacks last year, and could become a starter in the near future. More moves also happened with offensive lineman as disgruntled offensive tackle Trent Williams finally got traded from the Washington Redskins to the 49ers, who are looking to return to the Super Bowl with a fortified roster.

While some teams came away from the draft with significant improvements, others made moves that were simply dumbfounding. The one clear winner, however, was sports fans, who finally had some event to analyze. The draft proved to be just as entertaining as NFL free agency, and the offseason has fans excited about the upcoming season. But while the virtual offseason has been great, the season will only begin if the current situation improves. With the results of the draft finally in, fans can only hope that the NFL remains on schedule for opening kickoff.