OHS’ softball legacy lives on in the new season 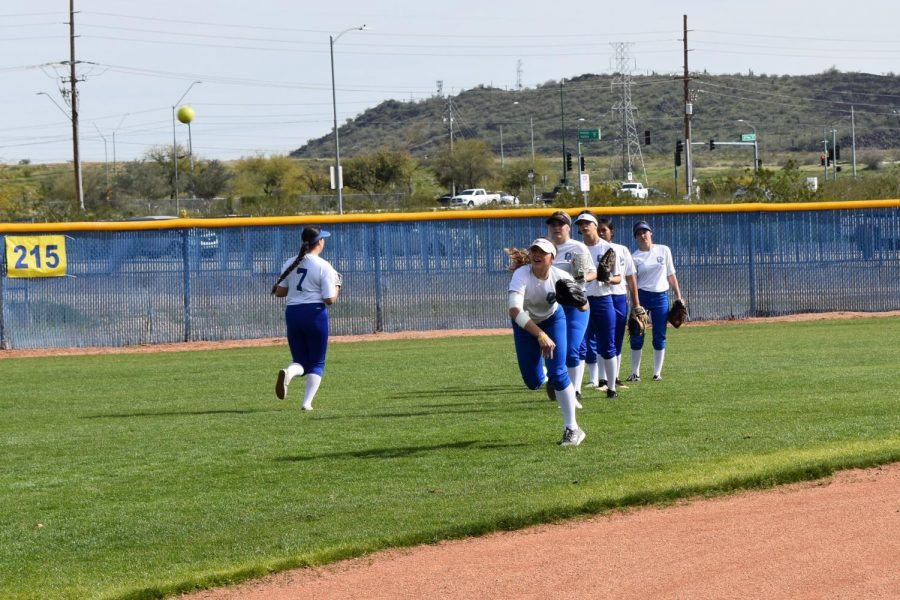 The team practices their throws on the field.

After a legendary and unforgettable 2019 softball season, the OHS softball team confronts the 2020 season head on and with humble confidence. The team’s perseverance and diligent work led them to a glorious win at state last year. Their success and hard work has carried over into this upcoming season.

Last year’s win at state is a memory that will live on forever. As the 2020 season is underway, the varsity team is motivated by the thought of a second win at state.

“It was really cool to be able to share that experience with a group of girls that we are so close with. It was a once in a lifetime experience,” said Villae Scusa, junior.

Despite an illustrious win at state last year, each member of the OHS softball team has continued to train hard and uphold a self-effacing attitude.

“We all have the same common goal: to get back to state. It is going to be hard, because everyone is going to be gunning for us. But, if we just play our game and just process and work everyday, that we could get back there, and that’s everyone’s goal,” said Rylee Holtorf, junior.

The team is without a doubt capable of making it to state again this season. Although, it may require a little extra effort this year, seeing as they lost five seniors last year.

“A lot of people have to step up in leadership. I think we are doing a good job of getting back to the level of capability and team chemistry we had last year,” Scusa said.

As always, when one door closes, another one opens. The loss of a couple of seniors made way for the addition of a handful of new girls on the varsity softball team.

Each member of the team shares a similar attitude. An attitude of humility, modesty, honor, dedication, and efficiency is what has guided the team to success in the past few years.

“The mentality is pretty much just knowing that I have my teammates’ back. and knowing that I’m going to go all out, so that they know I am working hard for them, and vice versa. We know that we have each other’s back. We are all just goofballs, we like to joke around. Having each other be like best friends, constantly being with each other, really helps because we just form a bond that is pretty amazing,” Scusa said.

The unbreakable bond between each member of the team is not built solely on the field. It takes additional time outside of practices, to build the strong relationship that led the team to a state win last year.

“We do a team dinner once a week. Different families host each week. We went to top golf once. We just do fun things together because we like to be together,” Holtorf said. “It helps knowing we are all best friends. We can push each other and hold each other accountable, but know that we are doing it out of love.”

The unbreakable relationship and bond formed between each team member contributes to the team’s unlimited potential. In addition, their hard work and extreme dedication to softball will allow them to fulfill that potential.

“Practices are very intense, they are very high paced, and we try to make it so that the games are easier than the practices,” Scusa said.

Talent, commitment, team chemistry, and most importantly attitude, all go into making this outstanding team. The varsity team is off to a great start, with an overall win at their first tournament of the season.

“I think we are all pretty confident in the team this year. We know the potential that we have, but we still have to earn everything that we do,” Holtorf said. “We aren’t going into this season cocky, we are going in humble, but with the attitude of knowing that we are capable. We are going to practice hard in order to get back to state.”

Following varsity’s example, is the junior varsity team. Many of the girls had the opportunity to play together last season. Their main goal for the 2020 season is to master every skill and discover everyone’s strengths and weaknesses.

“I really look up to the varsity girls. They have such good team chemistry. We are working on getting closer as a team right now. When we all get closer, we are going to play well together,” said Kira Loomis, freshman.

These girls know how important hard work is to achieving success. They commit to six days of three hour long, difficult practices each week.

“Practices are good and simple. Practices are pretty fast paced, so we are always getting stuff done. We are just going over the basics, so we know that everyone has the hang of it,” said Mazi Skinner, freshman.

Seeing as the JV team is made up of a handful of freshmen, the majority have never had the opportunity to play together. As the season begins, creating a team founded on friendships is the main goal, as great team chemistry leads directly to a triumphant season. After their first game vs Desert Vista, the team left with a score of seven to eight.

“I think the season is going to go well. The closer we get as a team, the better we will perform in games,” Skinner said.

“As the freshman team, we already feel like we are bonding really well as a team. We all work really well together. It’s been really easy to get close with the girls on the team,” said Ria Rich, freshman.

It takes practice working together to ensure that the team will be successful on the field.

“Practices are very structured, but they are fun,” said Kira Loomis, freshman. “Practices vary day to day. The first week was the hardest because she [the coach] was trying to get us all in line. But it is a little more relaxed now.”

At this point in the season, the freshman team is doing well. They are conquering the basics, working together, discovering everyone’s individual strengths and weaknesses, and really getting along as a team. With their first game down, the freshman team is doing well. The score of their first game against Desert Vista was ten to 17.

“I think this season is going to be decently successful. As long as everyone tries hard in practice, has a good attitude, and follows directions, we are going to have a successful season,” Rich said.

Due to the talon going to print, scores can be found at aia365.com.