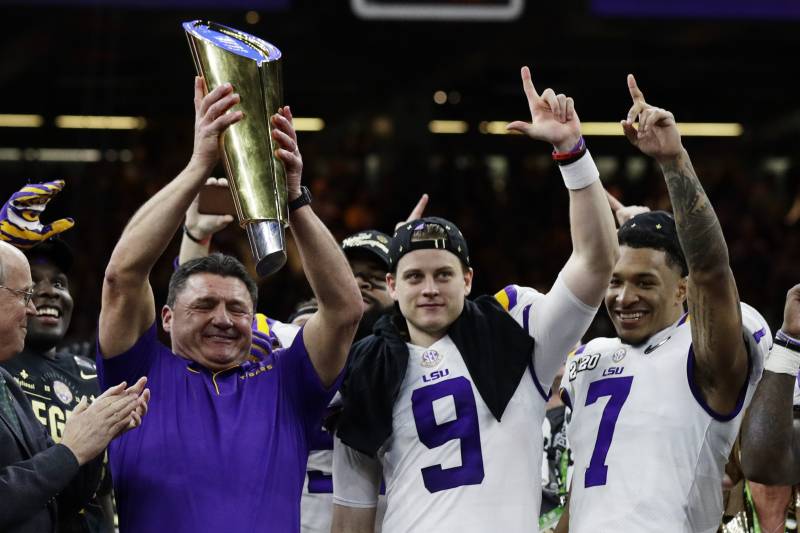 LSU outlasted Clemson in the College Football Playoff National Playoff by a score of 42-25 as quarterback Joe Burrow led his team to another impressive victory in his final college game.

Coming off a 16 TD season in 2018, Burrow was never expected to become the focal point of a talented LSU team. Instead, Burrow shocked the nation as he compiled one of the greatest individual seasons ever seen in college football, won the Heisman Trophy, and led his team to the College Football Playoff.

Even on the nation’s biggest stage, Burrow was unfazed, as he accounted for six touchdowns and 521 yards against Clemson in the National Championship. In his historic season, Burrow threw for 60 touchdowns and 5671 yards, while becoming the frontrunner for the first pick in the NFL draft.

However, it wasn’t all easy sailing for LSU against Clemson. The Tigers from South Carolina struck first on a Trevor Lawrence rushing touchdown, and held a 17-7 lead in the second quarter.

Then Burrow came to life. In just over 10 minutes before halftime, he threw for two touchdowns and ran for another, giving LSU a 28-17 lead. Wide receiver Ja’ Marr Chase caught two touchdowns in the first half, and ended the game with nine receptions for 221 yards.

In the second half, Clemson stifled LSU on their first drive and cut the LSU lead to three points with a touchdown run by Travis Etienne. From that point on, however, it was all LSU.

The LSU defense allowed no more points from Clemson, and Burrow threw for two more touchdowns to put the game out of reach, as they won 42-25. Of course, Burrow was named the game’s offensive MVP, while linebacker Patrick Queen won the defensive MVP as he totaled eight tackles and 0.5 sacks.

LSU finished the season at 15-0 and will hope to take their success into next year, though they will be starting a new quarterback. Clemson enters next season as the title favorite, mainly because Lawrence will be returning for one more year. But for now, the championship and glory belong to Burrow’s Tigers.