Wrestling pins the competition to the ground 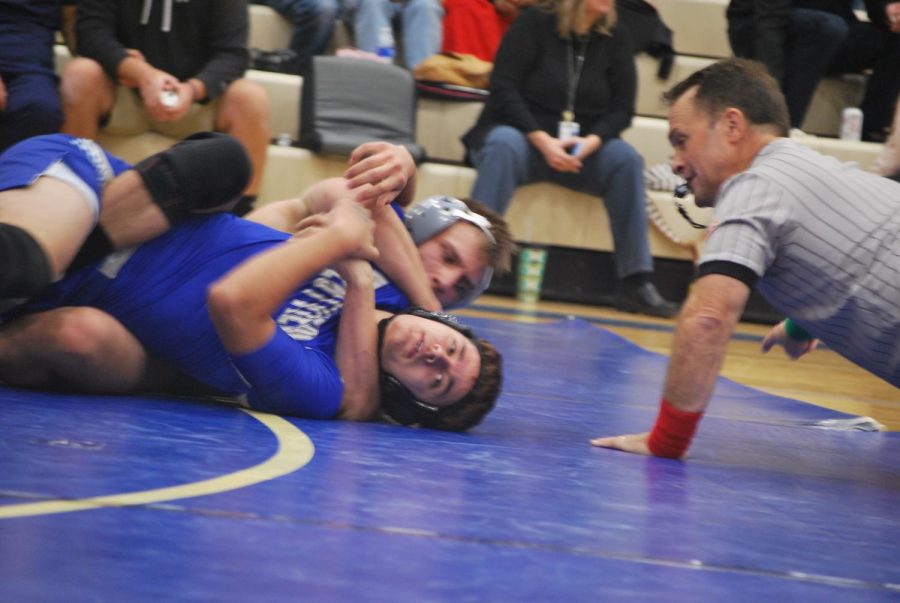 Matthew Andonov, senior, duels it out with wrestler from Westview.

Varsity
Wrestling season has just started, and with only a few matches under their belts, OHS wrestlers are already feeling strong about the remainder of the season. Their training is rigorous, and they all have a sense of camaraderie, despite wrestling being a mainly individual sport.
Their first match of the season was against Chaparral and Westview, which was hosted at OHS on Nov 26, and their next upcoming match is against Mountain Pointe High School and Pinnacle on Dec 11 at 4 pm.
Evan South, junior, says that wrestling is different than any other sport, such as football or baseball, since it’s not as much of a team sport. South has been wrestling since middle school when his dad introduced it to him, and this is his first year on varsity.
“The fact that it’s an individual team sport. The fact that you have to win on your own. You can’t just take a win or a loss as a team, it’s a win or a loss individually. I believe this makes wrestling more competitive because nobody wants to lose, so they have to be better, or they just don’t make it. I felt satisfied knowing I was the one at fault whether I won or lost,” South said.
Roman Pagaduan, sophomore, is also brand new to varsity this year. Pagaduan is on football as well as wrestling, and believes that wrestling is a lot more intense than football.
“I think that wrestling is on another level. There’s no water breaks during practice, to simulate a match. You’re not going to get a water break or any breaks during a match, so why would we in practice? Wrestling is all about stamina. Wrestling is super tiring,” Pagaduan said.
One of the few seniors one the team, Hugh Sterns, chose to do wrestling for the workout and how hard the work ethic is.
“Well I wanted to do year round sports, but I liked the work ethics. It’s just really tough, and you have to have a tough mentality, with all the cardio that we do,” Sterns said.
Jackson Morgan, freshman, loves the team and feels close with the team, despite the lack of wrestling being a team sport. He’s been wrestling for two years, and was inspired by his friend back in North Carolina, who was a state runner up.
“We all have something in common, we’re all trying to win a state championship, we’re all working our butts off to be the very best, and when you have people working that grind with you, it just gives you a special bond with those people. We have a lot of tournaments and we get a lot of bonding experiences, since we usually stay overnight for some tournaments, with our teammates every single day,” Morgan said.
JV
The JV season began at the same time as the varsity season, and there are two separate JV teams, JVA and JVB, since there is no longer a freshman team. How it’s determined whether or not you’re on varsity or JV is with a match between the team called the Blue/Gold duel on Nov 23. To make it on varsity, they have to win twice against their peers.
JV and varsity travel together, and have similar schedules. JV does have an upcoming tournament on Dec 7 at Millennium High School, which is the Third Annual Millennium Tournament for only freshman, JV, and girls’ wrestling teams.
Tyson Chevel, sophomore, is passionate about wrestling and learned some tips from his dad. Cheval was on varsity last season, but lost a match at the Blue/Gold duel this year.
“It takes more passion. There’s lots of times when you want to quit, to be done with it, but you have to keep going. Just like any other sport but it’s a lot harder on you mentally. It’s either you love the sport or you don’t. The training beats you down and wears you out,” Cheval said.
Another wrestler on JV, Josiah Bruno, junior, enjoys the rigorous training of the sport and likes the challenge the sport brings. He enjoys feeling rewarded when he wins and when the training shows.
“I really wanted to challenge myself with something new. I really like that it’s just me versus someone else on the mat. I like the training aspect, and I’m able to push myself in a match to be stronger than someone. It’s rewarding to know when the work you put into training pays off on the mat, to be able to push yourself harder and harder everyday, and come out on top, because the training we do is very hard and rigorous,” Bruno said.
New to the team this year, Gabriel Jensen, sophomore, invites the challenge and also likes how it’s just him against another person. His brother convinced him to join since he was a former wrestler at Horizon High School.
“It’s an animal of its own. You’re using every part of your body, and you have to last six minutes, which doesn’t seem like a long time, but when you’re in there, fighting this other guy who’s also fighting back, who’s the same weight as you or if you’re going up in weight, can even weigh more than you, it’s just wear and tear until you see who lasts longer,” said Jensen.
Bruno could be considered as the JV team captain. He’s always there to help and support his fellow teammates on and off the mat and works hard in training and on the mat.
“I like the fact of being a leader in the room. Helping out my team, being on JV. It’s nice seeing my teammates win, and even though it is a mainly independent sport, you need your team to win a duel, and it’s rewarding to see everyone succeed around you and it’s good to see everyone do good around you,” Bruno said.
*Due to The Talon going to print, scores for upcoming matches can be found on AIA365.org.