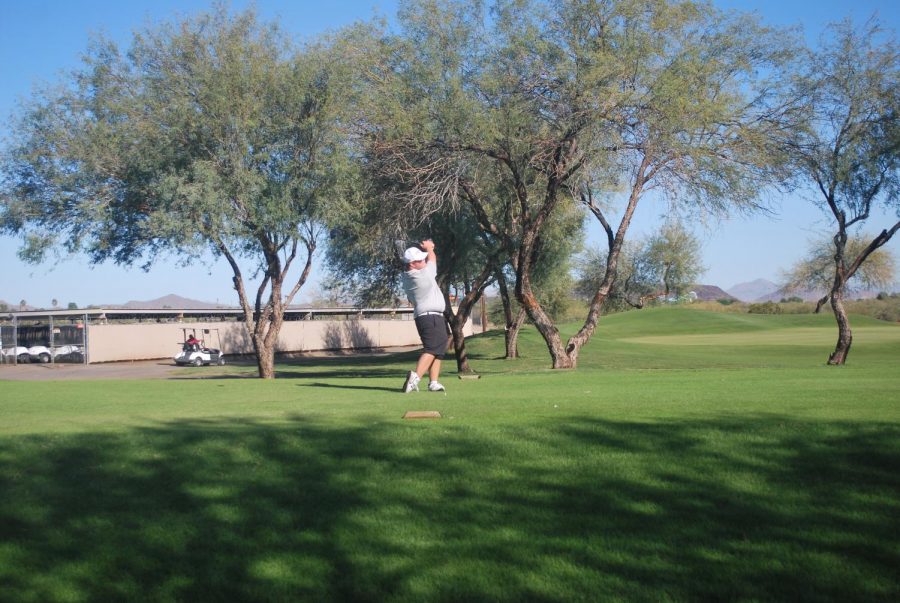 Boys’ golf kicked off the season tremendously and is planning on finishing the season strong with these next few games. The golf team has been averaging scores only a couple strokes above par, throughout the season.

In the past two matches, they placed second at the Chaparral Invitational, and fourth at the Dobson Invitational. On Tuesday, Oct 22, the team will host Mountain Ridge and Liberty at the 500 Club for the last game of the regular season. The team is coached by history teacher, Uriah Cross, who, as quoted by him, “is the best.”

Max Lyons, junior, has been on the team since his freshman year. He feels the golf team is a great experience for him, and has really enjoyed the team this year as a whole.

“Our team is definitely going to be state contenders and we have a lot more depth than last year. All the guys are supportive, and it’s nice that we get to work hard as a unit, and it’s pretty cool to see everyone on the range, helping each other with their swings and finding different angles and such,” Lyons said.

Matthew Rodi, senior, has been playing golf for most of his life and grew up around it. He’s been playing since his freshman year and feels that the team this year is going to go all the way.

“Overall, we’ve performed very well; everybody’s doing their part this year, so that’s a good sign to how well the team has been. We’re winning state this year,” Rodi said.

Girls’ golf team started out rough, but has since made up for it by playing phenomenally in their past few matches. The girls’ team is a small but hard working group of only nine players, each with their own strengths and weaknesses.

On Oct 3 they played in Cornville at Mingez Union High School, in which most of their players placed in the top five. The girls’ are currently in playoffs.

Sydney Dzwonkoski, senior, feels that she has grown since she first picked up a club in her sophomore year.

“I feel I have exceeded my expectations and have accomplished my goals. Looking back to when I started in my sophomore year, and I had never picked up a club or done anything and now looking back on this year, I have done a full 360 transformation,” Dzowonkoski said.

Kaelah Clothier, senior, has felt that the team has made great improvements since the beginning of the year. She loves this team more than anything, and believes them to be as close as a family.

“Our swings, in themselves, are getting better. And we’re having better contact with the ball and the end result is a lot better. More of our shots are going straighter and farther than before. It’s a lot of underclassmen, and they bring a light humor to the team that us seniors don’t have. It could be a dead silent bus, and then they’ll suddenly make a weak joke that just makes everybody laugh,” Clothier said.