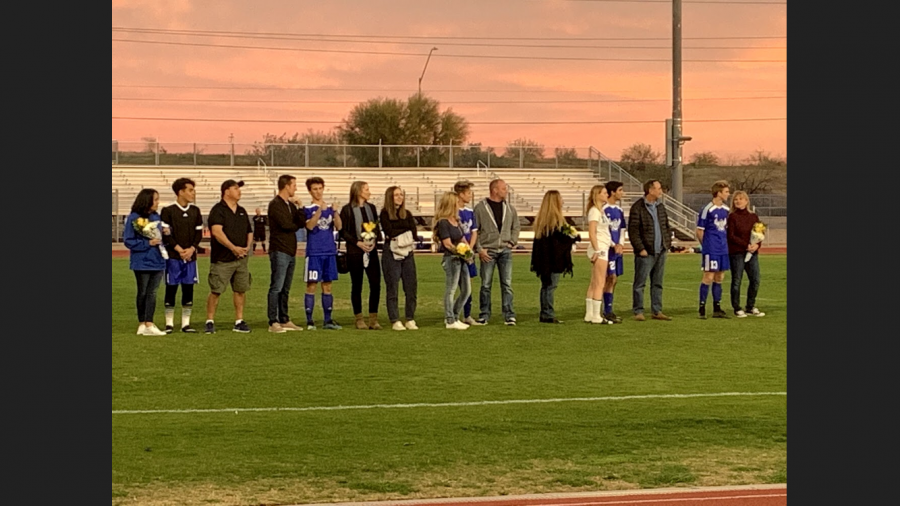 Seniors gather with their families on senior night to celebrate their successes and the hard work put into this year's season.

Soccer season is finishing off with a bang as the teams reminisce in the memories of past games and good times at senior night. Younger classmen start to think about the shoes they will have to fill next year after their senior teammates move on from the high school soccer field.

“Senior night is definitely a celebration. It’s a game where we can recognize our seniors for playing all four years, or even if they just played one year, just representing the legacy that they left [after] four years [of] playing on the team… it’s just loving on your seniors for a night,” Matthews said.

For seniors, the game on senior night is just as important as the ceremony. It’s a chance for them to play their hardest and make their team proud.

“Just to give it your all because it’s your last home game, but to really lay it all out there and have everyone in the stands be happy with you and the way you played,” said David Case, senior.

Senior night is a time where the spotlight shines down on the students and showcases all the effort and hard work they had put in over the years. In this case, students have to put their nervous energy aside and focus on the game.

“For us seniors it’s definitely nerves because it’s the one night that everyone is paying attention to you. So to prepare for that night, it was putting your emotions aside when you’re on the field and then those moments in between the game when you’re looking back at everything, it’s hard not to let all those emotions get to you,” said Haley Matthews, senior.

After high school, some seniors will continue their soccer career in college. After taking from their past experiences, they will apply what they learned in high school on the field in college.

“Definitely the aspect of earning your spot on the team because freshman year I didn’t get to play much because of my injury and so sophomore year I definitely had to step up to earn that starting spot that girls had already pretty much instated their freshman year. And so I feel like definitely college is going to be the same way. Like I have to get used to earning my spot and earning that playing time because it’s not just given to you in college,” Matthews said.

Overall, senior night was a gratifying finish to the soccer season. It was a night for seniors and their teammates to relive the memories that will stick with them for years to come.