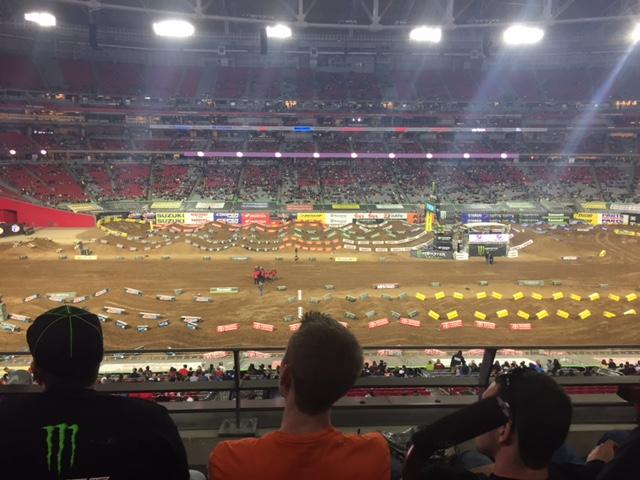 This is the second year in a row Phoenix Supercross has a long straight away to begin the race.

The Monster Energy AMA Supercross round four race was held in the University of Phoenix stadium on Jan. 28. The night consisted of several qualifying practices during the day and 10 night races.

Qualifying and practice started off with some crashes from 450 riders Josh Grant and Weston Pieck. Grant was left unharmed and was able to line up at the gate for the main event. There is news of a possible wrist injury for Pieck, who was unable to finish racing.

Last weeks race in Anaheim, California, resulted in the then current 450SX points leader to be hospitalized after a hard crash during the main event. Ken Roczen suffered from a dislocated wrist, elbow, and compounded radius. He is currently resided in Colorado seeing specialists.

Due to Roczen’s crash, three time Supercross champ, Ryan Dungey, was able to take home his first win of the season and become the 450SX points leader in Anaheim. Many fans were excited to see Dungey gain the points lead, but some believed with Roczen gone, Dungey would easily win the 2017 AMA Supercross 450 title with little to no fight.

“I feel like if Roczen would have been in it, he probably would have done a lot better than he did last week,” said Ethan Jezulin, sophomore.

In the 250SX class, current points leader, Shane McElrath, coming off from a second place finish in Anaheim, looked determined as he set the fifth fastest lap time during qualifying.

However, due to a crash during Heat Race two, McElrath was forced to go to the Last Chance Qualifying race to gain a spot in the Main Event. Luckily for the rider, he won the LCQ and was able to advance.

One of the rhythm section, where McElrath crashed, had been claiming riders all day. It became an area to watch and be careful going though.

The 450SX Heat one winner was Eli Tomac, and Heat two winner was David Millsaps.

During Heat one, there was some complications between riders Jason Anderson and Cooper Webb in the sand section. On the final lap of the race, Anderson tried to pass Webb for the final transfer position into the Main, but ended up taking out the both of them. This sent both riders to the Semi’s.

Lappers allowed Hill to make the pass on McElrath and win the race. McElrath ended in second and Forkner in third, who made the podium for the first time in his pro SX career.

After Tomac’s impressive Heat win, there showed possibilities of the rider making the podium or winning for the first time this season. Tomac won in Phoenix back in 2015 when he was racing for Geico Honda.

After the gate drop of the last Main Event at the University of Phoenix stadium, Tomac got the hole shot and began to pull away from the rest of the pack. While Tomac continued to pull away, the fight for third was between Dungey and Chad Reed.

Dungey and Reed continued to make moves until they closed in on Cole Seely who was riding in second placed and was passed by both the riders. While Seely tried to block Dungey’s passes, Reed got them both, and moved into second place.

Reed closed in on Tomac’s almost 18 second lead and got it down to 11 seconds at the conclusion of the race.

“I was kind of excited because a few years ago Reed used to be a top rider and was winning at the time and then the last couple years he hasn’t been the greatest. So seeing him come back was surprising,” Jezulin said.

Tomac brought home his first win of the season, along with Reed who made his first podium this year. The points leader, Dungey, ended in third place and will continue to keep his points lead and red plate.