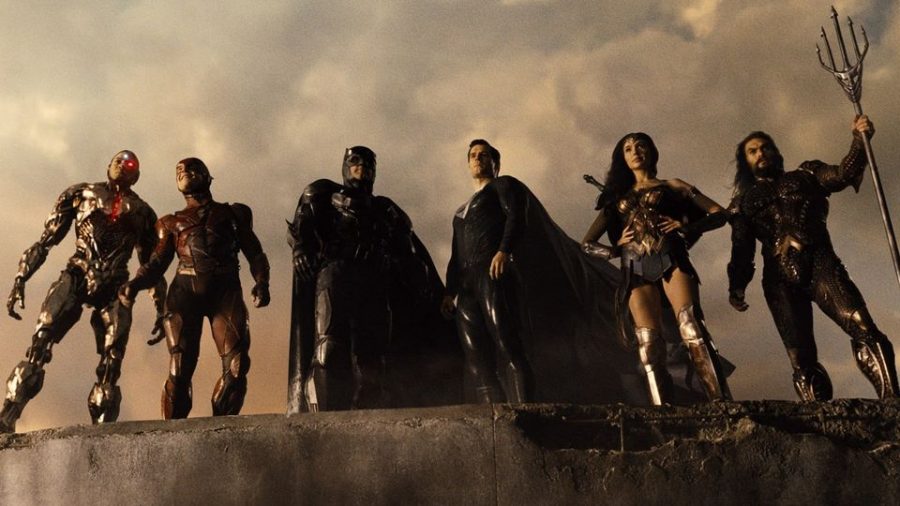 Back in 2017, DC and Warner Bros released “Justice League” directed by Zack Snyder and Joss Whedon. It’s a film that suffered a tremendous amount of studio interference, due to the original director, Zack Snyder, who previously directed “Man of Steel” and “Batman vs Superman: Dawn of Justice”, leaving because of a family tragedy. Wanting to release the film by a certain date, WB decided to bring infamous writer/director Joss Whedon, responsible for the first two Marvel Avengers films, in to reshoot and rewrite the majority of the film. The WB executives wanted the film to be cut down to less than two hours, with more comedy and a light-hearted tone added in.

This resulted in the final product having very unpolished VFX, sickly color grading, distasteful jokes, and a lot to be desired. It made a measly 600 million compared to Avengers (2012), which made over one billion. The film was met with overwhelming disgust, as it tried to appeal to everyone, but ultimately appealed to no one, with both critics and audiences hating it.

Fans began demanding for the studio to release the original cut of the film, made by Snyder. This led to the popularized “Release the Snyder Cut” hashtag. After years of asking and petitioning, WB and HBO Max finally caved in, announcing that Snyder will get to edit and finish his original cut of the film, with a release date of March 18 and a run time of a whopping four hours, with only six minutes of new footage.

While it’s fantastic to see a director get his full vision released, especially considering the restrictive landscape of Hollywood, the film doesn’t get a pass. The movie was extremely enjoyable, but it was horribly constructed. The film contains so much fluff with zero substance, very repetitive editing, and, most importantly, a fundamentally broken story.

There are so many scenes that could have very easily been cut down in this four-hour movie. There are whole scenes where there is no sort of plot progression, character development, or world-building. And if there are scenes containing any of those things, they typically contain more footage than needing. Possibly including unnecessary establishing shots, that are just used to show off the special effects or set design. The problem here is the four-hour runtime isn’t justified. There is so much gratuitous content that adds absolutely nothing, which can really hinder the viewing experience and it most definitely messes with the pacing.

Not to mention the repetitive slow motion with every single action sequence. The sad, but funny part being, slowing down the action can expose a lot of unremarkable choreography and bad VFX. The former being more applicable to the Snyder Cut. Zack Snyder tends to get really pretentious with his directing and editing. He likes to relish in his action, despite it being hilariously terrible. He loves to linger on characters’ faces or certain actions, despite there being little subtext or value.

It’s become a very annoying trope of Snyder’s to make every character idiotic for the sake of plot progression. One of the main characters, Cyborg, has the ability to control every piece of technology on the planet. That includes every military’s arsenal on Earth, so nukes, missiles, tanks, fighter jets, etc. So this leads to a greater question: Why wouldn’t Cyborg use his abilities to their fullest? Why not send nukes, missiles, or jets at the bad guys? Keep in mind, the Justice League doesn’t have to worry about civilians because the final battle takes place in a radioactive wasteland occupied by Steppenwolf and his soldiers. After his resurrection, Superman takes his sweet time helping the heroes in the final battle. He doesn’t show up until the absolute last second, and when he does, he’s borderline psychotic. He’s able to destroy Steppenwolf in seconds, but he takes his time, lasering his horns off and brutalizing him. This just reinforces that Snyder’s Superman is a maniac.

There’s also the constant issue of Wonder Woman’s powers. In “Batman vs Superman: Dawn of Justice”, Gal Gadot’s first outing as the heroine, she’s able to hit her bracelets together and create powerful shockwaves. This is probably her most powerful move, yet, she rarely uses it.

In order to combat the technologically advanced aliens the league is up against, Batman makes gauntlets that absorb and dissipate energy, which are made from a Krpytonian ship. This is actually a really cool concept because we get to see how a non-superhuman is able to take on aliens. Unfortunately, though, there are two major problems that destroy this. One, why doesn’t Batman make a full body suit out of this material? There’s nothing in the film saying that the material may be too heavy to make a suit out of, so there’s no excuse not for him to make a full suit out of the material. Two, when Superman is resurrected and confused about where he is, he attacks the Justice League. He shoots his heat vision at Batman, with Batman using his gauntlet to block the beam. The problem lies in the fact that Batman’s arm should be torn off by the laser. Back in “Man of Steel”, Superman is able to very easily tear through a Kryptonian ship with his heat vision. This is a blatant inconsistency.

The film is layered with stuff like this. The secondary villain, Darkseid, who was supposed to be the main villain in the sequel, is searching for the anti-life equation. If it’s easier, think of him like Thanos looking for the Infinity stones in the Marvel Universe. Darkseid has originally tried to conquer Earth thousands of years ago because he found the anti-life equation carved into the planet. Unfortunately for him, the Amazons, Atlanteans, humans, Zeus, and Ares fought and won a massive battle, wounding Darkseid and forcing him to flee. Apparently, Darkseid just forgot about Earth…for thousands of years.

The movie tries to provide the explanation that the “Mother Boxes” or the MacGuffins of the movie, warned Darkseid that Superman was too powerful of a being. Why didn’t Darkseid send Steppenwolf to retrieve the Mother Boxes sooner? What was stopping Darkseid from trying to conquer Earth again? These villains talk about Earth like they misplaced their car keys. How do the villains forget about a whole planet? Especially if this is the ONE planet that’s managed to beat you.

This destroys the worldbuilding a significant amount, on top of damaging the characters of Darkseid and Steppenwolf by making them terribly dumb. How is the audience supposed to be intimidated by these aliens if they can’t even remember the planet that contains the most powerful equation in the universe?

In general, there are numerous occasions where characters make really dumb decisions for either plot progression or to look cool, which Snyder is most known for. In the opening action sequence, Wonder Woman stops a group of terrorists from blowing up a museum. In an act of desperation, the last terrorist alive tries to kill the hostages but Wonder Woman blocks the bullets with her metal bracelets and super speed. The outcome of this is entirely in her hands. She can very easily disarm the terrorist with her lasso or her just raw strength and speed. What does she do instead? She used her aforementioned bracelets of submission that can level a building on one guy. In Snyder fashion, we see the full effect of this move, as it vaporizes the terrorist and takes the entire exterior of the museum out, with debris falling onto all the cops and first responders outside the building.

Most likely the greatest downfall of the Snyder Cut is the lack of development and lack of character for the entire cast. Cyborg, played by Ray Fisher, is adamant on not caring about the world because of the accident that turned him into a cyborg, but just before expressing his hate for the world, he gives money to a poor single mother. The Flash is just “I need friends”. Wonder Woman has some unexplained moral obligation to help. Batman wants to assemble the Justice League because it’s what Super would’ve wanted, and Aquaman is there because… reasons.

Every character is so one dimensional in their goals and traits, which the theatrical cut tried to improve upon back in 2017. It’s very unpopular to show any kind of praise for the theatrical cut, as it was mainly directed and rewritten by Joss Whedon, director of the first two Avengers movies. Yes, Whedon is a terrible person, due to several confirmed abuse allegations from his years on television but he did his absolute best to improve the writing of “Justice League”. He took out Flash’s ability to time travel and Cyborg’s ability to access every piece of technology. He also gave Batman and Wonder Woman legitimate character arcs. Wonder Woman had to live up to the leadership role, but was struggling to, given all the loss she’s suffered these past 100 years. Batman was simply struggling to fight aliens alongside gods, given that he’s only human. We actually saw the physical toll the battle was taking on Batman. One of the most poignant lines of the film is Bruce reflecting on the belief that Superman is more human than he, himself ever was. Superman actually has more dialogue in the Whedon cut than he does the Snyder cut. In the Snyder cut, Superman doesn’t give much insight on coming back to life, along with still being his apathetic self that Snyder has characterized him as for this entire franchise. In the Whedon Cut, Superman is written to be energetic and clearly happy to be alive, fully willing to help the Justice League.

Yes, Whedon gives Superman some very cheesy dialogue in the form of “I’m a fan of truth, but I’m also a big fan of justice”, or “Is this guy still bothering you?”, but he gives us so much more than Snyder. Superman actually cares about civilians for once in this entire franchise. He smiles, he cares, he’s Superman.

Snyder’s Superman, on the other hand, is rather sadistic when fighting Steppenwolf, going so far as to lasering one of his horns off and continuously beating him down, instead of simply putting an end to the fight.

Snyder is incredibly self-indulgent in his work. 10% of the film is in slow motion, which is about 24 minutes of the runtime. There are so many unnecessary scenes that were cut back in 2017, and for good reason. Too many establishing shots, too much slow motion, way too many unnecessary scenes that don’t add anything to the characters or story. Joss Whedon put an immense amount of effort in to fix whatever he could. Yes, he added in some jokes that were in very poor taste, along with the theatrical cut having terrible green screen and VFX. However, Whedon should be commended for trying, trying to salvage something out of the trash heap that was Snyder’s “vision.”