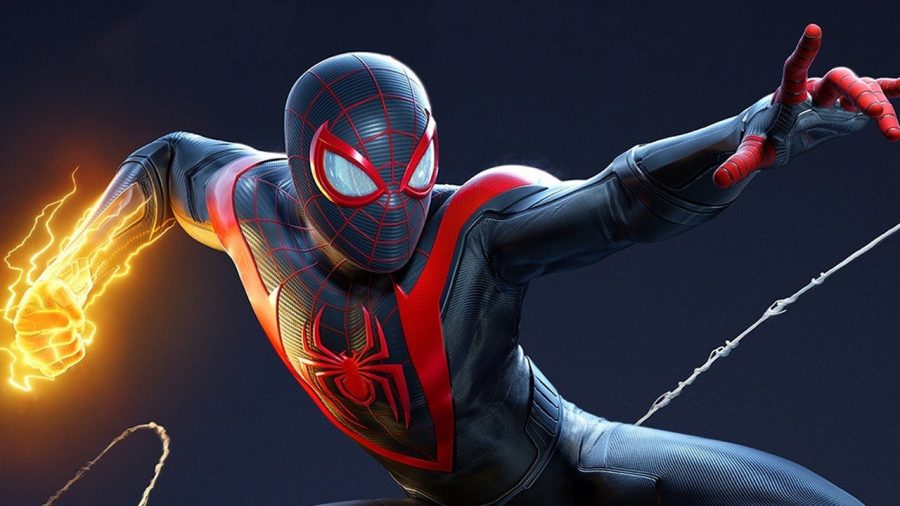 Insomniac’s latest game, “Spider-Man: Miles Morales”, for Playstation 4 and Playstation 5, had to fill big shoes after the massive success and stellar storytelling of the first game, “Marvel’s Spider-Man” on the Playstation 4. It’s sad to say that this game fails spectacularly. “Spider-Man: Miles Morales” still maintains the addictive combat and stealth system the last game managed to make on its own, but the story fundamentally fails and falls flat on its face.

The game takes place one year after “Marvel’s Spider-Man” and follows Peter Parker’s teenage protégé, Miles Morales, as he tries to carry the weight of the Spider-Man mantle while his mentor is off on vacation. This leads to one of the first major issues in the game: Peter Parker. Peter says he’s leaving to go help his girlfriend take pictures in Symkaria, a country turned war zone, so he’s leaving New York to Miles. This is out of character for Peter Parker because he would never leave his city just to go on a vacation and take pictures. The writers obviously want Peter out of the picture so that Miles can be on his own, which is fine as it is for their justification, but it is poorly done.

The story itself follows Miles as he tries to adjust to being New York’s only Spider-Man, running into constant foes, such as the Tinkerer, leader of the high tech “Underground”, and Roxxon, a shady energy corporation that has soldiers and tanks littered about the city. Why would the police be okay with an energy corporation having tanks and armed soldiers throughout the city? This happened in the last game and it didn’t turn out well due to poor worldbuilding. The logic of the universe is being broken so that the story can have another antagonist alongside Tinkerer, but it doesn’t work based on what we know about this universe.

This leads to a much larger, fundamental problem of the game: the lack of creativity. This story throws every basic trope at you unapologetically and smiles while doing it. Evil Corporation with a seemingly charming, but actually evil leader? Check. Best friend turns out to be a super villain, which becomes the driving conflict of the story? Check. That same villain turns over a new leaf and ends in a heroic sacrifice? Check. Goofy, nerdy sidekick friend? Check. This story doesn’t have a lick of originality. but that isn’t necessarily always a bad thing. While most stories contain a lot of basic tropes, they are masked by well-written characters and a well-constructed conflict. This game, however, doesn’t contain any of those.

It’s one thing to lack originality, it’s another when your story is a complete mess. The narrative is overflowing with plot holes and logical inconsistencies. As the plot moves forward, it hinges on characters making illogical decisions. Don’t mistake illogical for irrational, though. A character can make a decision that would be deemed irrational that might even compromise the plot but it can still work, as long as it’s in character. Illogical decisions are not choices that are in character but rather simply written to keep the plot moving forward. They might even turn out to be out of character, which can heavily damage the story.

“Spider-Man: Miles Morales” isn’t all bad though. Miles’ voice actor, Nadji Jeter, does an outstanding job and delivers a powerful performance that almost saves every scene he’s in. The game also managed to get Troy Baker, legendary voice actor most known for his role as Joel Miller in “The Last of Us”. Sadly, Insomniac fails to properly utilize the actor’s wide range and simply uses him for the “evil businessman” role. He has very little actual screen time in the story, despite being one of the main antagonists.

One thing this game absolutely nails is the music. Much like “Spider-Man: Into the Spider-Verse”, the game mixes orchestral with hip hop, which informs the audience of the character and the setting very well. “Marvel’s Spider-Man” had a much larger scale with a lot of the choices affecting New York as a whole, whereas “Spider-Man: Miles Morales” only affects Harlem, Miles’ hometown. So the player gets to be up close and personal with the Miles’ home. Most of the side missions involve the player helping out their fellow man.

As mentioned before, the gameplay is essentially the same as the last game with a few new features. Much like Peter Parker, Miles has the same super strength and web capabilities but with a twist. Miles’ spider-bite gave him the typical Spider-Man powers, on top of invisibility and an electric “venom” strike, where Miles summons a powerful current of electricity to take out his enemies. As for your traditional combat, Miles contains the exact same move set masked on different animations. The execution of his swagger and grace in his web-swinging, with animations of him diving while on his phone, putting his hands behind his head, and other charming animations really put his personality on display.

While the gameplay is fun, it’s difficult to overlook that the majority of the side missions are just assets reused from the first game. It’s very obvious that Sony wanted a launch title for the Playstation 5, so they had the developers cook up “Spider-Man: Miles Morales”, and it did not work for them in the long run. While this game is getting high praise, that doesn’t excuse the harrowing amount of problems and the stunning lack of innovation. For a game whose tagline is “Be Yourself”, “Spider-Man: Miles Morales” fails to do just that.