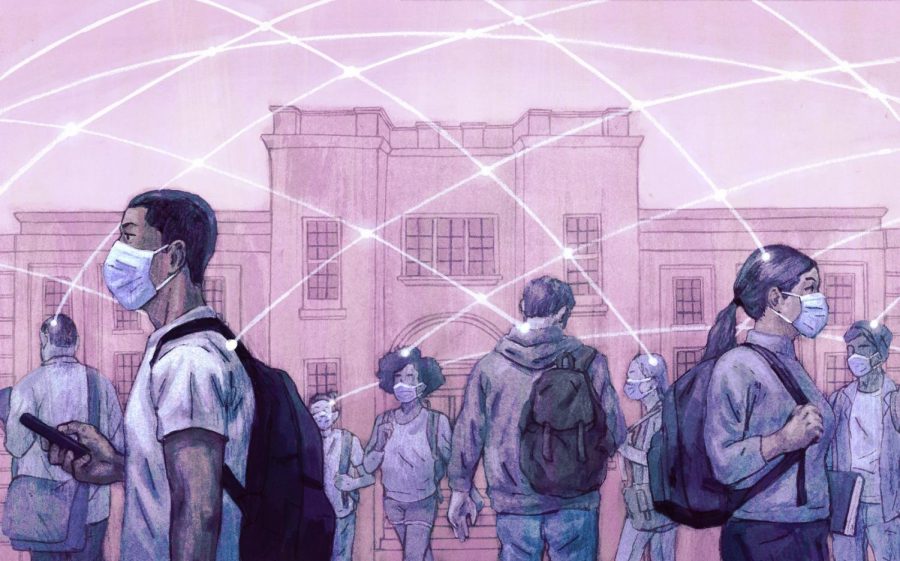 When the COVID-19 pandemic took place, the students’ goals for a productive and exciting last school year were put on hold indefinitely. On-campus learning was deemed unsafe, and students became used to the Zoom screens greeting them every morning as they socially distanced themselves from teachers and students. Until OHS announced their approval to bring students back to the campus, it was soon realized that the norm provided by a school schedule was going to change drastically.

Seniors, in particular, faced the first obstacles of heading back for on-campus learning, making the campus seem more spacious and less crowded than usual. With this more cautious approach of transitioning students from online to physical learning, it was more plausible for the seniors to follow the social distancing efforts as fewer students made the environment less imposing.

Stepping foot onto the OHS campus almost felt surreal as it felt like years had passed. Although the online shift for education created barriers that impeded in-person communication and social lives, it became the new norm for students of all grades. So, the seniors were akin to pioneers entering a new atmosphere in the midst of the pandemic, scoping out the perimeters and still wondering if health and safety are protected.

COVID-19 immediately made its presence known for the seniors who hesitantly walked into campus as they were surrounded by masks of all shapes and colors. After watching the news of outbreaks resulting from high schools’ campus reopenings, such as in Florida and Georgia, it can be said that seniors had the right to be hesitant and doubtful of the measures OHS was taking. Though some were back in the groove of things and chatted outside with friends, the growing distance between students continued to increase, and even the benches were limited to one person sitting at each one.

The school environment could almost be described as frigid as the seniors began to adapt to the physical boundaries rather than the online norm. And it only intensified once the school bell rang. Along with the changes the school implemented for on-campus learning, the school schedule differed, as well. With the bell ringing 15 minutes before the start of classes, students have an extended amount of time to enter their classes in order to prevent large masses of people swarming into the buildings. This seems to be a positive change as in the years prior to the pandemic, it was always a struggle to maneuver around the multitude of students who moved at varying speeds under a five minute period.

One issue that the seniors first discovered was the counter-clockwise direction students had to walk for every school building. This procedure to limit crowding and ensure a smooth, one-way path for students has merit, but it is bothersome. When entering and exiting buildings, some students find annoyance in walking in a loop rather than take the other direction to get to their class, and the pathways to get back into the buildings feel longer than necessary, especially when a student has classes in the same building.

After the prolonged journey towards the classroom, seniors moved into their socially distanced seating arrangements, removing close proximity with friends but continuing a mandate meant to look out for students’ health. In the classroom, it felt as if it was one last chance to overcome the initial awkwardness of first day jitters, or in this case, first day back on campus. The teachers would revert to their beloved teaching styles in the classroom, and learning would reflect the past years that seniors were comfortable with, but unfortunately, the definition of normalcy was not retained.

Since there are students who chose to remain online for their education, a majority of the two hours for each class period was spent with teachers setting up Zoom and learning still being more or less online. For those on campus, the environment still remained online; the only difference being that they were on Zoom in the classroom and not at home. Especially on the first two days, the seniors had to struggle with the patience it took to wait for the teachers’ Zoom meetings to load, and because learning became online-based to benefit every student no matter their location, those who were in the classroom did not have the same educational experiences of the past. The interactive and communicative aspects of learning are now strained, and only time will tell to see if the students and staff alike can gain a sense of comfort from this new adaptation of “back to school”.

Another important detail to add is productivity within school grounds. Students take three classes a day, which follows the previous Zoom schedule they had before switching to physical learning. Though some may say that the separation of classes per day decreases students’ learning for each subject. At the moment, it is advantageous as students become used to the social distancing rules and there is less contact between students.

What seems more detrimental is students’ participation in after-school activities, clubs being one of the most affected. Those in sports continue with their practices, but it is apparent that clubs have almost been placed in the sidelines. Zoom meetings remain to replace in-person social interaction, eliminating the more productive and exciting facets of joining a club. Still, it is understandable for sacrifices to be made during this initial stage of on-campus activities, but this unequal treatment can be unfair for students with multiple interests.

Despite the visible nuances, it is clear that the school has made efforts to ease students’ on-campus transition while still following the health and safety regulations to prevent the pandemic from impacting education even more. The seniors’ experiences serve as an example of the rocky road the rest of the students in each grade level will face for the remainder of this school year, but it is important to remember that the goals set out for high school have not disappeared, only changed. And supporting the school and its students represents the constancy still present in this environment that is essential in still completing those goals.