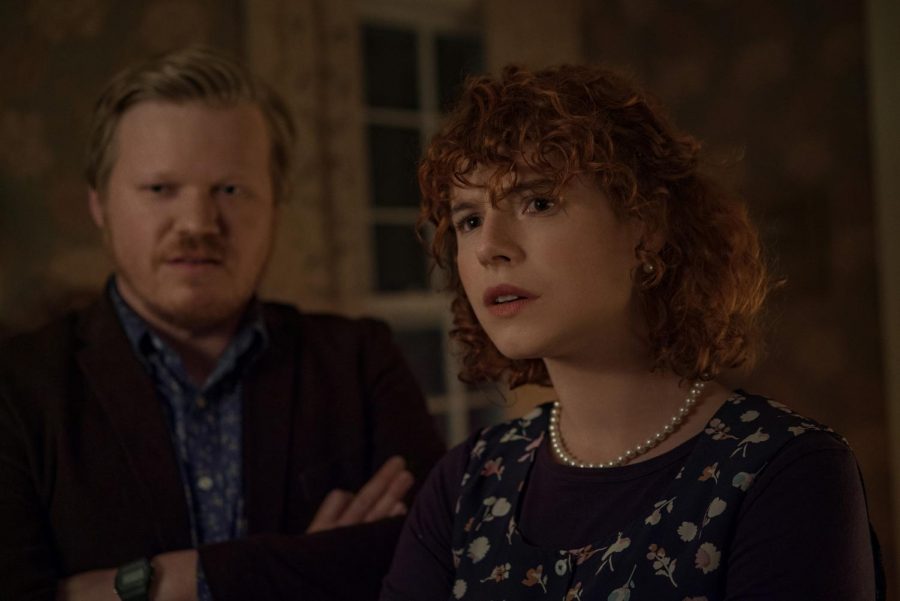 “I’m Thinking of Ending Things”, directed and written by Charlie Kaufman, is Netflix’s latest original that has people talking and sparked quite the debate on whether it’s a masterclass of storytelling and filmmaking, or a pretentious, hot mess that fails to tell a good story.

On the first watch through, the movie seemed to be a confusing mishmash with a very unsatisfactory ending. Upon a second though, the movie’s message is much clearer. Although the delivery of ideas seems a bit ham-handed.

No summary for this movie will do it justice, so the best thing that can be said is this; the movie follows a young woman and her boyfriend who go to meet the boyfriend’s parents on their farm, but things seem a bit off. You’ll notice that something is amiss. On top of that, the film is packed to the brim with subliminal messages, themes regarding parenthood and purpose, and many other grandiose ideas.

The easiest praises of the film are all of the technical aspects. The camera work and cinematography are meticulously crafted for every single scene. Every angle seems to have a purpose behind it, with shots of our main characters isolated or overwhelmed, which is defined by the beautiful set design and blocking.

The tone of this movie is akin to something from a dream, very confusing and missing logic in several places but once you sit on it for a bit, it all starts to fit into place. Throughout the film, we get glimpses of an old man, who is a janitor at a high school, doing his day by day. Majority of audiences have come to interpret the film as in the head of the janitor. Our main protagonist, Lucy, played by Jessie Buckley, is simply a figment of the janitor’s imagination. Throughout the film, it’s emphasized that she’s the ideal girlfriend for the deuteragonist, or second protagonist, Jake, played by Jesse Plemons, who is the younger version of the janitor.

There can be several interpretations of what’s actually going on, but the one previously described seems the most fitting. One of the ideas of the film is time and how it seems like it’s never moving or moving too quickly. The tragedy of the film is that our janitor has seemingly wasted his life and that most of the events are simply him fantasizing about what he could’ve done with his life, one with a caring and talented girlfriend, loving parents, and a very successful career in theater.

A lot of the film is told from her point of view, despite this taking place in the head of old man Jake. The film seems to get carried away with the idea of this all being one big fantasy. Lucy is portrayed as though she is slowly chipping away at this fantasy. Landscapes are constantly changing, people disappear or grow old in a matter of minutes.

The film is categorized as horror/drama, but there’s a distinct lack of horror. There’s certainly suspense and a sense of build up to what one would think is a jumpscare, but turns out to be Lucy discovering something that contributes to the overarching purpose that this is a dream.

There’s also a lot of odd dialogue choices. This really throws the idea of subtext out the window and trades it for long winded bouts of characters reading whole essays that are clearly meant to be about the character they’re talking to. It lacks subtlety and nuance most of the time. Subtlety and nuance is extremely important when writing dialogue for the film because it feels like two people are actually talking to each other. Think of it as you would a normal conversation. Sometimes people don’t say what they’re actually feeling or they carry a certain tone or mood, and that should be carefully woven into the dialogue.

You could contribute the lack of these elements to our janitor not possessing a lot of basic social interaction practice. The idea is that he’s been lonely his whole life, in need of any significant figures in his life, so it is sensible to believe he wouldn’t be very good at exercising his feelings in a nuanced manner. Still, it seems like a cheap excuse for a lack of delicacy when it comes to dialogue.

This is a product you might want to watch twice or even three times to fully comprehend some of the execution of ideas in the film. “I’m Thinking of Ending Things” explores thought-provoking ideas that will certainly make audiences question the value of time and life itself. It’s a beautifully made film despite its jagged edges.