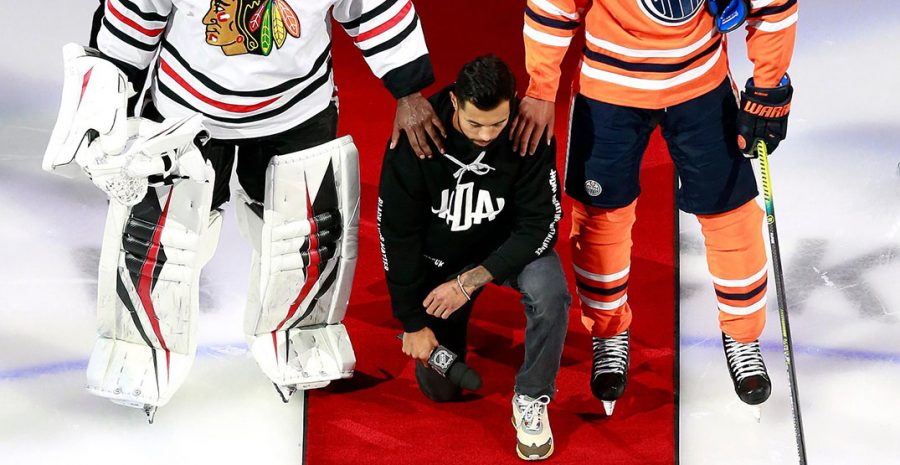 The ever-growing vocalization of social justice along with the stance of players brave enough to step forward throughout all major sports leagues caused attention to be shifted to the Black Lives Matter movement. The shift in attention all started after the shooting of Jacob Blake that occurred on Aug 23. All four well-known major sports leagues took a step forward using their platform to shine a light on racism as well as the toxicity and dangers it causes in our society.

The NHL, MLB, and NBA, who had games in motion at the time, postponed their games, while the NFL, without any games to postpone, still reacted to the shooting. The NHL was late to the cause and it took an uproar from fans on social media to see any games postponed.

The NBA was the first major sports league to step forward about the matter, with the Milwaukee Bucks leading the cause, being the first team to be vocal and to postpone a game. Following the Bucks, games all around the league were then canceled from Wednesday the 26 of Aug to Saturday the 29 of Aug.

Before the season resumed, the NBA and National Basketball Players Association pledged $300 million to start the NBA Foundation, a program that wants to create greater economic empowerment in the black community. Along with that, Brooklyn Nets owners, Joe and Clara Wu Tsai, offered $50 million to help fight injustices.

During the NBA protest, the NBA pact with the players union also asked for the league to collaborate with its broadcast partners to include more advertising that highlights social justice initiatives.

The MLB followed the NBA’s actions with six teams and several players refusing to play. In all, seven games were postponed to shine a light on what occurred and the progress that needs to be made not only within the country, but in society, as well.

A statement from the Milwaukee-based Brewers announced that they decided to not play that night and wanted to draw attention to the racial injustice and systematic oppression in the world. After the Brewers’ announcement, several other teams followed suit and also opted out of playing that night.

The Miami Marlins and New York Mets made their statement by not only refusing to play that night but also stepping out of their respective dugouts and observing a 42-second moment of silence. Stephen Tarpley of the Marlins also placed a t-shirt that read “Black Lives Matter” on the home plate before everyone went to their clubhouses.

The NHL had a rocky start to the path of speaking up about Black Lives Matter and the systematic oppression that all other leagues have already stepped forward about. After continuing play on Wednesday, Aug 26, when many other leagues already decided to postpone games, it sparked an outrage from fans and several players like Matt Dumba and Evander Kane.

Though late to the cause, the NHL postponed all the games that were supposed to take place on Thursday the 27 of Aug and Friday the 28 of Aug to the following Saturday and so on.

The Hockey Diversity Alliance (HDA), created earlier during the year by many players of color, were the ones who led this movement and have continued to progress with the NHL to continue the conversation about systematic oppression in the world and racism inside the sport of hockey.

The HDA was able to partner with the league to launch a program for young players of color in Toronto and work together on many inclusion committees that have a goal of encouraging diversity among pro and youth players, fans, and executives.

From this, players within the Hockey Diversity Alliance and outside of it became vocal about the matter and have used their platform to speak about Black Lives Matter and encourage change.

The NFL took its unique approach of wanting to show their respect and care with nine of the teams choosing not to practice during the following day as their season wasn’t active at the time of the shooting. Along with this, several teams released statements talking about the Black Lives Matter movement and explaining their decision as to why they canceled practice.

The Baltimore Ravens released a lengthy statement including names of victims of racial injustice, such as Jacob Blake and Breonna Taylor. The statement also listed ways of how people can step up and use their voice to help end racial injustice.

Many NFL players also fled to their social media and used their platform to speak about the matter and encouraged people to vote.

With all leagues, fans rejoiced in what was being done, while some were in great distress over the postponement of the games. From either side, the conversation about racism and social injustice needed to be had. As it’s not only a concept of politics but also human rights, which while the postponing of a few games may not end racism, it’s a step towards it being spoken about.

The players becoming vocal and showing concern also drove the leagues to start acting alongside players with organizations to encourage donating money, working with charities, and even voting amongst fans of the sport.

Though it’s not much, it’s a huge step forward in the sports world by showing fans they are welcome in the sport they may be a fan of no matter their race, though there is still much more work to be done in this aspect, alongside spreading awareness about the social injustice and systematic oppression in the world.