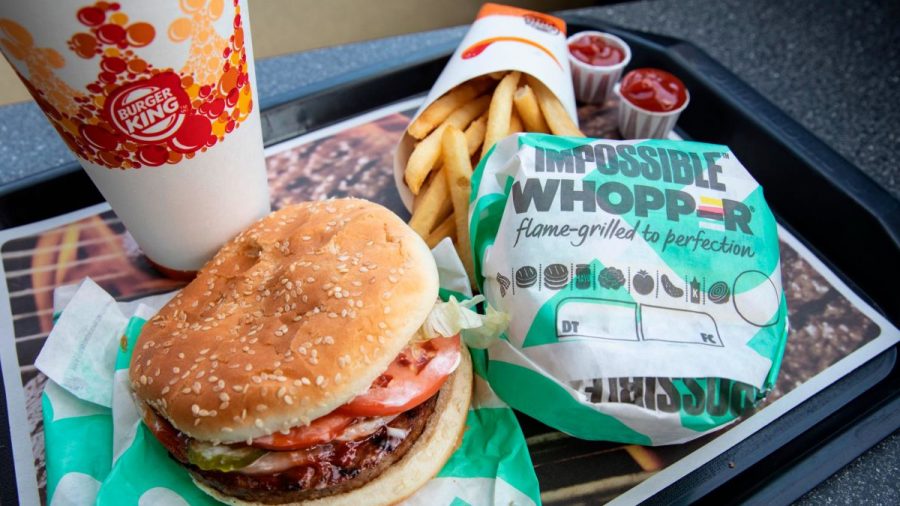 The Impossible Whopper is the hit new item on the Burger King menu.

Burger King has been a long time favorite for those looking for a quick juicy meal. Now they are taking a new twist on their most iconic item on the menu. On Aug 8, Burger King, through a partnership with Impossible Foods, began rolling out the Impossible Whopper in their stores nationwide. Its main selling point being that it is 100% Whopper, 0% beef.

The Impossible Whopper was made possible by Impossible Foods, a company whose goal is to cut back on animal agriculture globally. The way they plan to do this: replace animal meat with plant-based meat. Their scientists got together and created a mock meat that they claim looks, tastes, and smells just like the real deal. They call it the Impossible Burger, and it has truly cooked up a storm across the country. Multiple popular restaurants now offer the Impossible Burger, including Red Robin, White Castle, and even Little Caesars, which uses the meat on their Impossible Supreme Pizza. Since it was released in January, it has exploded in popularity, so much so that back in June, the company couldn’t keep up with demand, leading to a temporary shortage of the meatless burger.

Burger King found this creation’s success to be an enticing business opportunity. They had the idea of using the Impossible Food’s meat as an alternative to their regular beef found in Whoppers. Burger King saw this as a way to get people who follow plant-based diets to try out their signature burger, and so, the Impossible Whopper became possible.

Instead of beef, the patty contains soy, potato, coconut oil, sunflower oil, and heme. That last ingredient is crucial in the mock meat’s makeup. Heme is an iron containing molecule which is found in both animals and plants. It’s what gives meat its taste.

Does this mean that it is vegan? Not necessarily. First off, the Impossible Whopper itself certainly isn’t vegan friendly, as the burger comes with mayonnaise. But as for the patty, its ingredients would deem it plant-based diet friendly, however, vegans may be distraught that it is cooked on the same broiler as the beef ones. In response to this, Burger King is now offering to cook the Impossible Burger using a non-broiler method of preparation available upon request.

There are many skeptics about the Impossible Whopper. For people who have enjoyed more than a few beef Whoppers, it is quite a challenge for a mock burger to meet the regular Whopper’s delicious taste.

At first glance, the Impossible Whopper has the look and feel of a regular beef patty. The first noticeable difference, however, is that it lacks the greasy juice that coats a typical Whopper. As for its smell, it is notably less strong. But the real question is, how does it taste? Does it match the flavor of its beef brethren? By the first bite, the Impossible Whopper does not disappoint. It has a rich taste with a smooth texture that feels comfortable on the tongue, but anyone who is a regular Whopper customer would be able to tell that it’s different. Also, it is certainly not as juicy, which is to be expected from a meatless patty. But perhaps the greatest taste difference is that the Impossible patty has a subtle metallic taste, which may be due to the fact that it is attempting to replicate the distinct taste of beef.

After eating it for the first time, it was entirely satisfying. The future for mock burgers such as this brainchild of Burger King and Impossible Foods is bound to dominate the market, as consumers search for foods that favor a plant-based diet. If there is anything the Impossible Whopper has proven, it’s that a good burger doesn’t have to be made from beef.