Captain Marvel brings audiences ‘higher, further, faster’ than ever before 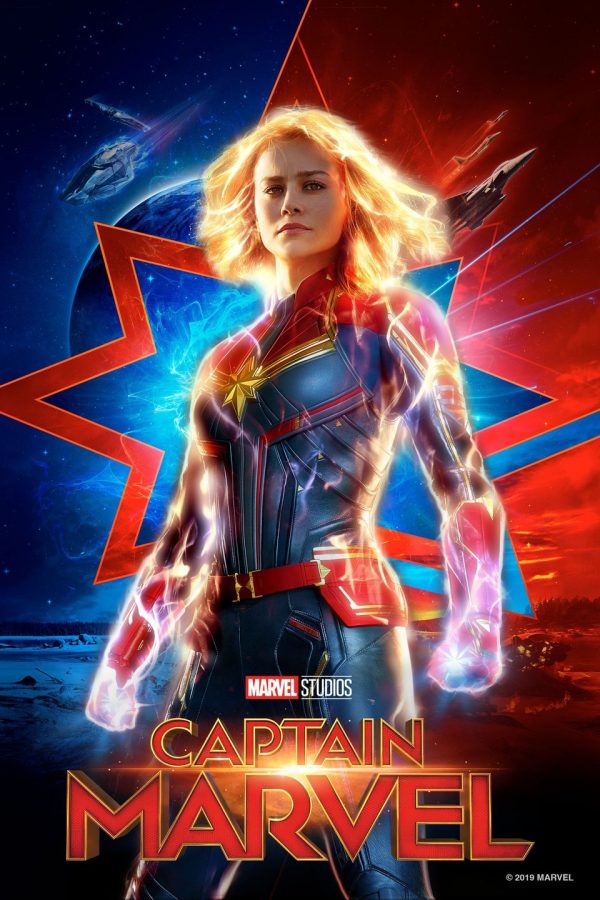 2018 was a big year for Marvel Studios. It was filled with great triumphs like their 10 year anniversary, but it was also met with great sadness. Marking the first release since the passing of Marvel creator, Stan Lee, Captain Marvel starts with a touching dedication to him and his work. The usual clips of iconic scenes from films throughout the years were replaced with small moments of Stan to form the Marvel logo, as a thank you for all he did.

After Avengers: Infinity War left fans with a jaw-dropping cliffhanger, the release of a new Marvel film has been tremendously anticipated. Captain Marvel hit theaters Mar 8 making history as their first independent film centering around a female superhero.

Brie Larson is making a big comeback in Hollywood 4 years after her performance in “Room” won her an Oscar and several other awards for Best Actress. She stars as ‘Vers’, a Kree warrior from the planet Hala, along with Samuel L. Jackson reprising his role as Nick Fury.

Since the release of Avengers: Infinity War, fans have been creating numerous theories as to what will happen to their beloved superheroes. Captain Marvel reveals several easter eggs as to what might happen in the upcoming film, Avengers: Endgame, and links a great deal of the iconic elements of Marvel to Carol Danvers and her story. She is the main reason behind a great majority of the happenings in the Marvel Cinematic Universe, and this film unveils the fact that she is a big part of what Marvel is, and what it has the potential to become in the future.

Captain Marvel opens on flashes of Vers’ memory of an accident that occured 6 years ago, although she can’t remember exactly what happened nor can she recall anything before that.

These recurring glimpses leave Vers frustrated and lead her to take her irritations out on training with her fellow Kree warrior and friend, Yon-Rogg, played by Jude Law.

It is during the training sessions that Vers loses control of her emotions, which are directly tied to her abnormal abilities. Going against nearly every cliche theme, she is consistently told that if she doesn’t learn how to think with her head instead of her heart then her powers will be taken away.

The Kree are a race of hero warriors who serve a Supreme Intelligence that rules over Hala. They are meant to train and protect their planet in the war against the shape-shifting alien race, the Skrulls. Vers tirelessly works to get the Supreme Intelligence to assign her a mission, and it ultimately works.

Vers jumps right in and accompanies a group lead by Yon-Rogg to a neighboring planet to rescue an exposed spy and terminate any Skrulls that might be habitating there. Falling for their shape-shifting tricks, she is captured and taken to their ship. They use a device that gives Vers glances of a different life in which she was a human Air Force Pilot on Earth. Confused, Vers escapes to 1995 Earth and tries to find the missing pieces of her life and figure out who she is, with the help of Captain Fury of SHIELD.

Together they follow clues, all the while battling the occasional Skrull, until they lead them to Maria, Vers’ best friend in her previous life, and with her insight Vers learns that her name is actually Carol Danvers and she has been presumed dead for 6 years.

She was in a plane accident that also killed Dr. Wendy Lawson, played by Annette Bening, and it isn’t until a Skrull shows up at Maria’s house that Carol finds out the whole truth.

Like Ronan in Guardians of the Galaxy, the Kree’s mission is to exterminate the entire race of Skrlls and before her death, Lawson was actually a Kree inventing an energy source that had the ability to help them escape and find a home.

6 years ago, Carol was taking Lawson to her laboratory in Earth’s orbit when they were intercepted by a Kree spacecraft and shot down. On the ground, Lawson tells Carol of her origin and is adamant that they can’t get the energy source before Yon-Rogg emerges and shoots Lawson. Left on her own, Carol breaks the source and absorbs it which gives her the all-powerful abilities she is known for.

After she learns all of this, Carol feels more lost than ever and it takes a good talking to from Maria to get her to realize that she needs to end what started a long time ago. The group travels to Lawson’s laboratory and reunites the Skrull with his family, and they just so happen to find the Tesseract as well, which makes a constant appearance throughout the MCU.

When Yon-Rogg arrives at the lab, he detains the Skrulls and gives Carol to the Supreme Intelligence. There she realizes who she is and it isn’t who the Kree want her to be, and with this new belief in herself she is able to finally control her powers.

At this point, there isn’t anything she can’t do and Carol easily defeats the Kree and the Supreme Intelligence. When it comes down to Yon-Rogg, however, she claims that she has nothing to prove to him and sends him back to Kree to tell them that she is going to end the war and the Kree are not going to come up on top.

Captain Marvel ends with Carol leaving her life on Earth behind again, but this time she is going to help the Skrulls find a home. Overall, this ending and the movie’s plot twists were very predictable and a little cliche, which isn’t exactly normal for a Marvel Studios film.

The script didn’t feel like a Marvel movie, it was more cheesy than previous films. Although, it was a fun movie with great comedic aspects from Samuel L. Jackson’s Fury and his friendship with the cat Goose, it gave off more of a family movie vibe than a superhero.

In modern society’s climate, with several feminist movements underway, Captain Marvel displays an important message to young and inspiring girls. Carol Danvers and Maria are both much needed representations of strong women, who do not need men to make them powerful.

Danvers shows both young girls and adult women that they can do anything that they set their mind to. She is a prime example that they do not have to prove their abilities to any man that doubts them.

Brie Larson’s portrayal of Carol Danvers was fantastic, her and Jackson’s chemistry was very noticeable through the screen. Captain Marvel was a good movie with numerous notable aspects, but it isn’t jumping to favorites lists anytime soon.

Carol Danvers is said to have a very important role in the upcoming Avengers: Endgame and her part in the storyline is greatly anticipated.