Anthem fails to add anything of value to the MMO genre 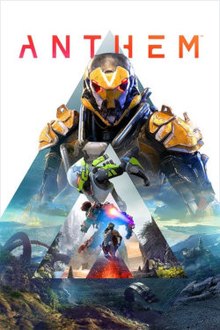 Imagine this, you are one of the last remaining humans on earth flying through the air in a mech style suit fighting through thousands of different monsters and other humans trying to kill you. This is the elevator pitch for infamous developer Electronic Arts new game, “Anthem”.

Before you get into Anthem itself, you have to know the stigma and hype surrounding it. Another game with a similar base plot (except it’s aliens instead of monsters and no mech suits) called “Destiny” was the biggest game of this very specific type of game. It featured a single player experience except it showed other players fighting in the same area as you without truly being your teammate. This style of gameplay is called  MMO or massive multiplayer online.

Another background element that had people worried about was EA’s track record with making their games pay to win. With one of their previous games Battlefront 2 the game was extremely pay to win because the loot box system they had gave players better guns and characters; while players who didn’t want to put money into the game were left with nothing. You could only reach these boosted players by putting hours of grinding into the game, but even then you really never reached them.

With the promise of dethroning a king and their troubled past EA did not have a great start to their reveal of “Anthem”. The fanbase was very split because half thought this was another cash grab attempt while the other half were hopeful that someone could make a good MMO and take all the good things from destiny and build on them.

The reviews of pre-release gameplay praised the combat saying it’s something they have never seen before. This gave even more hope to the gaming populous by reinforcing the idea that the game was going to bring (much needed) original content in the gaming industry.

When the game officially came out it was the complete opposite of expectations, with an extra dousing of disappointment. The launch dates alone left a bad taste right out the gate. EA decided to release the game on three different dates instead of just one.

This led to massive confusion from fans and not many people realized this was even happening because EA announced it not even a week before release. There was now one release for Origin Access members, Preorders, and finally a global release for neither categories.

If that wasn’t bad enough there are so many extra things that destroyed this games chance of being good. First on the PS4 side of things, there was a huge bug that broke players PS4 when they tried to start up the game. There are ways to get around it now, but this was a huge problem as many PS4 owners now had broken consoles.

That’s not the only bug however, in the game itself cutscenes would cut out and skip themselves leaving nothing of the story for the player to enjoy because they couldn’t even watch any of the important plot points or monologues. There were also many landscape bugs where textures wouldn’t even load and glitching through the floor is a good possibility.

Now for the actual gameplay, the shooting and abilities are very satisfying, but only for a short period of time. After two hours of the same thing the explosions and bullets seem repetitive and boring. You eventually start to realize the game is just a really long Michael Bay movie that is all seasoning and no meat.

The story doesn’t seem to complement the game whatsoever because of the awkward in combat dialogue lines that sound like someone who has never acted before read them. If you can even get to the cutscenes without them breaking, they aren’t even worth the anxiety as they are stereotypical and bland making you not even care that they could cut off at any time.

Overall Anthem left a huge mark on the gaming industry for how not to make a MMO and to play test your game before you release it.