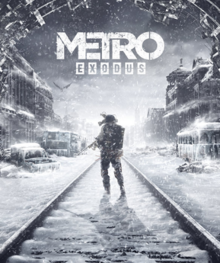 Survival, fear, and anxiety are the perfect adjectives to use for 4A Games and Deep Silver’s new game Metro: Exodus. Metro: Exodus is a first person shooter with survival horror and stealth elements. It is the third installment in the franchise which also based a series of novels by the same name by Dmitry Glukhovsky.

The series overarching setting is a post nuclear Russia where everyone lives in the underground metro system to escape the transformed animals and radiation on the surface while also dealing with other hostile factions in the metro.

To take a step back and quickly go over the first two games is important because of how far they have come. In “Metro: 2033” they mainly focused on the gameplay and didn’t have much of a story. Not to say the story wasn’t good, it just felt underdeveloped compared to the beautiful landscapes, creature designs, and overall gunplay.

In the second game “Metro: Last Light” they had already done enough to the gameplay so they put that in the backseat and completely focused on the plot and cast of characters. In “Last Light” you cared for the characters and the twists and turns actually made you feel some kind of emotion compared to the first where nothing memorable ever happened.

However, the game put the gameplay a little too far in the backseat because the carried-over mechanics felt lazy and repetitive. They didn’t try to introduce anything new making the overall feel disappointing.

Finally, we get to Exodus which takes everything they learned from the first two games and enhances them to their fullest potential. Right at the beginning of the game they plunge you into a dirty and gloomy sewer with no end in sight. The player goes through the sewer while noises from seemingly nowhere and spider webs cover the landscape instilling a crippling anxiety fueled fear.

This proved the developers didn’t want to make the same mistakes that “Last Light” did so they made sure to add detail every little thing. The environments have the slightest things to dust particles having physics instead of just staying still in the air. Then they have huge skyscrapers adding to the apocalyptic scene perfectly. They also added an in-game weather, day, and season cycle in the game meaning in real time the game changes between night and day, winter and fall, or rain and snow.

The developers didn’t hold back with the mutations as their are new species of monsters on the surface that are more fantastically but still seem plausible from today’s animals. They have huge beasts that make you feel small and weak while also having crawling small enemies that scurry across the floor to get to you to handle fights very differently from area to area.

While the gunplay couldn’t get better they added a crafting and upgrade system to make the item aspect a little more interesting than previous installments. These mechanics certainly aren’t anything new or ground breaking, but they add something to a bland part of the game.

Finally we have the numerous characters and the overall plot. Like the second game they fleshed out the characters as much as possible to get you attached and familiar at the same time. One thing they did perfectly in past games was make the villains truly evil and make you root for their downfall as much as possible.

They make them just as diabolical giving them the perfect amount of edge where it’s not stereotypical or cringy in any way. The returning friendlies are just as charming and hilarious as the first two games. Anna went from not just Artyom’s partner on the surface, but is now his wife. Their chemistry is well written as there is never lines that feel uncomfortable or awkward. It also never skirts the line of weird conversations that don’t go anywhere or are unnecessary to character building or plot.

Overall “Metro: Exodus” is the obvious culmination of everything good about the Metro franchise conveniently packed into the perfect single player experience.